Halloween is almost here and for those of you planning to sit in your couch eating sugary treats, knocking back a cold one and handing out candy to ghost and goblins I have a list of things on Netflix you need to check out leading up to all All Hallows’ Eve. Documentaries, cooking shows, animated flicks, classics and new originals that will make your hair stand up.

The Haunting of Hill House(series)

Netflixwelcomes you to the Hill House. A re-imagining of the iconic horror novel about 5 siblings who grew up in the most famous haunted house in America.

If the opening dialogue in the trailer from the children isn’t creepy enough for you then just wait and dive into the rest of the trailer where things really start to unravel.

The Netflix horror series comes from director Mike Flanaganwhom you probably know from such films as Oculus, Ouija: Origin of Evil, Before I Wake, Gerald’s Game (another Netflix film) and Hush. The series is 10-episodes and kicks into gear about 4 -5 episodes in.

The film follows a group of college friends reunite for a trip to the forest, but encounter a menacing presence in the woods that’s stalking them. Sounds pretty simple right? At the core it is, but as we dive deeper into the story and the forest things become more and more mysterious and the mind f*ck begins.

If there is one thematic through-line of Jeremy Saulnier’s films it is the exploration of this truth: beneath our cellphones, our television, our internet, our civilization lies a secret; humans are animals.

The film concerns itself with an author, Russell Core, who is an authority on wolves and their behavior. Played by the always effective and stoic Jeffrey Wright, Core travels to Alaska to help a bereaved mother find the wolf that has abducted her child. However, the actual wolf, and the surrounding plot, is the macguffin. Though the film dresses itself as a procedural, as a mystery/thriller with a narrative puzzle that will be solved by the end of the film, it is not this kind of movie. It is a visceral exploration of that ‘human as animal’ theme. While his previous films deal with the animalistic violence of humanity, Hold the Dark stands apart from those film in its blatant audacity. Subtly is not what this film is after.

For 19-year-old Jay (Maika Monroe), the fall should be about school, boys and weekends at the lake. Yet after a seemingly innocent sexual encounter she suddenly finds herself plagued by nightmarish visions; she can’t shake the sensation that someone, or something, is following her. As the threat closes in, Jay and her friends must somehow escape the horrors that are only a few steps behind.

Tapping into psychological scares while combining the urban legend monster aspect and paranoia of Bloody Mary, Candyman with a heaping of Nightmare on Elm Street. It currently sits in the high 90’s and is certified fresh on Rotten Tomatoes. For a horror film to get a high grade from the mainstream critics community sings high praise.

In this exquisitely made and terrifying new horror film, the age-old concepts of witchcraft, black magic and possession are innovatively brought together to tell the intimate and riveting story of one family’s frightful unraveling in the New England wilderness circa 1630. New England, 1630.

Upon threat of banishment by the church, an English farmer leaves his colonial plantation, relocating his wife and five children to a remote plot of land on the edge of an ominous forest – within which lurks an unknown evil. Strange and unsettling things begin to happen almost immediately – animals turn malevolent, crops fail, and one child disappears as another becomes seemingly possessed by an evil spirit.

Told through the eyes of the adolescent Thomasin – in a star-making turn by newcomer Anya Taylor-Joy – and supported by mesmerizing camera work and a powerful musical score, THE WITCH is a chilling and groundbreaking new take on the genre.

When Cole stays up past his bedtime, he discovers that his hot babysitter is part of a satanic cult that will stop at nothing to keep him quiet.

This is truly a modern day throwback to clever 80’s horror comedy that gets it right and hits on every beat. Featuring a trope of characters that fit the cliche horror bill each one bringing something unique to the Netflix Original. Sometimes you find yourself rooting for the cast of characters but often times you want to see how Cole will react in this situation which is ripe for a Home Alone attack style to defeat the satanic cult that is now babysitting him during a night of terror.

Shot on a shoestring budget by Mark Duplass and Patrick Brice, Creep takes a documentary film style approach and nails it. Lumping it into found footage is fair and if you do this is one found footage film that finds a way to allow the style to do a lot of heavy lifting that slowly evolves into another kind of madness.

It starts out with Aaron (Patrick Brice) answering an online ad and drives to a stranger’s house to film him for the day. The man wants to make a movie for his unborn child, but his requests become more bizarre as the day goes along. You also get introduced to a third character in the film that fans adore called Peachfuzz. In fact, that was the original name for the film before it was ultimately changed to Creep.

The Curious Creations of Christine McConnell

Martin Freeman + Zombies + Baby = Heartbreaking. Amid a terrifying pandemic, a father searches the wilds of Australia for someone willing to protect and care for his infant daughter. The film follows Andy (Martin Freeman) as he journeys across the Outback, in search of a family with whom he can leave his young child before. Why is he doing this, you may ask? Turns out he has been bitten and infected by a zombie like virus and has only 48 hours until he turns.

A film about class struggle or racism can be a real downer. A film about flesh-eating monsters that happens to allude to the separation of class and race can be a damn good time. Train to Busan, the new film by Sang-ho Yeon, is the kind of zombie movie that the film criticism brain trust has praised. It is the kind of film that gives you tension, gives you blood-thirsty monsters, gives you a damn good time, and also gives you a serious case of social and economic introspection.

This classic Stanley Kubrick film combines style and slow burn substance in a character study into the depths of madness forced through isolation and psychosis. While the stories about making the film and dissecting it are just as interesting as the subject matter itself – there is no denying this film is iconic and classic. A required viewing for the Halloween season.

While trying to spice up their marriage in their remote lake house, Jessie must fight to survive when her husband dies unexpectedly, leaving her handcuffed to their bed frame. Let’s be honest we have all been there before? Am I right? No. Okay.

Another Mike Flanagan directed project lands on our Netflix list. Written by Flanagan and  Jeff Howard, it is based on Stephen King’s 1992 novel of the same name.

The red hot true-crime Netflix Original series ‘Making a Murderer’ gripped the nation. It was just as engrossing as it was confusing who you should be rooting for. Well, now it is back with a follow-up to the original series to see where Steven Avery is now and if he can still become a free man. What really happened? Netflix invites you to explore the case once again. The convictions were only the beginning. The worldwide phenomenon continues.

Back in 2017 the adventures of the Belmont family and their eternal war against the undead Count and his minions arrived in the form of a sleek animated series airing on Netflix and produced by WOW! Unlimited Media, Federator Networks, and Federator Studios. Netflix is preparing for a season 2 release soon with double the episodes!

The Chilling Adventures of Sabrina

If you’ve been following along with the developments on Netflix’s upcoming Chilling Adventures Of Sabrina, you know ever new piece of news is better than the last.

Move over Melissa Joan Hart, there’s a new witch in town. You just knew with the involvement of the people behind Riverdale, that things would turn out good.

“Chilling Adventures of Sabrina imagines the origin and adventures of Sabrina the Teenage Witch as a dark coming-of-age story that traffics in horror, the occult and, of course, witchcraft. Tonally in the vein of Rosemary’s Baby and The Exorcist, this adaptation finds Sabrina wrestling to reconcile her dual nature — half-witch, half-mortal — while standing against the evil forces that threaten her, her family and the daylight world humans inhabit.”

Now we all just need to twiddle our thumbs until October 26th, before a Halloween binge-a-thon can occur.

There you have it. A list of all things creepy, diabolical and downright spooky. What are some of your Netflix picks we should be watching? Tell us in the comment section below. 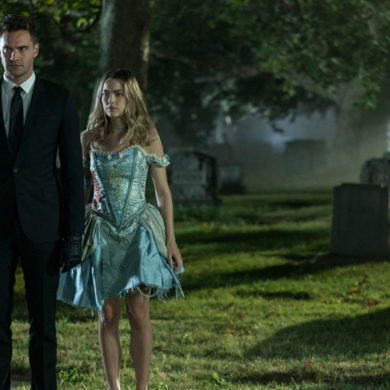