Gareth Evans has a way of capturing brutality. Admittedly, that may not sound overly exciting, but when it comes to action, bloodshed and carnage, few are better at splattering it across a large canvas. After dominating the action realm of cinema with The Raid and The Raid 2, he now turns his attention to blood-letting of a different kind: British folklore horror. His new film, Apostle, hits all the highs you’d expect, stumbling only a few times in the process.Its bolstered by a haunting score and absolutely stunning cinematography. This is the work of an assured and confident director. One who’s happy to surprise audiences willing to pigeonhole his capabilities.

Thomas Richardson (Dan Stevens), long thought dead to his family, gets an overdue reunion with the worst deal of news. His sister, (Lucy Boynton) was kidnapped weeks prior. As opposed to a random unfortunate twist of fate, it turns out the abduction was a calculated ploy to exact a hefty random. Even worse, the captors aren’t a career criminals, but rather a cult secluded on a distant island. With the news utterly decimating and breaking the father, the family lawyer sends Thomas as a spy in his stead. His orders are simple, remain hidden among the flock until he can ascertain the location of his sister, but at all costs do not pay the ransom requested. A relatively simple and easy task, or so it seems.

The jump from The Raid films to Apostle is an easier transition than most may expect. His section of V/H/S 2 was a madcap dive into cult horror, fusing perfectly with his action pedigree. Stapling those stylistic touches onto the framework of a turn off with century British trappings works equally as well. The leader of Erisden is the enigmatic Malcolm (Michael Sheen). He claims to hear the voice of the island’s goddess, who promises a life free of war and wants. As with any religious sect, there’s strict set of tenents the faithful must live by. Don’t be late to church. Stay inside after the evening bell rings. Leave out your nightly offerings. Above all else, do not sin. Those who stray are made an example of. The results of which are just as deliciously graphic as they are horrific and unfortunate.

Apostle isn’t necessarily something that hasn’t  been seen before. The cult genre is well worn territory by now. At times elements don’t fully coalesce because of this fact. Part of that rests upon the shoulders of the film’s supernatural aspect. Popping in and out of the story, before fully overtaking things in the third act. Evans all in with every facet of the film and it threatens to be Apostle‘s undoing. A runtime over two hours doesn’t help matters either. As spooky and off kilter as things feel surrounding the cult, Evans and co. are too quick to show their hand. Specially when it comes to how much of the cult’s beliefs and superstitions are real. Ground rules are either ill-defined or never truly embraced. Leaving only a visual impression, rather than an emotional one.

As much as Apostle owes to something like The Wicker Man, the third act feels more of a meshing between 2010’s Black Death and either of the Silent Hill . Not entirely a miscalculation, yet the shift in tone feels messily handled. The creature effects are beautiful, yet fleeting in their time on screen. The execution of the action and set pieces in this section are still rousing, never threatening to lose the audience. It’s easy to notice though just how much this part is a tricky high wire act. One where things do eventually teeter off. What’s commendable is how Evans keeps chugging forward, almost content with minor missteps that crop up, as long as the cumulative whole doesn’t suffer.

Apostle may have it’s share of slower and shaggier beats, but never enough to fully halt it’s propulsive drive. The first half works as something of a slow burn with the final 45 minutes a relentless roller-coaster. Where the insanity and blood flow freely, to startlingly good effect. If the idea of a period cult drama sounds like Evan’s may be working out of his element, worry not. How he manages to go about it is handled just as naturally as one would expect. The violence hits just as hard as his other works, even highlighting the possibility that good action sequences can find their home in even the unlikeliness of films. What’s more, it strengthens the argument that some NetflixOriginals really deserve to be witnessed in a theater, on the largest screen possible 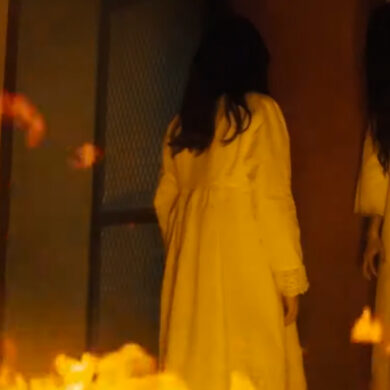