The Invitation has impressed audiences at SXSW, Dismember the Alamo and at Panic Fest.  After striking a deal last spring with Drafthouse Films after SXSW it has been on my 2016 most anticipated films list . The psychological thriller from Karyn Kusama is a slow burn paranoia film that will keep you guessing and make you feel like you are part of one of the most awkward dinner parties of all-time. Then it falls off a cliff and really gets batshit crazy. Check out our short Q&A session with Karyn below.

Why did you want to direct The Invitation?

Karyn Kusama: I like movies that reward our patience and curiosity. Phil and Matt’s script operated on a fascinating razor’s edgeâ€”for a long while functioning as a paranoid drama, but always teasing the possibility of an explosive or completely surprising outcome. Movies that are bold enough to cross breed their genre mechanics like that really interest me a lot, and their script delivered beautifully on that potentially disastrous urge. I loved the challenge of it, and I felt completely engaged in the story. For better or worse, I feel I’ve been in social situations in Los Angeles that have challenged my sense of safety and/or sanity, and I thought I knew how to express that anxiety. I sympathized with Will, our main character, while also recognizing that he might have a fragile hold on reality. I liked that dichotomy in the viewerâ€™s relationship to him. And beyond Will, I found something compelling and relatable about all of the characters even as I found myself disagreeing with them or feeling afraid of them. I liked the economy of the script and the blunt poetry of the narrative. And more than anything, I felt that the violence in the film was placed within a humanistic context that allowed me to feel the toll of the violent acts; I didn’t feel numb to the action, but rather alert to and conscious of it. The violence is born from a chasm of terrible suffering, which gives it a different meaning. In genre storytelling that kind of emotional care can be a rare thing to experience, and I wanted to push myself to see whether the compassionate spirit of the script could survive the translation to the finished film. I hope I’ve done justice to that spirit.

Can you talk about choosing the house and the desire to set the story in a single location?

Karyn Kusama: Using a single location is incredibly challenging on both a practical and an aesthetic level. I wouldn’t do it again unless I knew that the choice was serving the story. In this case, the single location had its own narrative meaning—it was essentially a haunted house for our main character, and it made sense to trap him within it—but it also created the opportunity to twist the screws of suspense in the film as we trapped all the characters within it. It gave me a chance to explore a location as I would the psychology of a character: how did rooms function in the past, and how do they function now? What do we carry from the past, and what do we shove into a closet? These questions became really interesting in the context of exploring every room of the house, because each room had a history and a story to it that related directly to Will’s investigation of the past he shared there with his ex wife. When we were location scouting, we were looking for a few things: enough space to reasonably contain our cast, a sense of taste and scale to the bones of the house, and a nice relationship to the outdoor space with an opportunity to look out at the larger landscape of the Hollywood Hills. It was actually a pretty tall order. But we found a place that offered us a lot of what we needed, and on top of that it had all this dark wood throughout the interiors, which gave it a warmth and a classiness, but also became appealingly oppressive after a while.

Are there any single location, compressed-time period films that inspired you?

Karyn Kusama:Thomas Vinterberg’s The Celebration was certainly a touchstone for us as we talked about our film. While we knew we were traveling in a different direction on a story level, we admired the unraveling of narrative layers in that film. It had black humor lacing dark drama, which was instructive for us, as well. It’s a great movie.

Since it’s such a claustrophobic, character-driven film, the chemistry between the cast
is key. Can you talk about the casting process?

Karyn Kusama: Casting took some time, and it was definitely a process. Once we anchored the film with Logan Marshall Green as Will, though, the rest of the cast came together quickly. We discovered that a lot of the actors we chose already knew each other or had already worked together in some capacity, so depicting a sense of familiarity and achieving that shared history was actually easier than I would have anticipated. I like actors with faces I just want to keep looking at, and I was blessed by every member of the cast in this department. On top of that, everyone showed up to set every day with an eagerness to explore the story and to do their best work. They are all terrific people and deeply talented actors. We started to think that we had formed our own little theater troupe—and, in fact, we had.

There are some uncomfortable moments in the film that arise from the violation of etiquette in social situations. Can you talk about how that theme fits into the story and general sense of unease?

Karyn Kusama: What I loved about this story was its exploration of both human instinct and our ability to live in denial: the two sides of one coin. Social etiquette is a tool of social control, sometimes allowing us to manage the tendrils of anxiety or danger that creep into our daily lives. The Invitation is definitely trafficking in the grim consequences of not listening to that little voice in the back of our head. Being polite has a purpose in life, but sometimes we have to transgress the boundaries of etiquette to survive (or at the very least to be our authentic selves). Our nightmares become more potent if we pretend they don’t scare us. This movie is populated by characters whose denial—the denial of their suffering or of the reality in front of the —has failed them. As coping mechanisms, both denial and social etiquette fail all of us at some point or another. The Invitation is a very extreme example of that scenario. 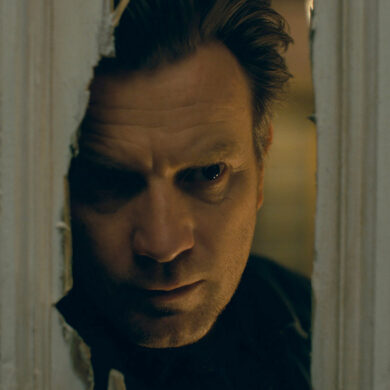