Octavia Spencer Is Wonderfully Crazy In The First Trailer For ‘Ma’

Once in a blue moon (i.e. couple times a decade), an interesting thing happens in the entertainment industry. Two movies, made by entirely sets of people, come out in the same year, that feel vaguely similar. Sometimes it concerns the destruction of the planet (Deep Impact & Armaggedon) or natural disasters (Volcano & Dante’s Peak). Other times it’s cute pigs (Gordy & Babe). Ocassionally it even deals with real life people (Tombstone & Wyatt Earp). In 2019 the connection is lonely ladies, who are more than a little crazy, playing a dangerous game with teenagers. A couple weeks back we got a trailer for Greta, starring Isabella Huppert and today we have a trailer for MA, starring Octavia Spencer. Trust us when we say you need to see this.

Here’s the rather lengthy official synopsis, filling you in on anything you may have missed above:

“Octavia Spencer stars as Sue Ann, a loner who keeps to herself in her quiet Ohio town. One day, she is asked by Maggie, a new teenager in town (Diana Silvers, Glass), to buy some booze for her and her friends, and Sue Ann sees the chance to make some unsuspecting, if younger, friends of her own. She offers the kids the chance to avoid drinking and driving by hanging out in the basement of her home. But there are some house rules: One of the kids has to stay sober. Don’t curse. Never go upstairs. And call her “Ma.” But as Ma’s hospitality starts to curdle into obsession, what began as a teenage dream turns into a terrorizing nightmare, and Ma’s place goes from the best place in town to the worst place on earth.”

This looks absolutely bonkers. In the best way possible. Blumhouse is attached to it, so you know there’s a good chance it’s a wild ride. Spencer is clearly having a ball here and that may just be what tips this film over the edge. Oh, did we mention this is from Tate Taylor, the director of The Help? Maybe we should have lead with that, as it puts a further insane spin on things. I mean, if that’s possible in a film that has a “normal” Juliette Lewis and an angry Luke Evans. This one just kind of snuck up on us and that’s the best sort of thing to happen when it comes to a stalker-thriller.

Do you dig the trailer? Are you ready for dueling crazy lady pictures? What’s your favorite deranged lonely lady film, ever made? Is there any sub-genre Blumhouse isn’t willing to tackle?Let us know in the space below. There’s no telling if this film will be any good, but we’re fairly certain Octavia Spencer will turn in a performance we’ll be talking about for months. Consider us completely sold. MA hits theaters on May 31st. Until then, we dare you to get into a staring contest with the film’s poster, without being a little creeped out. 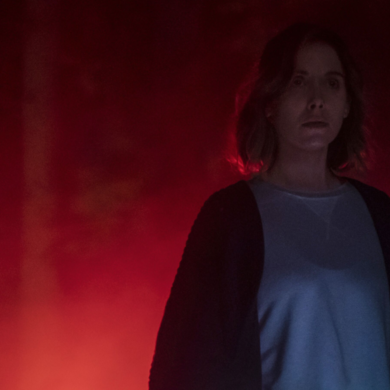