It is arguable that the Friday the 13th franchise is just one long line of fan fiction. From Part 2 onwards, the entire conceit is based on one brief scene, a cheap, throwaway, panicked fever dream of the antagonist at the end of the original film.

In the first film, Jason(your friendly camp maniac) is a simple MacGuffin a non-character that only motivates the action of the villain. From there, and from that aforementioned panicked delusion of the protagonist, every filmmaker that approached Camp Crystal Lake embraced and explored that fan favorite idea of a masked, immortal, overpowering, hulking, madman.

They embraced Jason Voorhees. And so did we.

And the makers of the fan-made film, ‘Never Hike Alone’ definitely have.

This film is every trope, every prototypical scare, every bit of the essence of Jason crammed into just under an hour.

There is not much substance here, or storytelling really, but the one thing that there is plenty of is a whole lot of fun. More amusement park ride than film, it takes us through a stroll of Friday the 13th’s past that feels both cathartic and nostalgic.

Complete with a cameo of one of the franchises most recognizable faces, this film walks us through so much Friday the 13th lore it gets a bit dizzying. Through all of this, though, what is at the center is what you would expect; Jason.

Hulking, but somehow stealthy, he stalks, hunts, taunts, and eventually attacks the protagonist. It is everything we have learned to expect and love.

Filmed with a combination of found footage and traditional film making, the pacing and atmosphere are effectively slasher-ish. It starts slow with plenty of exposition, getting all the information out of the way so the latter half of the film can really explore the gushing of wounds and the protagonist falling down in new and exciting ways as they flee Jason.

When Jason does arrive this film rivals any of the canonical Friday the 13th films and outdoes some of the weaker ones. It’s fast, it’s frenetic, and it is anything but boring.

Filled with an obvious sense of admiration and reverence, Never Hike Alone is a cinematic love letter to that hockey-masked killer we’ve all become so attached to over the years. It captures the magic, the silliness, and the dark sense of fun that the original films embraced. For that alone, it’s worth the time. 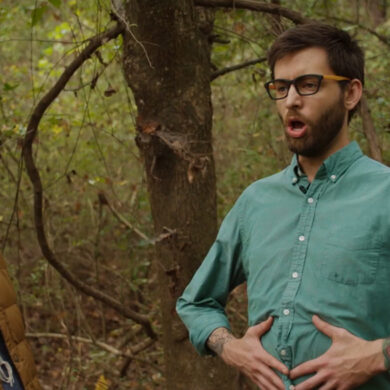