If you’ve been glancing over 2019’s slate of film releases, you may notice that one month is absolutely jam packed. You’d be forgiven for assuming we meant a summer month, but no, we’re looking squarely at April. Loaded with kids films, indie fare and superhero offerings, there’s something there for everyone. Not to mention, the film many people are gnashing at the bit to get a look at: a new adaptation of Stephen King’s Pet Sematary. Should you not be entirely sold on that picture, it’s highly recommended you check out the new trailer, released today. Slight warning though, if you want to avoid small spoilers, it does reveal a new twist they’re making this time.

This looks even better than the initial trailer released months back. There’s a darker, meaner tone used here. One that definitely ups the creep factor. Then there’s the big change here in who is inevitably killed and brought back. Some may see this as a disappointing diversion from the source material, but going from what’s displayed, it looks like it will work just as well. Either way you slice it, creepy kids are terrifying. And a reminder to always protect your ankles, at all cost.

As per usual, we’ve got a trusty official synopsis, to help those unfamiliar with the material:

“Based on the seminal horror novel by Stephen King, Pet Sematary follows Dr. Louis Creed (Jason Clarke), who, after relocating with his wife Rachel (Amy Seimetz) and their two young children from Boston to rural Maine, discovers a mysterious burial ground hidden deep in the woods near the family’s new home. When tragedy strikes, Louis turns to his unusual neighbor, Jud Crandall (John Lithgow), setting off a perilous chain reaction that unleashes an unfathomable evil with horrific consequences.”

We know trailers are often just glorified sizzle reels, but this one works like gangbusters. It leaves us very curious as to how the end result plays out. When there’s talent behind the camera like Kevin Kölsch & Dennis Widmyer (Starry Eyes), not to mention a screenplay by David Kajganich (Suspiria) and Jeff Buhler (The Prodigy), they should be able to do King’s tale of terror justice.

How do you, dear reader, feel about the trailer? Sufficiently creeped out or are you hoping the film goes even darker? Have you read the original novel before? Make sure to tell us, in the space provided below. We’ll be buying tickets immediately for this, as it seems this may just be one of the best mainstream horror releases of the year. Along with the likes of Us, Happy Death Day 2U, IT: Chapter 2, Doctor Sleep and Scary Stories To Tell In The Dark, this could be a banner year for the genre. More good big budget horror offerings is something we will always champion here at the site. Make sure to mark your calendars for April 5th, when Pet Sematary shuffles its way into theaters. 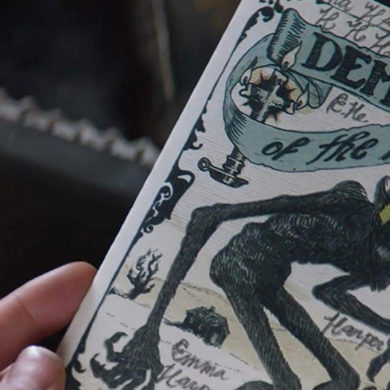