Things don’t go according to plan in the new red band trailer from Universal Studio’s upcoming psycho sexual thriller PIERCING. Starring Christopher Abbot (James White, It Comes at Night)and Mia Wasikowska (Alice in Wonderland, Crimson Peak), this twisted tale follows a man (Abbott) who seemingly heads away on business, but plans instead to check into a hotel and kill an unsuspecting victim.

We have the trailer and poster art below.

SYNOPSIS:
Reed (Christopher Abbott) is going on a business trip. He kisses his wife and infant son goodbye, but in lieu of a suitcase filled with clothes, he’s packed a toothbrush and a murder kit. Everything is meticulously planned: check into a hotel and kill an unsuspecting victim. Only then will he rid himself of his devious impulses and continue to be a good husband and father. But Reed gets more than he bargained for with Jackie (Mia Wasikowska), an alluring call girl who arrives at his room. First, they relax and get in the mood, but when there’s an unexpected disruption, the balance of control begins to sway back and forth between the two. Is he seeing things? Who’s playing whom? Before the night is over, a feverish nightmare will unfold, and Reed and Jackie will seal their bond in blood.

Catch PIERCING in theaters, On Demand and Digital February 1st! 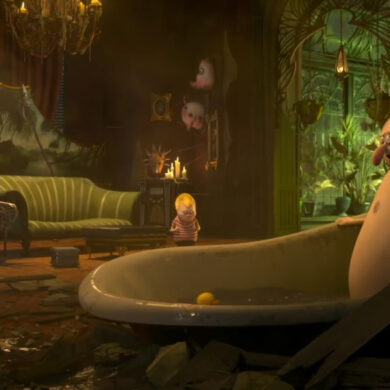