‘Prospect’ is an exercise in Indie filmmaking gone right. Zeek Earland Chris Caldwell  have created a fantastic chapter in the sci-fi landscape. It is everything I love about the creative process when filmmakers come together to create some unique and entertaining.

‘Prospect’ lives up to the sci-fi western sub genre it is placed in. It features a space race to obtain  precious resources that can only be mined from an alien-like crevice on a remote moon that resembles an earth like eco-system.

The story opens with a daughter and her father working together to try and get back to their home planet and harvest a precious resource to help with their financial trouble. Cee (Sophie Thatcher)is a young teenager whose character is trying to find her place in life while balancing the responsibility of growing up without a mother figure and how to come into adulthood essentially on her own. Her father, Damon (Jay Duplass) is left to care for his daughter without the help of her mother. Damon feels guarded and seems to be hiding something from Cee, but only with the notion to protect her, and protect her he must. While the relationship plays out a little rocky you can tell he cares a great deal for his daughter as they head out on their hunt in a strange foreign world. He teaches Cee how to mine and the dangers involved. She is quick to pick up on these tactics but before they can explore to much they are encountered by another group of individuals that are also prospectors. Cee is forced to go from a teenager to an empowered young woman fairly quickly.

This is where the central plot of the film is laid out in front of us.

Who can you trust? How will you react when your enemy becomes your only way to survive. Will you trust them for the better good or turn on them out of fear.

It is in this critical scene where we are introduced to Ezra (Pedro Pascal). He is part of a rival group also mining the space referred to as the “green.” Erza’s dialogue is thoughtful and drawn out as if you were listening to a prospector from the gold rush hand picked and dropped into a foreign alien land in the future. One part smooth and one part shifty, is it uncertain if he can be trusted. One thing that is certain is the chemistry between Sophie Thatcher and Pedro Pascal. It is perfect. One trying to gain trust while the other has a trust no one mind set. The back and forth help set the tone of the story and provide some tense moments of decision.

But the acting and chemistry are not the only thing to carry the film. The look and feel along with costume design setup up the strange but familiar world in a fantastic manner. The film itself has a retro feel at times but blends futuristic low tech pieces into the fold. Things that feel less tech driven and more engineered by hand. The costume design is a great example.  We see something almost totally different amongst every group of people we encounter. Each introduced a new aesthetic, which in most cases which could potentially go really wrong, but it felt like it all belong together in the same melting pot. From space made diving suits, 70’s retro jump suits to a tribal like feel they all work together to create unique character sub-sets.

During a Q&A session with the filmmakers it was revealed that many things were made by a tireless group of artist in the Seattle area working at their craft to perfect just the right look and feel for set pieces and costumes. A true exercise in trial and error and perseverance to turn what was once a short film from 2014 into a fantastic space journey that is both unique and intriguing.

Starting as a short film, now a feature film with its world premiere at SXSW, ‘Prospect’, feels like the kind of film that could also double as a pilot episode for a much larger universe. I could easily see this as an episodic series on Netflix.

‘Prospect’ will be distributed by Gunpowder & Sky’s sci-fi label DUST.

It hits theaters in LA and NY THIS Friday, November 2nd, and lands nationwide on November 9th. 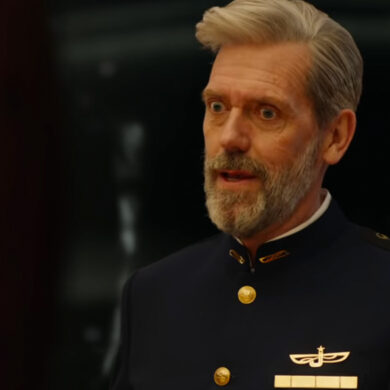