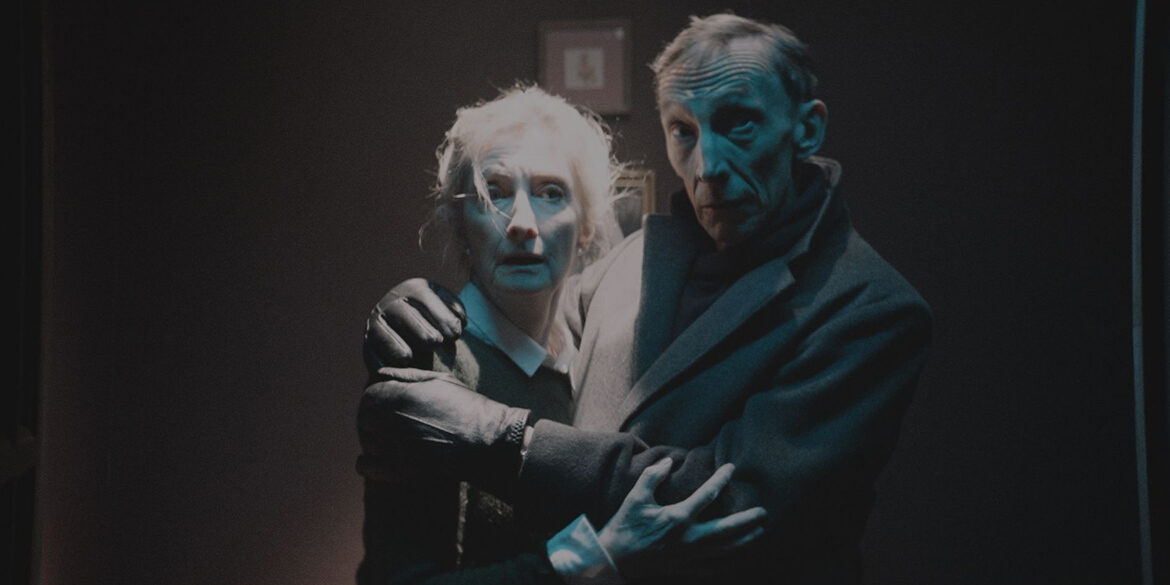 We love a pivot, and Justin G. Dyck’s made a director pivot for the horror history books with his new film, ‘Anything for Jackson.’ The film makes its U.S. Premiere at Nightstream and with it, the director conjures up a wholly original, wholly terrifying experience. A little disclaimer that the dark ‘Jackson’ wouldn’t exactly pair well with any other film on your Justin G. Dyck double feature.

Dyck’s body of work is almost entirely made up of light, feel-good fare with titles like ‘Christmas with a View’ and ‘Love in Harmony Valley,’ making this his first feature film that sits firmly in the horror genre. It’s exciting to watch a filmmaker jump so confidently into another realm. Maybe he’ll stay a while.

Like its director, ‘Anything for Jackson’ makes a bold impression when it does the unexpected. Before it gets to the scares, the film opens, just briefly, with the illusion of normalcy. Audrey and Henry Walsh (Sheila McCarthy and Julian Richings) putter around their home, sharing their usual morning banter — all is well, it seems. The couple then rush outside and return, forcing along a woman named Shannon (Konstantina Mantelos). Suddenly, we’re watching a kidnapping. Accomplished in a single wide shot, the eerie scene is a warning: if at any point we get too comfortable, dark and shocking turns will be waiting to shake us out of it.

We find out the “what” and the “why” of the kidnapping later, often through deftly dealt flashbacks. Audrey and Henry Walsh, we learn, are grieving grandparents who lost their grandchild, Jackson, in an accident. Audrey, in her pain, wants desperately to have their grandson back in their lives, no matter the cost. A weary Henry, following the lead of his benevolent love and Lady Macbeth figure, commits to her every wish. The pair begin attending meetings with their local Satanists. Through their studies, they find a way to conduct a “reverse exorcism” which would bring Jackson back to life. For the ritual to work, however, they need to put Jackson into a woman’s unborn child. Shannon was a perfect fit.

They tie Shannon up, having taken every possible precaution to avoid attention from the authorities.  The plan is to care for Shannon, conduct the ritual, then have Jackson again. The ritual goes wrong, however, causing the gates of hell to open up and flood their home with uninvited spirits. Dyck isn’t shy about searing those ghosts into your brain, either. He introduces them in thrilling spurts, smartly splicing them in with flashbacks to keep up the pace. He stretches out each hellish encounter until our absolute breaking point, in which we are practically begging for the camera to look away from the ghastly sight in front of us. (Let’s just say you’ll look at your dental floss a little differently tonight.)

The ghostly horror does occasionally make us forget the earthly horror Audrey and Henry have recently endured: the loss of their grandchild. Third-wheeling the reverse-exorcism and unleashed evil entities, Jackson settles into being the idea of a grandson, rather than a little boy the couple loved, or as the title dictates, would do “anything for.” Jackson is only a physical entity in flashes — he’s mostly a memory.

Though Jackson isn’t a character the viewer gets to know, Audrey and Henry’s grief over his death is the source of the film’s power. Beneath the terror of ‘Anything for Jackson,’ Dyck examines grief, and the ways in which it can eat at the mind. It arrives in waves, but always flows beneath the film’s surface.

Hoping to explain herself and their overpreparation for the kidnapping, Audrey tells Shannon, “Believe me when I say that we’ve thought of everything. No one has more time than a grieving family. No one.” For the couple, the kidnapping and ritual are dangerous acts of desperation. Shannon is just the undeserving party who is unexpectedly thrust into their emotional storm.

‘Anything for Jackson,’ directed by Justin G. Dyck and written by Keith Storm, had its U.S. premiere at Nightstream this weekend. It’s available for festival streaming through October 14th.

85
Nightstream: ‘Anything for Jackson’ is a Chilling Look at Grief and the Ghosts that Come with It