Nightstream: ‘Bloody Hell’ Gets Tied Up in Its Own Cleverness 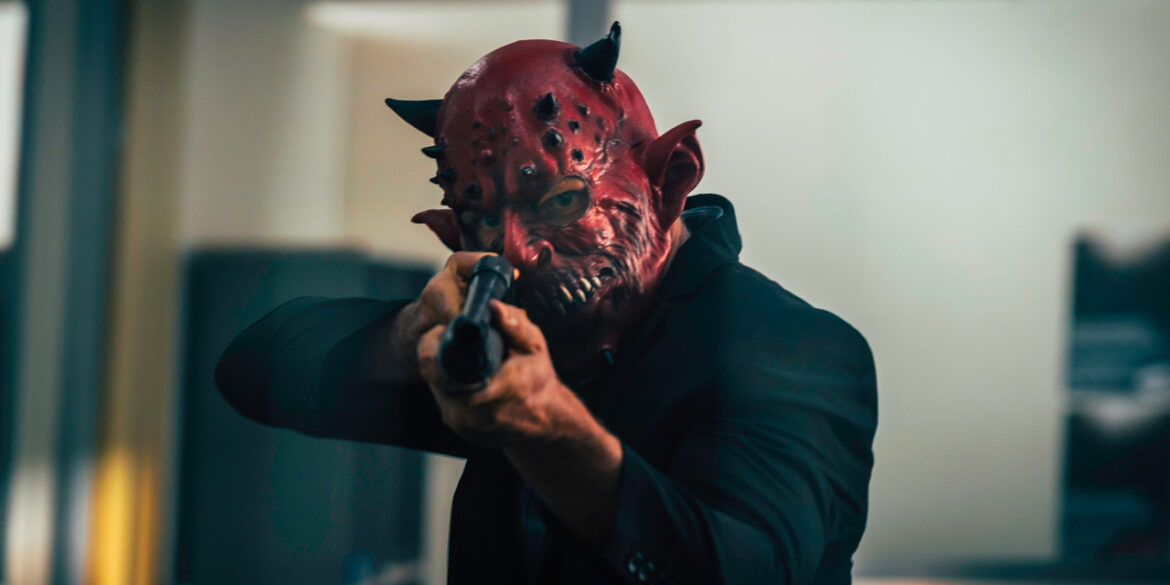 ‘Bloody Hell’ takes pleasure in the outlandish coincidence of its events. By the luck of a spitball, the bulk of its story takes place in Finland. Why Finland? Why not?

Making its North American premiere at Nightstream, director Alister Grierson’s genre mishmash of a film exudes a cheeky, damn-it-all attitude. But slick self-awareness doesn’t always amount to coherence. After all, if you hurtle spitballs in all directions, they very rarely land in the same place.

‘Bloody Hell’ begins its story proper not yet in Finland but in Boise, Idaho, where Rex (Ben O’Toole), finds himself caught in the middle of a bank robbery. Through frenzied gunfire, Rex takes down all of the masked bank robbers, prompting a sensational trial that puts him in prison for 8 years. This is only the start of Rex’s troubles.

While in prison, Rex launches the aforementioned spitball at a world map. It — and 2 more for good measure — lands on Finland, so it’s off to Helsinki he goes after his release from prison. Moments after landing in Helsinki, Rex is gassed by his driver. He wakes up in a basement tied up by his hands and missing a foot, the doings of a demented family. A constellation of unlikely events has led him to this grisly fate; now he must find a way out.

All too willing to help is Alia (Meg Fraser), the kindly daughter of the Finnish family of kidnappers. She hits Rex with the reason he’s dangling in their basement like a slab of meat: her oldest brother was born a flesh-eating beast, and Rex is his next meal. A macabre flashback of a hacked leg on a platter as Alia and family sit around the table Norman Rockwell-style completes the picture.

All of the kidnapping and cannibal business makes one wonder why we even needed to begin with a bank robbery. A robbery and 8 years in prison is certainly a long walk to get a guy to a dingy basement in Finland.

Of the messy bank incident, a friend of Rex’s says, “Some version of the story you’re the Dark Knight, in others you’re the Joker.” The world makes what they will of Rex as a man, but it seems that Rex himself doesn’t know who he is. The (bloody) hell if we do either. Here’s what we do know: he’s a slick guy who was flirting with a bank teller just before the robbery. They may have been seeing each other, or maybe Rex was just a bank regular with a crush? Either way, their connection isn’t made clear.

We also know Rex’s violent outburst at the bank may or may not be linked to his pre-existing PTSD. (It’s casually dropped in about 80 minutes through that Rex is a military veteran who served in Afghanistan.) Part of his psychosis is his ongoing conversations with his inner self, manifesting as a hallucinatory double. This second Rex plays a prominent role in the film. He’s both a voice of reason and the little devil on Rex’s shoulder.

On the one hand, it’s nice to get two times the Ben O’Toole performance. He’s a pro at dishing out the quick-witted black humor of Robert Benjamin’s script. On the other, the two Rexes further muddy the plot which, if you’re keeping count, already involves a robbery-turned-massacre, a lengthy prison sentence, a random kidnapping, a severed foot, and a hungry cannibal.

It might have been grounding to build a deeper foundation in this relationship between Rex and his other self. They have some entertaining, cleverly-constructed interplay, and the Jekyll and Hyde of it all gives us a stronger investment in who Rex is, and who he’ll choose to be if he survives. In a way, he’s fighting himself for most of the film, not the family. Instead, the hallucination disappears without much trouble, instantly deflating any weight its inclusion may have held.

Clash as its components mostly do, ‘Bloody Hell’ encourages us to not ask questions. The film and its characters are fully aware that none of this quite makes sense — this specific family, who just happens to have a cannibalistic son, specifically targeted Rex, who happens to have an unusually troubled past. “It doesn’t matter how, doesn’t matter why — you are here,” Rex tells himself. Unfortunately for him, pointing out the lack of logic doesn’t make us forget that logic exists.

Check out the new poster and trailer below.  The Horror Collective will release ‘Bloody Hell’ on January 14, 2021.

58
Nightstream: ‘Bloody Hell’ Gets Tied Up in Its Own Cleverness