The way a movie is presented, and subsequently marketed, to a potential audience has become a business unto itself. My personal dislike of trailers aside, there is often a disconnect between what a movie is marketed as and what the actual running time of the film offers. So while You’re Next, the oft-delayed film by director Adam Wingard and writer Simon Barrett, is being marketed to you as a straight, paint-by-numbers home invasion film, be assured that it is most definitely not.

You’re Next does begin in that very familiar, formulaic home invasion way. From that first scare to the overtly, and stiff, expository dialogue, the first few sequences of the film are so cookie cutter it is a little off-putting. Based on the marketing and pre-release imagery we are all expecting a standard home invasion film, but the opening moments are so standard it is nearly baffling. Almost as if we are watching a composite of past films of this type instead of original material. But don’t worry, a few moments later Wingard and Barrett show their narrative hand and reveal what kind of film this really is. And when that happens You’re Next moves beyond being simply entertaining and approaches the arena of inspired storytelling.

I hesitate to reveal what type of film You’re Next becomes, for the simple reason that the reveal was a complete surprise, and a pleasant one at that, for me as an audience member. To reveal that twist would be to rob the viewer of one of the more effective components of You’re Next. So, I advise you to stop reading this review right now and just go see the film. Come back to the rest afterwards. Trust me.

Okay, you back? I know right? I told you. The fact that You’re Next takes a pretty sharp and calculated turn into parody is what allows the film to be such a success within the well explored world of home invasion films. It becomes less “The Strangers” and more “Rules of the Game”, involving itself in the satirization of familial and societal relationships, all while lovingly poking at the sub-genre’s formulaic conceits.

That said, this is not a straight send-up type of parody. It is rare for a film to play it straight enough for it to work on its own terms, all while taking time to point to the more ridiculous moments of parody and wink. You’re Next is that rare film that can simultaneously point to why home invasion films are so ridiculous and why they are, at the same time, amazing. This kind of parody can only be accomplished by a group of people who love the genre and know it well. Think of it as a good hearted cinematic roast of an old friend.

Besides the successful blending of sight gags, hilarious dialogue, and some especially bloody slapstick, the other element of the film that allows it to stand out is the incredible cast. Filled with an all-star assembly of indie horror, from AJ Bowen, Joe Swanberg, Barbara Crampton, and even Ti West, You’re Next plays like a really good dinner party between incredibly talented friends. Everyone is having a good time here, and it translates to the movie viewing experience. The major stand-out though, is our eventual heroine Erin, played here by Sharni Vinson. While Vinson is a relative new comer, especially considering the pedigree of some of her co-stars, her portrayal and the manner in which she revels in it really allows the film to stay fun, even through some rather dark moments. With her ability to pull off that kind of performance, all while reenacting some pretty obvious nods to The Texas Chainsaw Massacre and, yes, Home Alone, You’re Next never bogs down into its own jokiness. Her full commitment to everything happening on screen allows us all to invest in it, despite its general ridiculousness.

So, no, You’re Next is not the film you have been told it is. Luckily, though, it ends up being a far more interesting one. With the film’s understanding, and loving lampooning, of these types of movies, the film rises above simple home invasion thriller and becomes something far more entertaining. 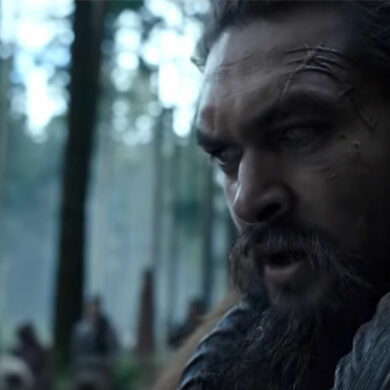