SXSW 18: ‘Don’t Leave Home’ is a Weak Entry in the Horror Genre

Michael Tullyis in the long line of proud Austin natives who have become successful filmmakers. He has joined the likes of Richard Linklater, Robert Rodriguez & David Lowery. While his films are smaller and he hasn’t enjoyed the commercial success those directors have, he still has a passionate fan base who root for him to succeed. They were over the moon for his 2014 effort, ‘Ping Pong Summer’, a coming of age comedy set in the 1980’s. So far everyone seems to be enjoying his most newest film as well. ‘Don’t Leave Home’premiered last week at SXSW and stars Anna Margaret Hollymanin cerebral horror tale set in the Irish countryside.

The film begins in the 1980’s with a family commissioning a local priest, Alistair Burke, to paint a portrait of their daughter. When they receive the final product they are overjoyed, but that joy turns to utter despair in the next scene when their daughter seemingly vanishes into thin air. It’s suggested that the painting is connected to the disappearance and we find out that Burke goes into a kind of exile and gives up the cloth soon after this. In the current day, a sculptor (Hollyman) is prepping an exhibit. The theme is mysterious disappearances and one of her sculptures is a representation of priest’s painting. After receiving a call from priest’s caretaker (Helena Bereen), she travels to Ireland to meet Alistair Burke, played with an overwhelming sense of sorrow by Lalor Roddy.

Once she arrives in Ireland she begins to find her surroundings more than a little unusual. Interactions with everyone at Burke’s estate are unnatural. She is there ostensibly to sell her sculpture of the little girl and to do a new original work for Burke and his caretaker to sell to their wealthy friends. But once she settles in to her guest room, she begins passing out, experiencing night terrors & Burke himself warns her that something terrible is happening. The problem with ‘Don’t Leave Home‘ is none of this is that interesting when it’s happening.

The film has the problem that I tend to have with a lot of low budget horror films. Now they days they tend to go for more an “Art Horror” angle. Which can be amazing, Rosemary’s Baby is a true masterpiece. But so often today it feels like filmmakers have their last crazy ten minutes in mind, and don’t care too much for the first 75 that are supposed to draw us in. It leads to too many films that feel boring and inert. Which is how I would describe most of the plot of ‘Don’t Leave Home‘. I don’t want to come off too negative, because there are some thing I did enjoy and will discuss. But when the story leaves you completely uninterested no homage or performance aspect can turn it around.

The things that this film does have going for it are its three main actors. Hollyman, Bereen & Roddyare all doing their best and they are actually quite good in some scenes. I just unfortunately stopped caring about the story they were in. The film’s score is also quite interesting, it evoked a feeling of an early Danny Elfman score which in turn evoked an early Tim Burton feeling while watching the film at times. Tully, who also serves as screenwriter, also does his part to evoke Burton feelings from you. There’s a good use of humor in the film, not from traditional jokes exactly, more from oddities of the characters involved. That does add a sense of life that’s missing from a lot of modern “Art Horror” films and I commend it for that, it just never elevated it beyond its sluggish story.

Michael Tully gave a Q&A after the film and was personable and provided some good insight into the film. He strikes me as a good representative for independent filmmaking and definitely has talent as a director. The imagery of ‘Don’t Leave Home‘ suggest someone who can tell interesting visual stories. Unfortunately, I think film ultimately suffers from horror tropes that really grade on me, and a script that feels incredibly lacking and without focus. 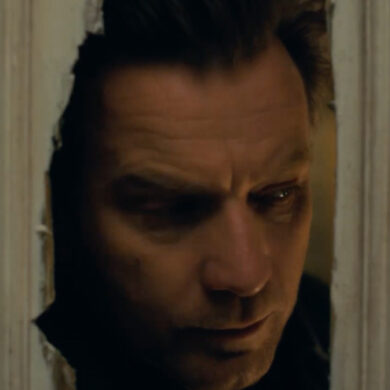