Panic Fest: ‘The Wind’ Delivers As An Unsettling Horror Western

Any experienced player of the Oregon Trail video game knows the terrors of the American frontier. Causes of death can include dysentery, snake bites, even broken limbs. A mismanaged trip across a river can drown an entire party. The Wind, a slow burn horror film from director Emma Tammi, utilizes the old West in a similar fashion. Prairie grass might not be as spine-chilling as an ancient forest, but isolation can breed the same senses of unease and hysteria.

Lizzy Macklin (Caitlin Gerard) lives a cozy life in a cozy log cabin with her husband, Isaac (Ashley Zukerman). Like others in the 1800s, they moved west for a new life on the untamed land. Isaac and Lizzy form relationships with their neighbors and try to give birth like any young couple. But their new environment comes with challenges, both natural and supernatural.

Tammi pieces the story together by shifting between two timelines. One shows Lizzy alone and distressed clutching a shotgun for survival, the other slowly explains how she arrived at that state. Gerard’s dynamic performance allows each timeline to be distinct. The patient directing lingers on her piercing glares into the wide open prairie.

The actual wind of The Wind, through expert sound design, delivers as a constant threat. It’s invisible, intangible, and a perfect symbol of Midwestern climate. The film uses it for everything from busting down doors to snuffing out candle flames. Most importantly, it’s used as a warning for the supernatural force haunting the area.

The film is more modern and rough around the edges than its closest comparison: 2015’s The Witch. Tammi embraces well-earned jump scares, and her characters do not speak in abrasive Old English. The Wind leans into the supernatural special effects in the latter half of the film, nearly betraying the tone and pacing that were set from the opening image. Religious ideas are scattered throughout the movie, but they have little connection with the core themes of the story. The story structure lends itself to plot twists, which benefits what would have been a simple, predictable film.

The Wind is a horror western, a rare genre mix. Horror fans can appreciate the film’s jump scares, and western fans can appreciate the brief homage to the famous doorway scene from 1956’s The Searchers. Both genres cover similar themes of grief and isolation, which are prevalent in The Wind. The movie is an examination of how someone in grief can lose their sense of reality when left to their own devices.

The unique and successful genre blend makes for an enjoyable watch. Gerard’s rugged, wide-ranging performance carries the film. Lizzy’s descent into paranoia shows that there is more to worry about than snake bites and dysentery. 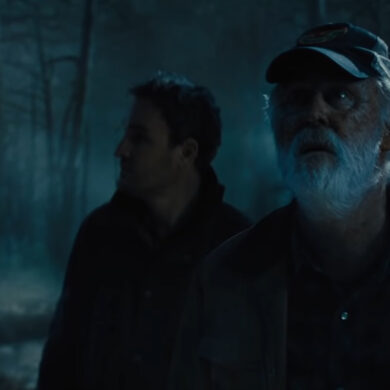