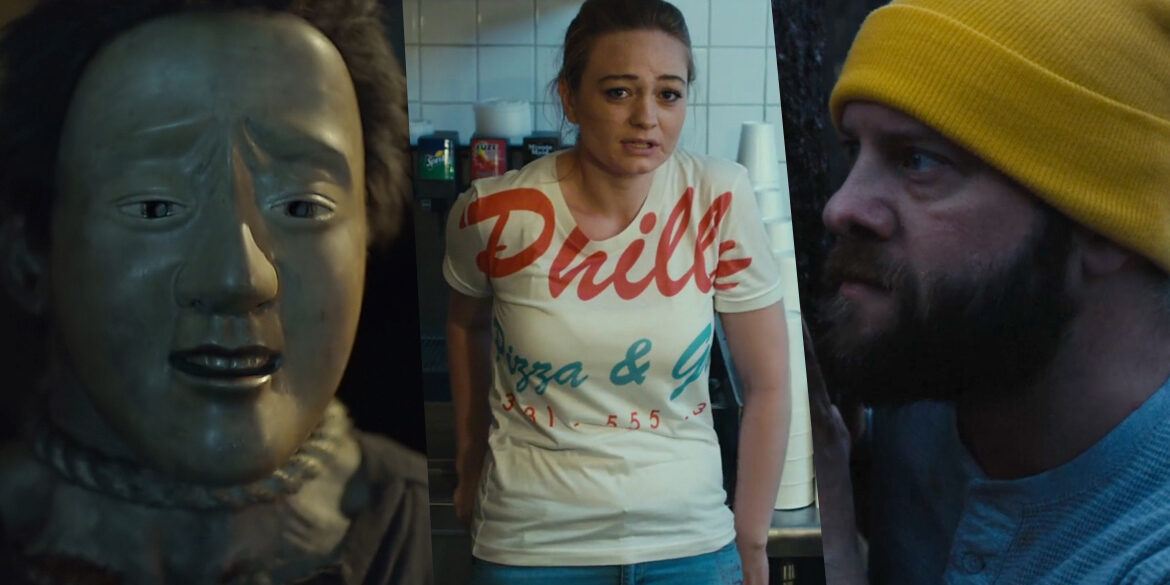 Short films can often get overlooked or lost in the huge amount of content that is available for genre fans – but they can sometimes be the most rewarding. They can act as calling cards for up and coming directors and we have seen our fair share of incredible short films pass through our film festival at Panic Fest. Directors like Gigi Guerrero, Fede Alverez and Neill Blomkamp are just a handful of directors that used shorts to propel their careers.

With the rise of platforms like Gunpowder & Sky’s ALTER and DUST as well as Shudder these shorts can find a good home and reach an audience now more than ever.

After watching more than 200+ short films this year have compiled my favorite shorts of 2019 in no particular order.

THE FALL
BBC Films and A24 teamed up for an unnerving short film from director Jonathan Glazer that dropped online around Thanksgiving. Simplistic in it’s approach, it takes place in a forest with a group of people in creepy masks and a tribal mob mentality that is dead set on killing a man. Each mask was uniquely crafted and portrays expressions of fear frozen in time. With no dialogue and only in-audible sounds it feels timeless within the setting and the execution.

CONSPIRACY CRUISE
Director Brad Abrahams love for the weird and esoteric fueled his new short film ‘Conspiracy Cruise.’ His previous projects include ‘Love and Saucers’, ‘Swan Song of the Skunk Ape’ and ‘Cryptozoologist.’ All fall in line with subject matters I love to devour.

The film feels like an episode of ‘Last Podcast on the Left’ brought to life and captures the absurdity of conspiracies and frames them perfectly.

SEE YOU ON THE OTHER SIDE
The Summers Brothers’ (Robert and Russell Summers) sci-fi thriller takes on time travel in a clever way with callbacks that work very well even within its running time that only clocking in just over 10 minutes. Through a series of dreams and visions, a woman begins to suspect reality has been altered by mysterious forces. Her future is pieced together by her own self through a series of time loops with a very satisfying payoff. If you are going to watch this short, I suggest you bring some tacos with you. 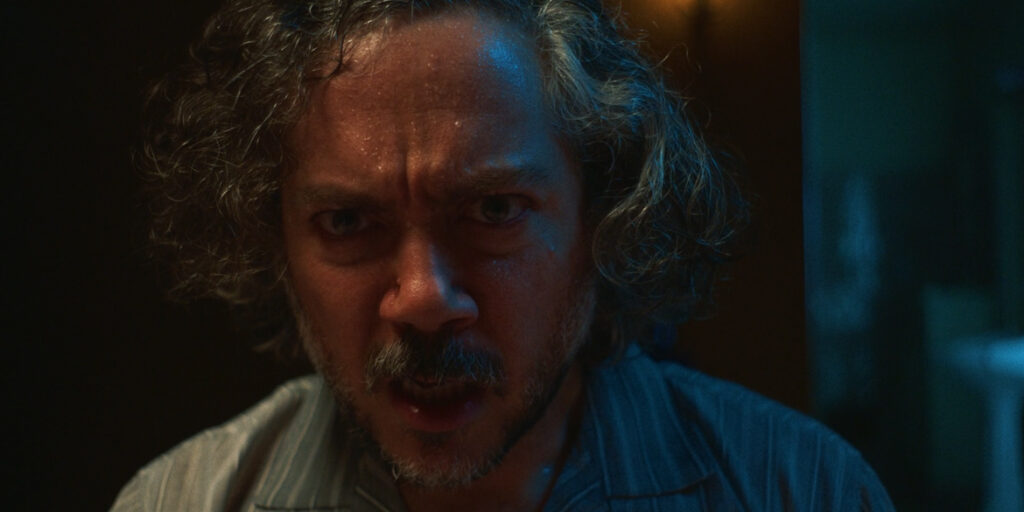 Director and writer Charles Pieper has established a unique style that is recognizable and delightful even when the subject matter digs a dark hole. ‘Malacostraca’ plays out like a tale from Edgar Allan Poe. The short explores the psyche of a writer trying to finish his story while dealing with the new found responsibilities of becoming a father – and how his mind starts to crack.

BUFFALO & TROUT
Buffalo and Trout are two female drugs addicts who are looking for their next fix – but the next job they have to pull off to get it could be a decision of life or death. However, not for them but for a child. The heist takes place at a white supremacist safe house but they are soon are faced with a decision; take the cash or save a young girl’s life. Director Presley Paras brings a high-end aesthetic to Buffalo and Trout, filled with drug fueled colors that are busting off the screen.

HOW TO BE ALONE

This dark and wickedly fun short film ‘How to Be Alone’ stars Maika Monroe (The Guest, It Follows) as a woman who’s deepest fears seem to manifest physically when her husband, played by Joe Keery (Stranger Things), leaves for the night shift.

‘How To Be Alone’ is the first film from writer/director Kate Trefry who is a writer on the ‘Stranger Things’ series. You can definitely tell there is some ‘Stranger Things’ influence in the short if it were adapted to modern times as an experimental short.

The short is visually fantastic and is enhanced by a beautiful color pallet. Couple that with the apprehension of never knowing what is on the cusp of reality and fantastical. It explores how the untamed mind wonders during boredom and loneliness.

CHICKENS
Social horror has taken a huge step forward the last couple of years and the short ‘Chickens’ brings social justice to the forefront. Hailing from the team of ALT Horror, director Bryian Keith Montgomery Jr. crafted an intense short clocking in at just over 12 minutes and builds with tension with each passing minute. Revolving around two racist cops that try to cover up killing an unarmed black teen it not only has a social narrative that feels all to common but has a very satisfying ending that brings new meaning to “social justice.”

Director Ruairi Robinson’s short ‘Corporate Monster’, was a proof of concept film that was written by Robinson & Eoin Rogers. The sci-fi horror film, with VFX by Robinson’s The Kaiju Meat Company, stars Kett Turton and Jenna Coleman as a couple confronted with the reality that either he is just dangerously unstable, or there are in fact monsters all around us.

‘Corporate Monster’ focuses on a dangerously unstable man as his life spirals out of control when the prescription pills he takes start to have a side effect: they allow him to see the parasitic beings that have long been puppeteering our world from the shadows. The rich and powerful are not even human, and they are feeding on us. He sets about trying to save his girlfriend from them, but it’s just as possible they are just a side effect of the pills, a hallucination. Is he a savior or a monster himself?

THE HIDEBEHIND
Parker Finn’s ‘The Hidebehind’ was one of my favorite short films coming out of Panic Fest 2019. It has one setting, one actor (sorta) and very little dialogue – yet the film still finds ways to creep you out. Forest settings can always become creepy because being lost in a vast sea of tress and not knowing where you are will also be unnerving. Sprinkle in the fact that our lone backpacker encounters a peculiar stranger and now we have the recipe for something creepy. If you liked Crypt TV’s ‘The Birch’ then you should enjoy ‘The Hidebehind’ which has been recently picked up by ALTER. It almost feels like the two films could live in the same universe. Maybe some ritual tribe from ‘The Fall’ cast a spell on the people they throw down a well and when they come back to the forest they become these….things. Check it out for yourself below.

PINKI
Nostalgia continues to win us over in interesting ways and the short ‘Pinki’ did just that with its unique approach. It is a fringe selection for me because while it was part of our Panic Fest 2019 programming but it was submitted in 2018. However I still do not believe it has received proper distribution as of yet. Which is a real shame because I loved everything about it. ‘Pinki’ plays on sentimental tones and gives us the decision of letting go of the past, or have it consume us. Using a robot junk monster as a metaphor for holding on to possessions to long it brings to life inanimate objects and has them battle against not only each other, but our feelings toward them as well. The story was told in such a unique and fun way. More people need to see it and bust our their Walkman’s.

So there you have it. Some of my favorite short films from 2019. What were some of your favorites? Tell us in the comment section below or on Twitter using #DRCShorts2019. 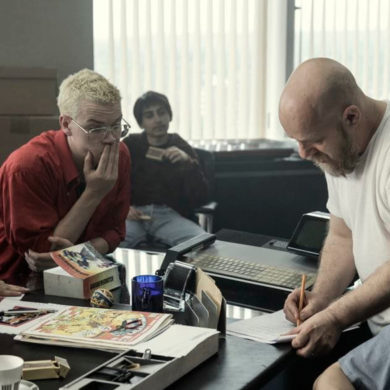