It doesn’t take too long into Thomas Aske Berg and Fredrik Waldeland’s new film,Vidar the Vampire, to think that one of the two, if not both, have some serious issues with organized religion. My immediate disclaimer for anyone interested in this film is that there are quite a few moments that will offend some of the audience. Whether they are to be taken seriously or in a dark comedic tone is up to the viewer for interpretation. That said, is the rest of this new take on the age-old vampire theme worth the trip?

Vidar the Vampireis clearly Thomas Aske Berg’s film as he not only directs, writes and produces the effort, but also is the lead role of Vidar, a 33 year-old (no coincidence on that age for those out there with religious education) farmer who is desperate for a change in his life. As our film opens, Vidar is still a young teenager who hates his life. He wakes up early as his mother sleeps, takes care of all the animals on the farm and then goes to sleep…day in and day out. He sneaks a peak at a Playboy in the chicken coop as he dreams of a life far away from the farm. He is tricked into thinking a female “friend” of his wants to go steady before having it revealed she was only teasing him in hopes he would break down and cry. He is also clearly henpecked by his mother with no apparent out of his current situation.

Flash forward to the present where he’s now 33 years old, still sleeping in his same bedroom in his mother’s house and still sneaking a peak at his Playboy. But there may be hope as we are introduced to Jesus (Brigt Skrettingland), a vampire who uses rather questionable methods to turn Vidar into a creature of the night (pretty sure what we see is a first for vampire films), only to hold sway over him like a house pet. Vidar soon struggles with his new life and is looking for a way out. Along the way, we’re led down a dark acid trip of bizarre occurrences, all with religious undertones and the occasional shock moment, one of which crosses a personal line for me. That moment, and you’ll know it when you see it, might be funny to some but it is excessively gross and seems to be an amateurish way to shock your audience. It’s clearly an example of weak writing as far as I’m concerned.

There are humorous moments, from Vidar’s resurrection to his reunion with his mother, to the random scenes with his therapist. Vidar tells his therapist that the tale is a hard one to understand, which it definitely is. I did laugh several times but most of those moments came early on in the film. The movie comes across as rather bleak, which may have to do with setting the film in Norway. I also liked some of the elements of the story as it was not a conventional vampire tale, which is actually a good thing. However, I grew weary of the shock moments and the constant religious humor which eventually become cliché.

Vidar the Vampire is certainly not to be taken seriously, especially when characters have names like “whore of Babylon” and the previously mentioned “Jesus.” That said, I could see that there was enough here that could have worked better in much smaller doses. I often wonder why filmmakers feel the need to stretch out a 20-minute idea to 80 or 90 minutes. Here is a prime example of a film that should have been either a short or part of an anthology. There just wasn’t enough of a story to truly fill out an entire movie.

I’m curious to see what Thomas Aske Berg does next as his performance was interesting at times. However, I fear this may be a one and done effort from someone who made a film to work through their personal religious issues. Watch Vidar the Vampire at your own risk, but only if you are not easily offended. However, I’m not convinced the journey is worth the time. 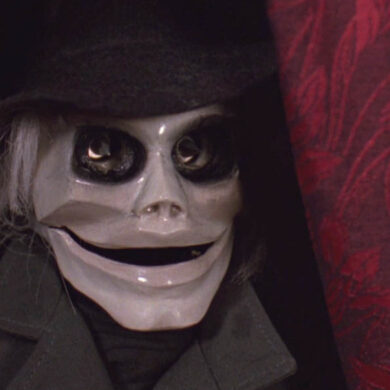