REVIEW: ‘Raven’s Hollow’ Had Potential to Deliver a Creepy Gothic Tale But Disappoints in the Delivery 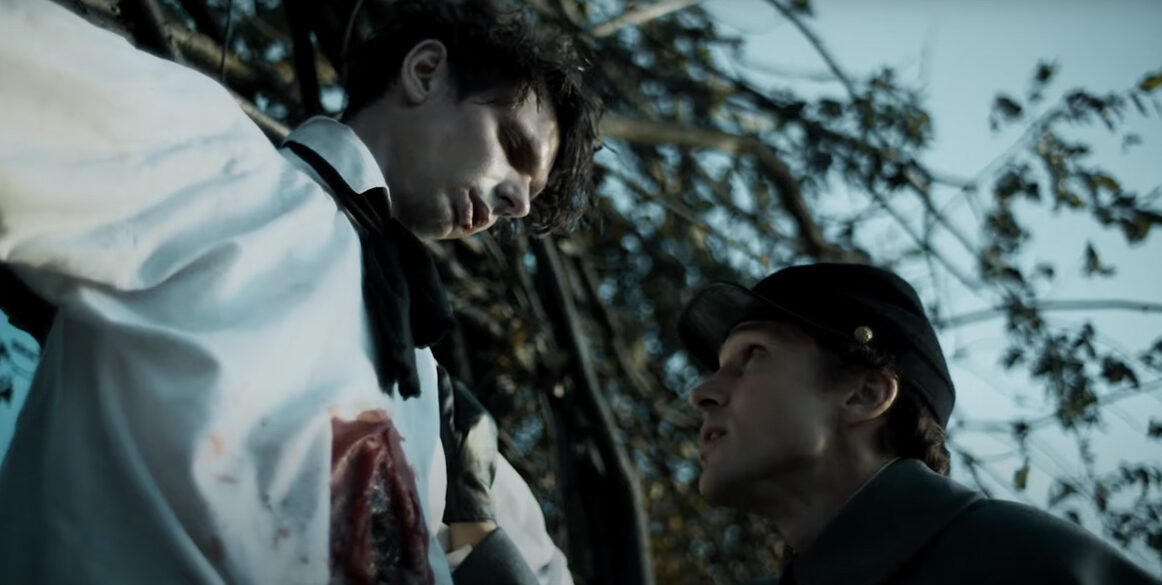 It begins with a tunnel-view scene of a young girl emerging from the mist, the forest surrounding her, a raven screeching to let the viewer know the next ninety minutes and change will be laced with Edgar Allan Poe references.

Moments later, CGI leaves follow the girl into an eighteen-hundreds cabin. As the camera spans the interior, and then returns to the girl, we watch as the CGI leaves force themselves down the girl’s (who is now floating in the air) throat.

‘Raven’s Hollow’ is the story of four military cadets, led by Edgar Allan Poe, who, while out on field training, discover the eviscerated body of a man whose last word is “raven.” Naturally, Poe believes this refers to the place from which the man is from – the weird, depressing, creepy town of Raven’s Hollow, where everyone looks like they bathe in ash and have summer residences in ‘Silent Hill.’

The four cadets deliver the body to the citizens of Raven’s Hollow and decide to stay the night for warm beds and hot meals (I think I’ll vacation in Haddonfield on Halloween night, or maybe pitch a tent in Camp Crystal Lake). From there, the mystery ensues. People are being murdered in simple, brutal, visceral ways, and the cadets refuse to believe it is the town legend committing the murders. No, it cannot be “The Raven”; the implied slave (it is never explicitly stated he is a slave, and the viewer will find out he is much more), Usher (a clever Poe reference), makes much more sense.

‘Raven’s Hollow’ contains many positives. The set pieces are tremendous. The movie submerges the viewer in eighteen-hundreds rural eccentricity. The dialogue is concise and very much to the point, moving the story along pleasantly. The mystery is intriguing and engaging until it is not.

The Edgar Allan Poe references are numerous and astute. The creature is referred to as “The Raven,” the aforementioned character named “Usher,” the supposed murder weapon is an ax (a subtle nod to “The Black Cat”), Edgar holds the beating heart of his dead friend in his hands (the “Tell-Tale Heart”), and one of the main characters tells the story of her sister, Lenore (another “The Raven” reference), being taken by the creature of the film.

For all the fun references and eerie atmospheres, there are negatives. The acting is subpar. Although the dialogue is succinct, a little emotion would go a long way in its delivery. The actors are reading a script instead of bringing it to life. Murders are happening all around them, and the tone of the actors’ voices does not really convey a sense of urgency. There is no hint of inflection. It ranges from uninspired to robotic.

William Moseley portrays a Humphrey Bogart-esque Poe; he is too good looking and too smooth for the role. Poe was never a leading man. He was a depressed, poetic, tortured, complex, drunk, stoned, helpless romantic. It is good to see they did not pigeon-hole Poe into a brooding, creepy pervert, but instead they pigeon-holed him into a poor man’s Tom Cruise transplanted onto a haunted period piece. Mr. Moseley would do great in the next Top Gun, but this is not that movie.

The creature, when finally revealed, is kind of ridiculous. It is not creepy nor grotesque, but rather something out of Jurassic Park gothic edition. It does not help the reveal when Poe is reciting his poem, “The Raven”, (which he has not written yet?) in a cringe-inducing manner as the menacing creature stands next to a grave site. Yes, when my life is threatened and a mythical creature stands before me, I begin to recite poetry as a coping mechanism. It all feels forced.

The last half hour of the movie descends into something incomprehensible. Poe turns from a stoic leading man to a rambling romantic, but the shift is not earned nor convincing. Others begin to kill each other and themselves for reasons that are beyond the viewer. And we get a reason as to why The Raven continues to haunt Poe into his legendary poem. The semblance of a well-done payoff is there, but it seems Christopher Hatton (writer and director) lost the plot somewhere along the way.

Edgar Allan Poe was a genius who became legendary long after his death. Countless stories have attempted to add to his aura and capitalize on the mystery surrounding him. Raven’s Hollow falls short of that mark, falling into the annals of decent but overall forgettable movies. I say to it, “Take thy form from off my door!” And it shall be remembered – Nevermore. 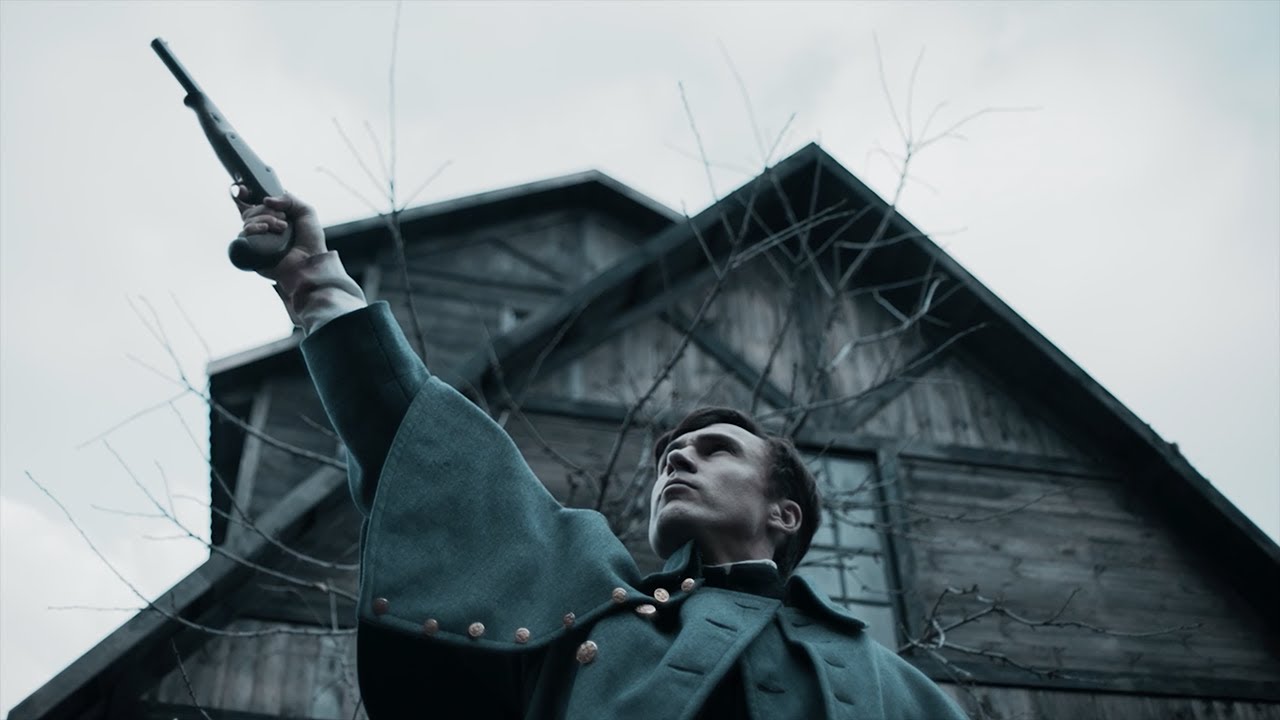 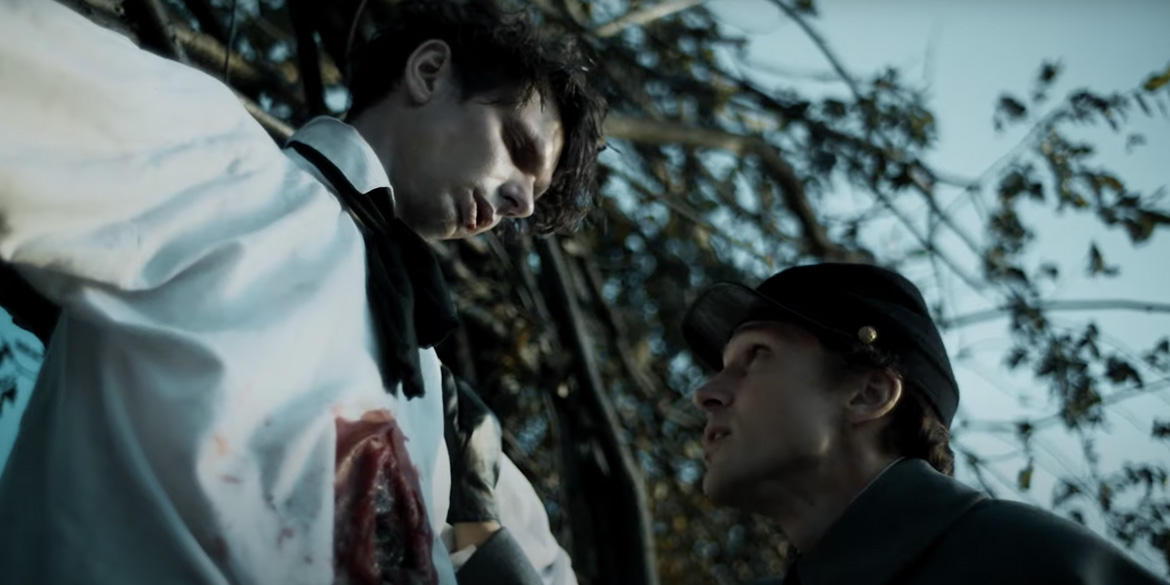 REVIEW: ‘Raven’s Hollow’ Had Potential to Deliver a Creepy Gothic Tale But Disappoints in the Delivery
65