There’s times where it’s hard to tell if Nicolas Cage is actually acting, drunk or is some hypnotized state wandering through life. Between Worlds feels like a combination of the three, which strangely works with the discombobulated status of the film on a whole.

Joe (Nicolas Cage) is a lonely truck driver, coming across just as sad as the tattered hat he wears. Wanting to seemingly be a good guy, he rescues Julie (Franka Potente), as she’s being choked out in the mensroom stall. Turns out, her life wasn’t in danger, but rather was in the midsts of trying to rescue her daughter, who’s in a coma at the local hospital. A nurse informed Julie that it’s possible to steer souls that have left their body, back to their original home, but doing so means crossing into that realm themselves. While that vessel is unoccupied, other souls can effectively “rent” out the space. It’s an interesting idea that best gets summed up in one of the film’s truly unique line deliveries:  “So a ghost took over Billie’s body like some kind of hermit crab?” The ghost in question is, surprise surprise, Joe’s deceased wife, Mary.

Getting to the actual reveal that her souls does reside in a body that isn’t hers takes more than half the film. Waiting that long causes the film to meander a bit, exploring the burgeoning relationship between Julie and Joe. Only problem is that it never feels too compelling.

A weirdly catchy but discordant score pulses in the background of every scene. At times it’s almost distracting, with a majority of the tunes resembling something Twin Peaksadjacent. It would work, if Between Worlds was invested in going full bore in that direction, rather than meandering around.

Part of the issue with Between Worlds comes down to confusing contrast of tones. Writer and director Maria Pulera seems to be making a film for everyone and no one simultaneously. Humor punctuates several scenes and crops up at the weirdest moments. It’s hard to discern if this is completely by design or if. tried to add it after the fact to keep audience’s guessing. The effect doesn’t totally adding up, merely adding a weird quality to a picture in search of an identity. Well, one outside the “Nicholas Cage goes nuts here” element that the producers are practically writing in the sky. Yet, Cage himself is in so many films a year, of inconsistent variety, that it being your biggest selling point is to invite derision or at least disappointment.

Between Worlds does set up an interesting proposal. It posits that a Nicholas Cage performance is predicated on the level of focus a director can place upon him. Left to his own devices Cage is sure to go off book or deliver a character that doesn’t match whatever the films needs as a whole. As sad and pathetic as Joe may be, he acts in ways that not only aren’t exactly human, but disrupt the natural progress of the story.  Sometimes he simultaneously reads from a book called “Memoirs by Nicolas Cage”. That’s what kind of film this is. By devoting so much time to him, Potente gets lost in the mix as a result. She tries to will the narrative forward, to no avail. It’s a friviouls endeavor that even includes a character shutting down the logical thrust to a third act. Instead, what follows occurs without much rhyme or reason. Trying to be weird for weird’s sake.

There’s sure to those who sign up to see Between Worlds simply because of Cage’s involvement. He is the film’s unhinged highlight, but it shows what if you aren’t able to reign him in, everything surrounding suffers in the process. The whole thing ends with a few dead bodies, a blubbering disoriented Cage & an individual nonchalantly immolating themself. You know it’s not a good sign when a film ends on a half-hearted shrug. This one can barely raise it’s arms to make the gesture. 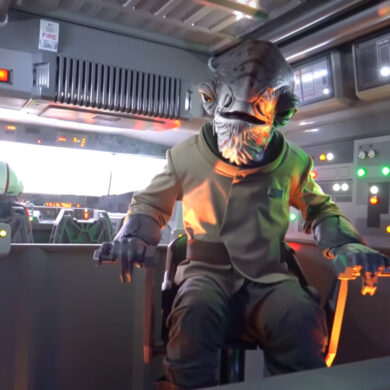 Enter the Mission Room of the ‘Star Wars: Rise of the Resistance’ Ride