Both 20th Century Fox and the movie going public have been trying to answer the same question for roughly 20 years: “what do people want from a Predator movie?” Seems like there should be a simple answer. Yet the last 3 attempts (Predators, AvP, AvP: Requiem) have failed to hone in on it exactly. Actually, they mostly covered what people “don’t want” to see in movie. So, it comes as no surprise that main driving force behind The Predator is one of the actors featured in the original: Shane Black. In the last decade alone, Black has erupted as director who’s pictures (The Nice Guys, Kiss Kiss Bang Bang) are as unique as the words he fills them with. Which may be why, in an interesting development, this is actually his weakest film to date.

You know exactly what kind of film you’re watching about 2 seconds into The Predator. Two spaceships engage in battle. One sporting the classic Predator look most fans are familiar with, sips a tear in the fabric of space. Hurtling through to the other side, the ships gets caught in the earth’s atmosphere and hurtles towards the ground as the title rips across the screen. It evokes something right out of the 80’s and it’s not the only time that feeling crops up.

Shortly after crash landing, the stranded Predator crosses paths with Army Ranger Quinn McKenna (Boyd Holbrook) and his unit. He makes quick work of the other soldiers, but McKenna is able to just barely escape, with a few pieces of the alien’s gear. Being  forward thinking, McKenna sends the evidence to a safe place. That’s a good idea, since both the army, as well as a secret government unit, headed by a scene-stealing Sterling K. Brown, are hot on his trail. Unfortunately, it ends up at the house of his estranged wife and into the hands of his on-the-spectrum son, Rory (Jacob Tremblay).

Brown’s group, it turns out, arrived so quickly on the scene, because they’ve been tracking Predator activity regularly. Since 1987. They enlist the assistance of  a biologist (Olivia Munn) to study the creature, due to a some aptitude algorithm that glossed over. The sort of development the film continually stumbles over. Their research is cut short as a Super Predator (or Apex Predator) breaks into the secret facility, in search of cargo the other Predator stole. Which can only be found, you guessed it, by gathering the gear now in little Rory’s possession. Just typing that out is exhausting.

Meanwhile, McKenna gets tossed in with a bus full of self-described “loonies”, potentially hoping his alien encounter can be chalked up to a break from reality. It’s here Black finds his footing, creating a menagerie of stock characters for which the audience can connect with. Or at least laugh at. Coyle (Keegan-Michael Key) tells an endless stream of ribald jokes. Nettles (Augusto Aguilera) thinks everything is a sign of the end times. Baxley (Thomas Jane) has tourettes and everything that cinematically goes along with that. Lynch (Alfie Allen) is just plain crazy. The most sensible among them is their de factor leader, Nebraska (Trevante Rhodes) and he once tried to put a bullet in his head.

Three concurrent story lines end up being a bit too much for The Predator to bare. Black wants to cram as much information into each scene. Usually this means the characters simply end up yelling at one another. With the loonies, it has a natural feel too it. Not so much when Brown crosses anyone’s path. Popping Nicorette like he’s trying to get the most out of a lifetime supply one moment. Threatening everyone’s lives the next. Munn, by comparison, ends ends up fighting for attention and respect, regardless of which group she’s with. Any time she approaches a badass moment, the film has someone else steal it or makes her a klutz.

For anyone who’s ever wondered what a Shane Black commercial movie looks like, The Predator is it. Most expected something along these lines when he made Iron Man Three. Instead he bucked the trend, both playing within Marvel’s sandbox and making a feature that times flew in the face of formulaic expectations. By comparison The Predator feels like something of a throwback. That’s no surprise coming from that decade’s stalwarts and former roomates Shane Black and Fred Dekk A film simultaneously tapping into the machismo of the 80’s, with the verve of a modern blockbuster. It’s tonal whiplash of the highest extreme, seeping into every aspect of the production. For each laugh, there’s a questionable joke that seems out dated.

The strangest thing about The Predator, is just how much fun it threatens to be, while up on-screen. The banter between characters crackles with Black’s trademark wit. Action is almost relentless, in the different ways it goes about letting blood spatter all over the place. Because of that, it’s hard to count how many set pieces there really are. Over time they all bleed together. Once they’re over, there’s a hollowness left. Like a Chinese meal from the food court. At first you marvel at how enjoyable the thing before you is, without questioning why it’s satisfying. Moments later, the feeling subsides. In The Predator‘s case you might find yourself asking “did I really like that?” as the credits roll. Not in some philosophical quandary, but in the sense that, while you may have laughed and cheered at things on-screen, you’re not sure what it all adds up to.

There’s an argument to be made during The Predator, to simply “shut up” and enjoy what’s on screen. Those able to ignore the seams, are in for a great time. The bloodshed flows freely. The body count almost astronomical. Quips are almost equally as frequent. Yet it isn’t that hard to also feel short changed. Overall the film is a mess. An enjoyable, confounding, maddening mess, that fits in perfectly with most current blockbusters. In the midst of all this insanity comes an ending that flies in the face of convention. While setting up a sequel that has the potential to be far more fun than The Predator possibly deserves. Maybe better do days lie ahead. 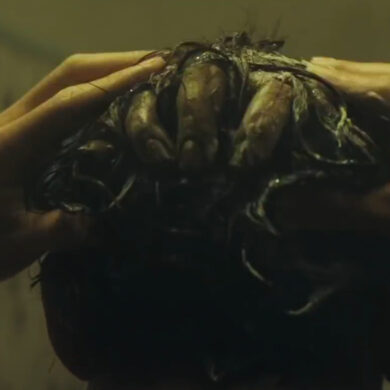