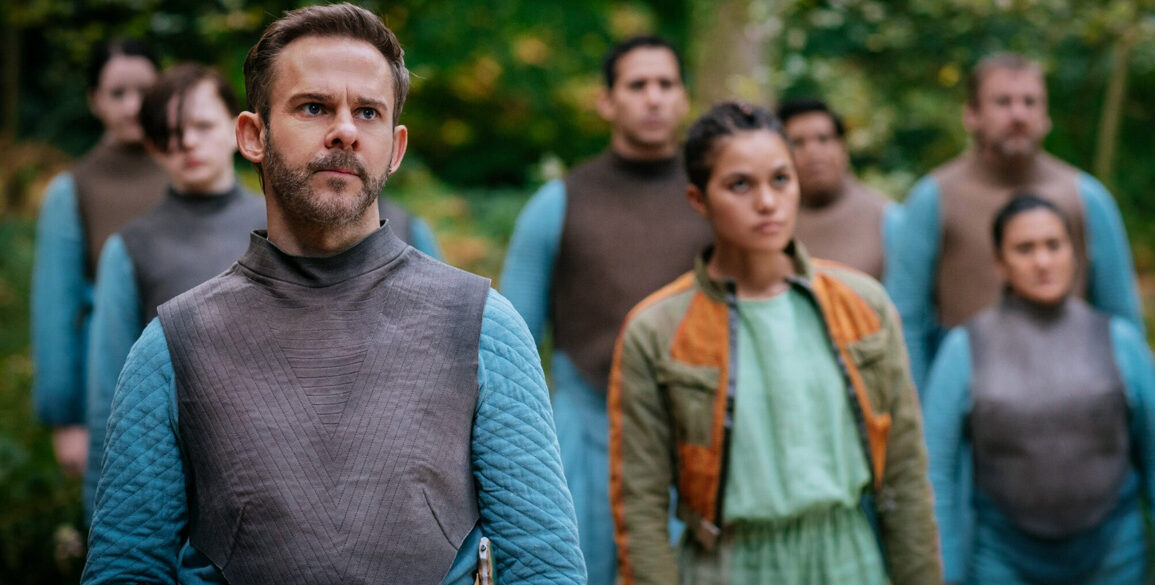 Set 180 years in the future, Moonhaven follows the journey of a lunar cargo pilot and smuggler, Bella Sway. In hopes to preserve mankind, a utopian colony is established on the Moon tasked with finding solutions to Earth’s problems with IO. IO is the artificial intelligence developed to help create these solutions. But when IO detects a possible future corruption within the Moonhaven community, their pristine, utopian society begins to crumble.

Bella (Emma McDonald) is a pessimistic pilot who enters the utopia after being commissioned to bring the Envoy, Indira Mare (Amara Karan) and her bodyguard Tomm (Joe Manganiello) to the Moon to deal with said future corruption. But what Bella doesn’t know is her connection to Moonhaven and the critical role she’ll play in its survival. Despite the series of idealist perceptions and philosophy, as Bella states in the first episode “darkness finds a way.”

McDonald shines in her performance of Bella in the series. Bella serves as the ‘way in’ for  audiences, often remarking on the syrupy sweet notions of the Moon. McDonald’s performance is only enhanced by the rest of the cast. Detectives Paul Sarno (Dominic Monaghan) and Arlo (Kadeem Hardison) brings a comedic relief to the heavy topics covered in the show. Their entry in as an almost buddy-cop story arc brings some of the most tender moments in the show as they develop their skills and uncover the secrets of their society.

To build a sci-fi world from scratch is a feat of its own. There’s dozens of intricate threads that need to be woven into the metaphorical rug to create a working world. While Moonhaven does a good job of weaving together these threads, there are a few that were left out or became loose in the process.

The society created feels familiar with stark differences that at times can be jarring. The rules of the society are thrown at you when needed for plot explanation and you have to keep barreling through. Often leading for you to say to yourself: “I mean, sure?” The dialogue is whimsical and lyrical. As you listen to the Mooners speak, it’s strange at first but becomes entrancing over time. You feel as if you are slowly being brought under the spell of the utopia too. Unfortunately, you can be brought out of the spell just as quickly at a peculiar phrase. Normally these terms are used as a replacement for violent-coded words or words that have negative connotations, which in a utopia where violence is almost unheard of, this makes sense to do.

The narrative of Moonhaven is a common story device within sci-fi. The Earth will end, so we create AI or a type of technology to solve our problems. Only the true problem are the humans themselves. But the creative team have taken interesting steps to ensure they would deliver interesting new takes on a common device. However, some episodes feel sluggish in comparison to the first episode. But even with episodes that are sluggish, the world building and perspectives given about issues within Moonhaven are enough to keep you watching and not scrolling through your phone.

Moonhaven is a sometimes syrupy sweet, but thrilling addition to the sci-fi landscape.