Thrillers and by extension horror films, are best when they tap into a collective sense of fear or dread. Exploring a shared commonality through some strange and unexpected prism. That’s what makes the new techno-thriller Cam work so wonderfully. By diving into the, for most, unfamiliar world of  camgirls, it’s able stroke at something most people worry about in the back of their mind: identity theft.

What helps set Cam apart from a see of other things, is it’s ability to juggle both an explanation of one corner of the internet, while telling a compelling story. That’s mostly thanks to an extremely solid script from Isa Mazzei. Not only does she share title credit “a film by” with director Daniel Goldhaber, but she herself is a former camgirl. The authenticity she brings to things, helps give shorthand to those who may not have an understanding of that world. She never vilifies things, making even the other performers we meet simply women merely performing a job. Rivalries are hinted at, but it’s just another aspect to the game at hand.

While others may be willing to do anything to get ahead, Alice lives by 3 rules. A small gesture, but a means to keep herself in check and relatively safe. She doesn’t tell her fans she loves them. Public shows are a no-go and she never fakes her orgasms. Were she to give in and do any of those, it would surely push her past the goal she so hopes to achieve, yet she’s steadfast in her resolve. This makes it easier not only to root for Alice, but feel invested in her plight when things turn south.

One fateful morning, she isn’t able to log onto her account. That’s because someone else is already broadcasting, under her name. Some strange doppelganger is in her place, upping the ante in terms of risqué material. What follows is a terrifying look at what it means to have a social or online presence or persona in the digital age. Mazzei and Goldhaber never attempt to dive outright into exploitation territory, though the desire is probably there. Instead they focus on Alice’s fractured mental state and the smaller moments that probably plague the life of a camgirl. She’s just as afraid of her mother (Melora Walters) learning her line of work, as she is of an over-obsessed fan popping up in real life.

From start to finish, Cam totally belongs to Madeline Brewer. She’s on-screen, in one form or another, for the entire runtime. Absolutely riveting and fearless as Alice/”Lola”, she paints the picture of someone with very little in their life, but a whole lot to lose. The shifts between when she’s “on” and everyday life may be small, but speaks volumes for the person she’s inhabiting. Without her, the whole film falls apart or threatens to spill over the top and lose some of it’s punch.

Cam best highlights what can make genre films so entertaining. It focuses on shining a light on a field that most people may not be familiar with and creates a unique character study ties up in the mechanics of a thriller. Some make take umbrage with the reveal in the third act of what may be going on. Yet, the “showdown” plays out as a stunning commentary on how we see ourselves and how others view us. If there’s one truly impressive aspect here, it’s that this is only the first movie by Mazzei and Goldhaber. They’ve created a stunning and powerfully assured film. The kind of which most people will talk about for years. At the very least it signals the arrival of two new strong voices. Regardless of whatever they tackle next, Cam will prove to be a tough act to follow. 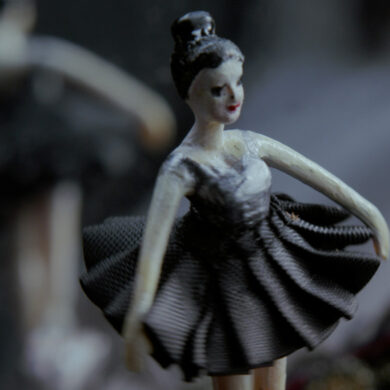