Panic Fest: ‘Mom And Dad’ is a Delightfully Immature Exercise in Chaos

Brian Taylor is a writer and director known for hyperkinetic thrillers with a twisted sense of humor. So it’s a given that a film like Mom and Dad where children are inexplicably hunted and slaughtered by their own parents is going to be a wild ride. What is impressive is how seriously he takes the subject matter along the way and how many variations on the theme he manages to work into a very fast-paced film.

Mom and Dad takes its time developing the core family that we follow through the ensuing chaos. Nicholas Cage and Selma Blair are perfectly cast as suburban parents barely holding it together to begin with, and Anne Winters and Zackary Arthur are just as good playing their bratty, ungrateful children who must grow up fast as an inexplicable horror descends upon them all.

Casting is important in a film like this. Blair – who is always creepy and ethereal no matter the role – is gifted with a role that is perfectly suited for her. Nicholas Cage… is Nicholas Cage, and this is one movie where that is certainly not a bad thing. The surreal and frightening humor that these two veteran actors bring to their characters is crucial for misdirecting what a dark film this truly is. No one in the film knows what is happening or is immune to it. It is speculated to be some form of military or terrorist attack, implied to be transmitted through video signals. But Mom and Dad doesn’t give us enough of a breather to even try to learn anything beyond that. The film’s third act is nothing but cleverly-orchestrated melee and cat-and-mouse games that showcases just how evil Blair and Cage can be, as well as how satisfying seeing bad things happen to them is. A pivotal cameo by legendary character actor Lance Henriksen doesn’t hurt either.

Along the way Taylor gives us so many memorable scenes that Mom and Dad almost feels like a collection of different films on a similar theme. We see teenagers running from animalistic middle aged hordes that could be out of any of the best recent zombie films, a frightening scene where Cage attempts to construct a basement man-cave to sorrowful results, and a scene involving the birth of a baby that has to be seen to be believed.

For all of its eagerness to cloak the infanticide epidemic cloaked in mystery, Mom and Dad is a film that could benefit from a little more explanation. By the end of the film nothing is revealed and nothing is resolved. While such an ending is more fun in the case of this film than it is in others, the whole thing just feels like a bit of dark and malicious fun whose biggest practical joke was making the viewer think it had a deeper message. It is simply a film that is worth watching and rewatching for the violent and cathartic spectacle that it is. 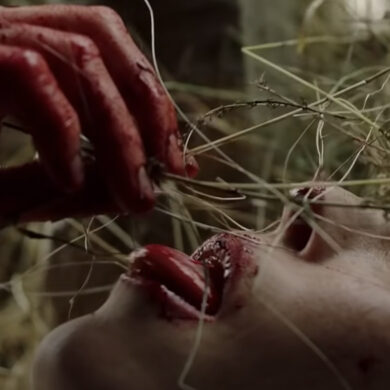 Sundance 2022: A Shapeshifting Witch Wields Horrific Power in the Trailer for ‘You Won’t Be Alone’