Review: There’s No Pain, Only Intense Sensation in ‘Perfect Skin’ 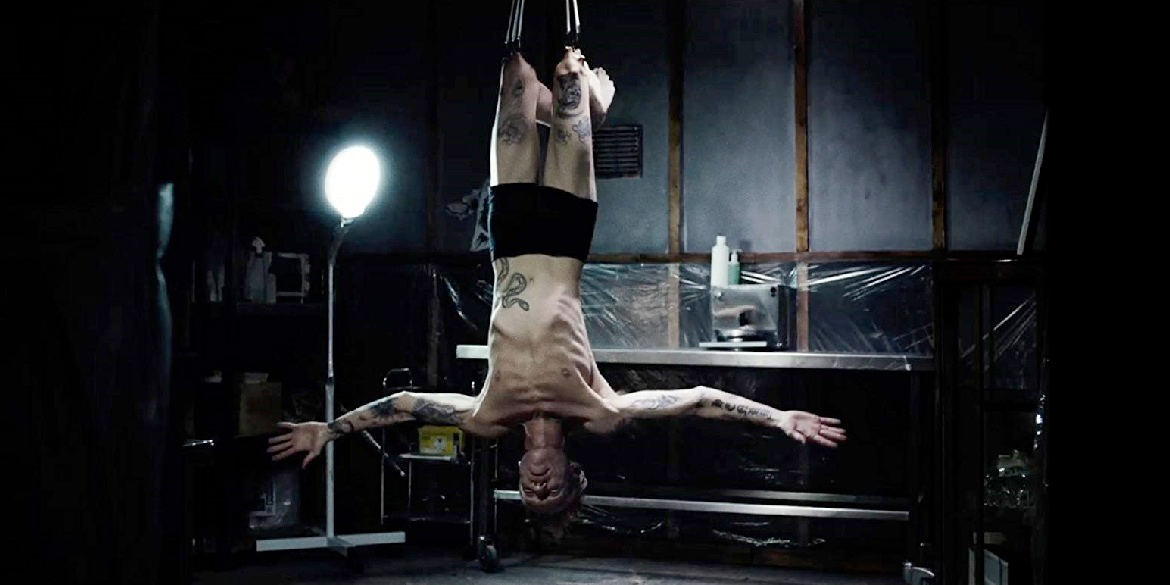 We all have them… images in horror movies that make us cringe. It could be eyes getting poked or fingernails being pulled. For me, it’s body mutilation. No matter how often Bob Reid (Richard Brake) states in Perfect Skin that there’s no such thing as pain, only intense sensation, I can’t imagine that hanging from chains hooked into your skin would be anything less than excruciating. (Plus, I can’t accept the fact that your skin wouldn’t just rip and tear apart.)

Luckily, I don’t have an aversion to getting tattoos. If so, the repeated close-ups of needles injecting ink into the epidermis would surely have sent me over the edge. That’s Bob’s primary job: a tattoo artist. Piercings and rings of all kinds are simply the icing on the cake for his work… and pleasure. When he meets Katia (Natalia Kostrzewa), he comments that she has “perfect skin” for tattoos. That also happens to be the name of his financially struggling shop in London.

Impatient about Katia’s reluctance to allow Bob to give her a tattoo, he capitalizes on events so that he can stage her disappearance. He then holds her captive so he can transform her into a new woman, by using her body as his canvas. That’s about it for the plot of Perfect Skin, although a subplot exists about the mystery of her disappearance, driven by her roommate, Lucy Dalton (Jo Woodcock). Although you might expect it to be the focus, this doesn’t seem to be the point of the movie.

Instead of a mystery-thriller, Perfect Skin goes all-in as a psychological thriller. Slowly revealing aspects about Bob and his life outside the shop (and its dungeon-like basement), when he’s not stabbing needles and inserting meat hooks into Katia’s skin. Brake is excellent in the role. Probably familiar from any number of movies and television shows, I recognized him most recently as “The Chemist” from Mandy. He convincingly turns on a dime from caring family man to cruel psychopath.

The movie is a solid feature film first effort for writer (with Dusan Tomac) and director, Kevin Chicken. The 110-minute running time, which might seem a tad long, zips by due to his use of short scenes and visually interesting transitions between them. The music alternates between what I’d call “industrial dance,” perfect for the seedy nightclubs sometimes seen in the movie, and classical, an auditory representation of the physical beauty Bob attempts to achieve.

Kostrzewa is also excellent, although a little transparent to us when she attempts to play along with her captor while really seeking a way to escape. It may have been more intriguing for us to believe she was also being transformed mentally, then learn as a twist that she’s devised a plan. Perfect Skin avoids the easy ending where, driven to her breaking point, Katia might have exacted bloody revenge on Bob. That isn’t to say he doesn’t get what’s coming to him, though.

In its entirety, the movie had a cumulative effect on me. What I mean is that it built for me to a point late in the movie, where I truly believed Katia was more beautiful than she’d ever been. Does that mean I have some heretofore, undiscovered proclivity toward body mutilation? Or, did I fall right into the hands of the filmmakers? With lingering close-ups of her new face and stunning eyes, I have a feeling they achieved their purpose in making Perfect Skin.

80
Review: There’s No Pain, Only Intense Sensation in ‘Perfect Skin’