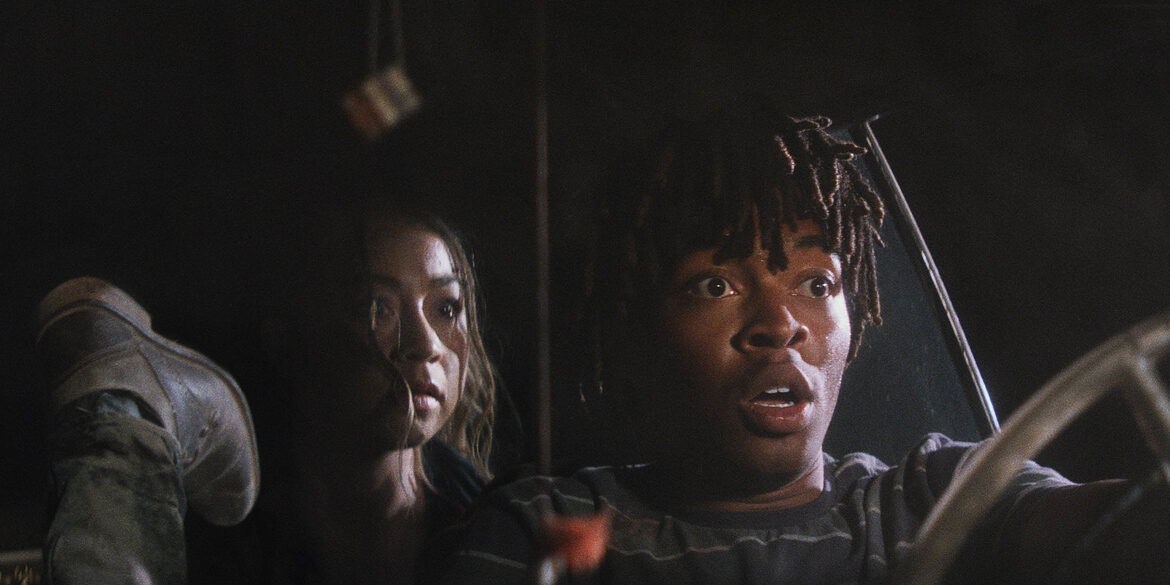 One part high school coming of age film, a dash of Coen Brothers and race against time is the set-up for Manuel Crosby and Darren Knapp’s First Date.  An erratic man, talking to his girlfriend and begging her to leave the city and go to Mexico with him is an interesting way to start a movie about high schoolers on a date gone awry. The man is being watched by someone and eventually is killed before we get the title card. It’s a tonally off-putting way to begin this tale that ends with a laugh. If you aren’t with the film in this first scene the rest will feel like a drag and might not work at all.

Meanwhile in suburbia, high school kid Mike is run off the road by the cool guy Chet (Weird Science, eh!) in front of his crush, Kelsey. It’s a scene we’ve seen many times in other teen films and continues with the all too familiar plotting as his best friend pushes him into calling her up and asking her out. Of course, she says yes. The only problem is, he doesn’t have a car and he said he would pick her up. No worries, his best friend has already found a car on Craigslist and he has to show up with $3,000 to buy it.

This is where the dominos begin to fall for Mike as one problem leads to another in a chaotic night as he struggles to get to Kelsey. We are flooded with colorful characters including a gaggle of villains who are after the car that Mike just purchased for unknown reasons, a pair of police officers that seem to be everywhere and the cars original owners who want to relive their youth.

It’s a lot to unpack in it’s 99 minute running time where a romantic plot should be the driving force, it’s given the backseat to all the quirky set-ups. Some work, some not so much. As the pieces continue to build on top of each other in one big final shoot out in a mysterious junkyard, I felt myself missing our central love story and their lack of connection. There is very little our lead, Mike, is even given to do that makes us care about him or his motivations with Kelsey.

The film seems to think randomness and strange side characters equal a fun and engaging experience for its audience. Unfortunately, even the bombastic and rather fun ending gun fight, seems a little too late. The film quickly resolves all of its many plot threads and sends our characters on their actual first date which might be too little and far too late for us to care.