The apocalypse happened. “How” morphs itself into “What Now?”

Behind a plethora of sweeping landscape shots depicting the years following an apocalyptic event, Mathieu Turi’s feature debut Hostile gives us the story of Juliette (Brittany Ashworth) and her struggle to survive.

Wrong. It took a while to digest this film as initially I had written it off as “just another post-apocalyptic film.” Let’s face it, there are so many in this genre.

The film centers around Juliette and her struggle to stay alive following a debilitating car accident while on a scavenging mission. She must not only survive the barrenness of nature while badly injured, but a threat far more sinister.

We’re offered abbreviated glimpses into her life pre-apocalypse as she longs for the days before everything went sideways. During these sequences is when Ashworth really gives a believable depth to her character. There’s a palpable honesty in her interaction with the people in her previous life’s sphere – most notably the sophisticated and charming Jack (Gregory Fitoussi).

Juliette’s memories throughout the film not only to provide a contrast to her current situation but also provide a good break in the inescapable dread of being surrounded by unknown dangers.

The tension in the film is abundant and while the idea of the damsel Juliette needing to be saved borders on tongue-in-cheek, the climactic confrontation is equal parts tense and emotional.

Hostile recently screened at Panic Film Festival in Kansas City and is out now. 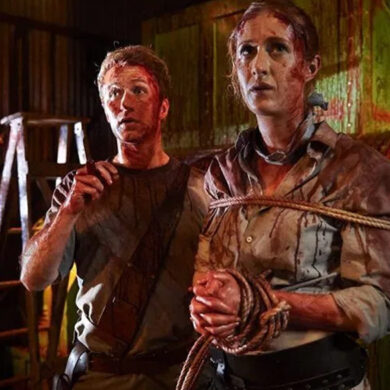