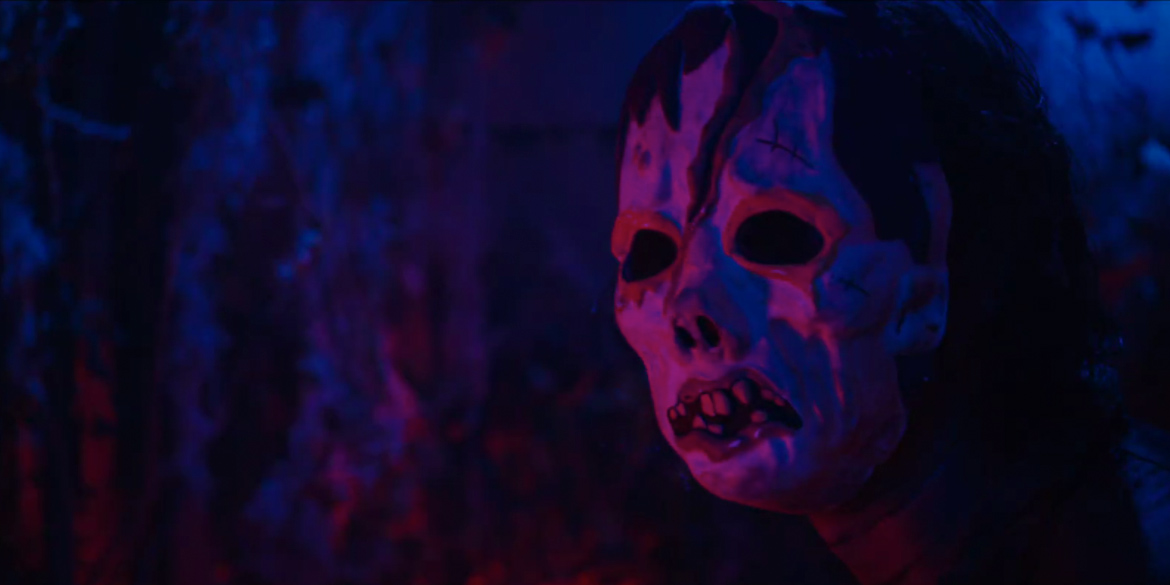 What if you were uglier on the inside than what we see on the outside? The old expression of don’t judge a book by its cover applies to the monsters within the extreme horror film ‘Haunt.’

Eli Roth and the writers of ‘A Quiet Place’ (Scott Beck, Bryan Woods) want you to visit the newest extreme haunt this Halloween. One that promises to feed on your darkest fears. The trailer for ‘Haunt’ starts out like any trailer we see for a haunted house but quickly turns into something much more sinister than we could have ever imagined. Not only are the group of friends in for a frightening night but they slowly realize the monsters are real.

“It’s the end. Say goodbye. Close your eyes. Keep the monsters from creeping.”

The rise of extreme haunts in recent years have opened the door for these kind of sub-genre haunted attraction films that allows us to explore how far we will go both as a viewer and attendee at these kind of events. Such haunts as Mckamey Manor in San Diego really brought extreme haunts to the forefront followed by larger commercial haunts such as Blackout.

But this isn’t the first time extreme haunts have been tackled in a horror film, take Tobe Hooper’s Funhouse for example, and certainly won’t be the last as it continues to be a growing trend for thrill seekers that want more than just a latex mask and a startle scare. That is where ‘Haunt’ taps into a new generation of audiences of Halloween fans.

So how do these group of kids end up in this mess?

Katie Stevens plays Harper, who is a college student involved in an abusive relationship who also grew up in an abusive household. Struggling to end the relationship her friends coax her out on Halloween night to go to a party where she meets all around good guy Nathan (Will Brittain) The group decides to ditch the party and go find something more extreme to do on Halloween night.

This is never a good idea because nothing good happens after midnight – especially at an abandoned building where extreme haunts take place. Oh you want to keep your cell phone? Nah. Not today. You won’t need it in this haunted house! The group decides to check it out and realize somewhat quickly something isn’t quite right.

The posters for ‘Haunt’ feature four simplistic mask that look like slightly modernized versions of Ben Cooper’s classic masks. They feature a Ghost, Witch, Devil and Clown. By serving up something that feels so innocent it allows the audience to let their guard down a bit before literally hitting them over the head with a night full of terror.

While the sets look pretty simple, the monsters that live within them are a bit more complex. The simplicity of the idea is self contained in one location. Creating mini escape rooms and immersive theater helps blur the lines of what is real and what is fake. The minimal set design works both as a film and as a haunt if I were going through it. The characters are not yelling at the customers but letting their actions and eerily quiet atmosphere creep them out letting their imaginations run wild as to what may happen next.

Blurring the lines between what is real and what is fake is the key to the whole film. They never try to sell you it is real with found footage like ‘The Houses October Built’ and honestly they don’t have to. The characters featured on the poster that the kids are introduced to in each room are creepy in their own way. Even with the “extreme” nature of the haunt it never feels like they are trying to push the subject matter and shove it in your face. It feels like you are part of the group going through the haunt but are seeing it play out from safety of your couch – and that is where the film succeeds for me.

It’s a great film to get you in the mood for Halloween or to watch just before you head out to your local haunt this Halloween season.

HAUNT will be in Theaters, On Demand and Digital September 13, 2019.

81
Review: ‘Haunt’ is Just as Creepy as it is Extreme