The Haunting of Bly Manor: ‘The Two Faces, Part 1’ Balances Love And Possession 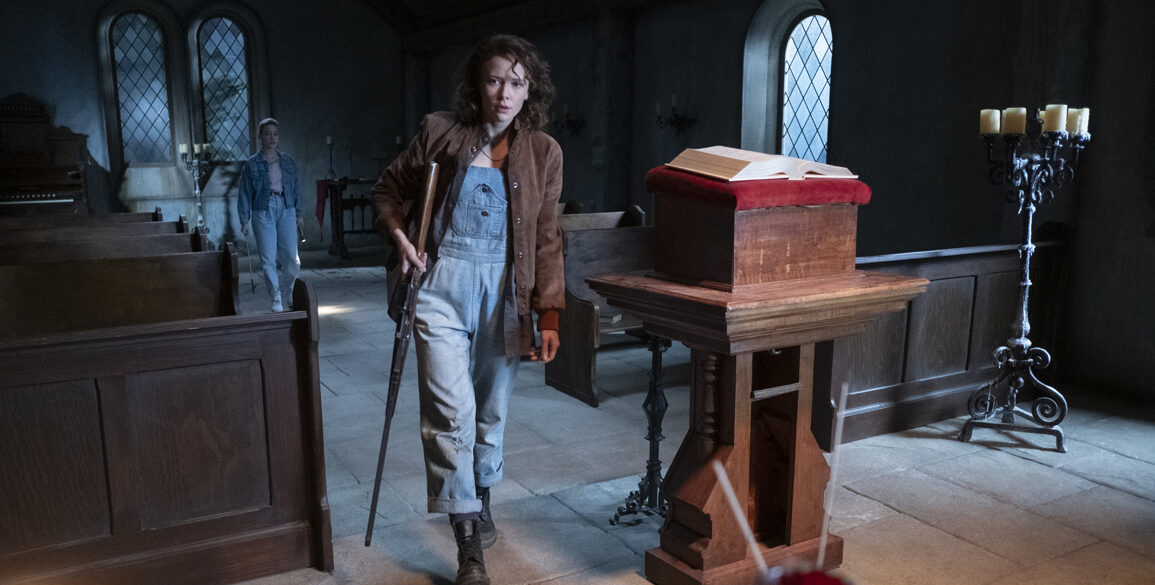 Before reading my recap on this episode of The Haunting of Bly Manor, make sure to check out my episode 1 and episode 2 recaps, here on Downright Creepy.

I think I have come out of the mindset of anticipating things like jump scares and the spooky sightings of ghosts. For now, at least. The Haunting of Bly Manor has quite a bit of exposition and groundwork to layout before it can justify the spooks I hope to see in future episodes.

We are given insight into the relationship between Peter and Rebecca, and the start of Flora’s mysterious behavior. This show is taking the time to cultivate the differences between showing what love is versus possession (both kinds), it’s a very delicate topic but I think it was covered thoughtfully and mindfully. Although it is exposition-heavy, it doesn’t take away from my interest in the show since it’s so beautifully woven together. This episode left me feeling pity for some characters, love for others, and distrust in one.

As always, read at your own risk, spoilers are below.

Following Miles’ fainting at the end of ‘The Pupil’, we see Peter Quint’s reflection in the window again.

We are taken a year prior as Peter runs miscellaneous errands for Henry’s extravagant life – new suits, expensive alcohol, chauffeurs, and doormen.

Peter returns to Henry’s office, where we learn that Henry’s next appointment is to interview for a new au pair – Miss Rebecca Jessel. The interview unwinds similarly to Dani’s in the first episode – why would a young woman want to be a nanny, ulterior motives, and her future ambitions. We learn that Rebecca has gone through college to learn about public law and genuinely wants to help care for the children.

Dani shows the policeman the polaroid of Rebecca and Peter, claiming it was Peter who was on the parapet and stalking about around the Manor. After sending the children off, Mrs. Grouse tells Dani that Peter took over 200,000 pounds from one of the Wingrave’s bank accounts before disappearing. The Policeman concludes that Peter must be gone after having seen the car lights. Mrs. Grouse, however, is not happy with the lack of effort. She warns the Policeman about calling Mr. Wingrave and his apparent connections with the police department. The Policeman bows down and agrees to take one more look around.

Mrs. Grouse tells Dani that she is going to call Owen and Jamie for backup before Dani takes a fire poker, determined to make her own sweep of the Manor and grounds.

After picking up Rebecca in London, Peter admits he has been stretched thin playing all the parts at the Manor and for Henry. Rebecca asks about how they were coping after the loss of their parents, and Peter reveals they’ve been doing poorly.

Rebecca is introduced to the children and other workers – and what do we find out? Rebecca is the source of Flora use of ‘perfectly splendid’. During the introductions, Miles wanders off to a brooding Peter, who shows the child how to use a zippo. Because nothing bad happens when you give a child a lighter.

Flora brings Rebecca to the statue garden – which I hope will play a creepier part in the future. We hear the narrator tells us that Rebecca wished she would never leave Bly, and guess what? That’s exactly what will happen.

Dani searches through the statue garden for Peter when she comes across a gun bearing Jamie. Together, they search the grounds and finally come to the chapel where Mrs. Grouse has left candles burning. Jamie claims Mrs. Grouse is ‘always forgetting them’. I’m like 90% certain that Mrs. Grouse is dead and is some sort of ghost that is stuck at Bly and doesn’t know it, a la The Sixth Sense.

After returning to the Manor, Owen suggests they stay up in case Peter returns. Flora is ecstatic – she just can’t wait to stay up all night in case something happens. Then, as all small children do, she and Miles are dead asleep. Armed with mugs of alcohol, the group theorizes what could be happening. Owen believes Peter is the source of the prank calls to the Manor and is trying to contact Rebecca, not knowing she died. Or he has spent the money and is looking for more.

Rebecca and Flora play with some homemade dolls – which resemble Owen and Flora. Which is much lovelier than the creepy baby-doll faced ones or the straw talismans she makes. Peter comes with a bouquet of flowers, which hahaha Rebecca they are not for you, but for Flora! Peter is big braining using manipulative tactics to get you to think about him! Ha! Classic! Once the ladies leave to put the roses in water, Miles asks Peter if he took them from Jamie’s garden. Which! Aha! Peter is possessing Miles in the present then. Peter then tells Miles that people are like locked rooms, and you need to find their keys. Now we know where that weird key thing Miles was on about originated from. I’m also getting some ‘eat the rich’ vibes off of Peter after he complains about the manor being too big for the family.

That night, as its storming, Rebecca invites Peter to stay until it blows over. As they have tea in the kitchen, Peter begins telling Rebecca about how she’s too smart for just being a nanny and what are her true aspirations. Rebecca reveals she wants to be a barrister, but that the other women in her year had quit their pupilage’s due to nonconsensual advances.

Later, they take drinks into one of the sitting rooms. Where, if Peter hadn’t been giving off very possessive and controlling vibes, I’d say he would be quite the charmer. He tells her about wanting to do good for the world, how society holds him back because of his socio-economical status, and – as he goes for the very sly, barely touching her hand – tells Rebecca that he is hopeful about them.

Mrs. Grouse wakes up leaning on Owen’s shoulder – which is very cute and I hope something blooms between them and leads to the inevitable angst that is Mrs. Grouse not being alive. Meanwhile, Dani and Jamie talk about the ‘wrong kind of love’ Rebecca and Peter had. Jamie then states what I believe is to be the overarching theme of the series: love vs possession. Mrs. Grouse breaks them out of their loving gazing into each other’s eyes. As they bring the children to bed, Miles reveals that he had a bad dream where he hurt Mrs. Grouse. I’m starting to think Peter possessed Miles and killed Mrs. Grouse.

As Dani lays in bed, she starts to see a bloody, shaky hand reaching out to her. My best guess? It’s connected to the glasses and spirit she sees in the mirrors.

As Flora and Miles play go fish, Peter returns to the Manor. When Miles asks about his Uncle Henry, Peter tries to console him with a story about how he too lost his dad when he was younger. He brings out the zippo again and gives it to Miles to cheer him up.

That night, Peter comes to Rebecca’s bedroom. After claiming he can’t sleep, Rebecca pulls him in, and they, of course, have sex.

As Mrs. Grouse prays in the chapel, she sees a crack in the wall – the same as in the kitchen. Owen breaks her out of her reverie, telling her he’s done another search of the grounds and will ask his neighbor to watch over his mother for the night.

When Dani enters Miles’ room, he’s acting up again. He asks if they can have a picnic after they find Flora.

Flora shows Rebecca the doll she has made for her – black hair and a black dress. She tells Rebecca that Peter called her beautiful and that he is fun to have around the Manor.

Flora stands at the edge of the lake with the Rebecca doll. Dani comes and grabs her, leading to Flora kicking and yelling. On the other side of the lake is Rebecca.

After an examination by a doctor, he claims Flora and Miles to be physically healthy. Dani expresses her disappointment with Henry to Mrs. Grouse, and how strange it is for Flora to be by the lake when she hates it so much. Miles overhears this and tells them that Flora doesn’t hate the lake and is a liar.

The next morning, as Rebecca tries to leave to tend to the children, Peter asks her to stay for a while longer. When she starts to leave, he grabs her arm, demanding her to get into the bed.

Later, Peter takes wine out of the cellar and brings Rebecca to the forbidden wing. They enter the Wingrave’s suite where Peter had laid out a fur coat for Rebecca. He claims Henry has him taking inventory for auction and that he approved of her taking the coat. He then persuades Rebecca to strip and wear only the fur. Peter takes polaroids of her in the coat and them together – the same photograph Dani found during hide and seek. Just as they begin to have sex, Mrs. Grouse catches them in the act. After Rebecca excuses herself, Mrs. Grouse scolds Peter for going through Claudia Wingrave’s things and warns him that she would personally see to it that he is gone.

In the kitchen, Owen, while spitting out pun after pun, has everyone taste the cake batter to decide if it needs more strawberry (Flora’s opinion) or lemon (Miles’ choice). It should be made clear: I would die for Owen. I truly hope nothing bad happens to him. As he makes the rounds, Peter becomes upset when Rebecca gives her opinions.

That night, Rebecca finds Peter packing his belongings, intending to return early to London. He yells at her that she is a hypocrite for ‘tasting his batter’ after her confession about not wanting to be taken advantage of during her pupilage.

Miles and Flora announce that it is ‘storytime’. As they gather in the foyer, Owen tells Dani that storytime is how Flora and Miles process their emotions. Flora’s monologue is about a kitten who is trying to look for her mom. While Miles’ poppet the puppet monologue takes some seriously dark turns. The play is interrupted by a phone call – it’s Owen’s neighbor. His mother has passed. Sorry Owen, I spoke too soon.

After the group disbands outside the Manor, Dani turns and sees the glowy-eyed spirit once again. Which, now instead of giving me a nice little spook, seeing him is like seeing an old friend. But then he gets sucked back into the Manor.