REVIEW: ‘Annihilation’ is a Methodical Trip into Another Reality

I’ve never been through the St. Marks National Wildlife Refuge in northwestern Florida but I’ve visited some pretty desolate places before where I was the only person for miles. It’s an unsettling feeling which is a great description for what viewers will experience while watching Annihilation. Writer James VanderMeer has incorporated a lot of the bizarre nature elements he’s witnessed in the refuge into his story which director Alex Garland (Ex Machina) has brought to life in his second directorial effort.

As our movie begins, we witness a strange colorful object traveling amongst the stars to land on Earth, striking a lighthouse near the ocean. Immediately, a rainbow-like effect begins to develop which is actually an entity we will soon know as “the shimmer.” We’re then introduced to our main character of the film, Lena (Natalie Portman), a biologist who is mourning the loss of her military husband Kane (Oscar Isaac), who has been missing for a year. However, Kane soon returns but he’s acting odd, unsure of where’s he’s been or how he got back. Once he starts to cough up blood and go into convulsions, Lena calls for an ambulance, but before they can make it to the hospital, they are intercepted by what appears to be a black ops group.

Lena soon discovers that her husband’s assignment was to investigate the shimmer, which is growing at a rapid rate. Scientists believe it could eventually annihilate the world yet they know nothing about it. Everyone and everything that enters never returns, with one exception… Kane. However, he’s not talking as he’s now entered into a coma. It doesn’t take long for Lena to talk her way onto the next mission entering the shimmer as she wants answers as to what happened to her husband. The team is comprised of all women under the command of Dr. Ventress (Jennifer Jason Leigh) but once inside, the chain of command soon breaks down as reality is quite different in the shimmer.

It’s very refreshing to see an all-female commando squad as males are clearly secondary characters throughout the movie. This puts the viewer just a little off-kilter and that’s only the beginning. With only a few exceptions, much of the cast is acting along a baseline, expressing very little emotion. It’s unnerving to watch after a period of time and I don’t believe that was unintentional. The feeling of dread is ever present with moments of shock thrown in to remind you of the extreme dangers that exist within the shimmer. Nature is reclaiming the area while mutating into new species of plant and animal life, some of which are deadly. There is much more to the shimmer and the answers lie within the lighthouse.

Music and sound effects also enhance the visual experience, which is quite stunning upon the reveal in the final act. Some musical choices sound like a mix of guitar ballads and some classic Crosby, Stills and Nash while the sound effects sound otherworldly and reminded me of Under the Skin (2013). It all adds to the overall uneasiness of the presentation. The plot does move along quite slowly at times, which may not be for anyone who prefers a bombastic plot full of explosions. However, if you prefer to have the answers served up methodically, I think you’ll enjoy Annihilation.

Annihilationis based on the Nebula and Shirley Jackson award winning novel of the same name written by James VanderMeer. It’s also the first book in the Southern Reachtrilogy which Stephen King praised as “creepy and fascinating.” While the ending of Annihilationisn’t a major cliffhanger, it implies there is more to the story. However, if the powers that be decide it’s a one and done effort, it shouldn’t deter too much from the overall enjoyment of the film. It answers most of the questions with the promise that there is more to discover. We’ll have to wait and see what happens but I’m certainly open to revisiting this world again.

81
REVIEW: ‘Annihilation’ is a Methodical Trip into Another Reality 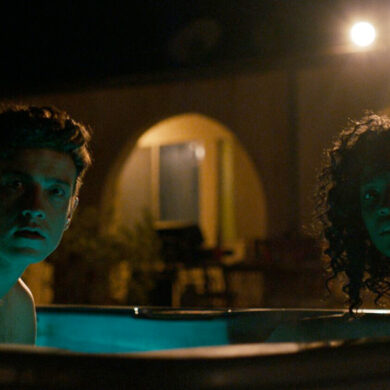