Anthologies are common in the horror movie genre, probably more so than any other genre. From ‘Creepshow’ to ‘The ABC’s of Death’, there is a long cinematic history or telling scary stories this way. ‘Ghost Stories’ premiered at SXSW this week and adds to that legacy. The new film by Andy Nyman & Jeremy Dyson was shown as part of the “Midnighters” slate of films in Austin. This is actually a self-adaptation of Nyman & Dyson’s play that had a famous run in the West End of London in the early 2010’s. It’s an anthology film with great setups and unrelenting and horrifying scares. Moreso though, it’s a film about supernatural stories we’ve all heard and experiences we’ve all had, and it’s frighteningly good.

The film is about Professor Phillip Goodman (Played by co-director Andy Nyman). He spends his days attempting to debunk supernatural stories and any notion that there’s more to human existence than the here and now. He receives a call from a personal hero and inspiration for his own skepticism. Upon visiting the old man he receives 3 cases that have proved to the older former skeptic that the supernatural does indeed exist. Each case provides us with an accompanying short film segment. The first concerns a night watchman played by Nicholas Burns (The Crown, Nathan Barley). The second is about a Teenager played by Alex Lawther (The End of the F**cking World). And the final case involves Martin Freeman (The Hobbit, Black Panther).  I won’t go into any more details of the plot because to discuss them would be to take away from the experience and this is movie best experienced completely cold.

To be clear, the film works incredibly well as a piece of conventional horror. Or supernatural horror. Or meta horror. ‘Ghost Stories’lends itself to be viewed through whatever prism you choose. The most interesting thing it does is it keeps Professor Goodman’s story central to the film. Too often in anthologies, the framing story feels like something that exists purely to serve a connecting tissue. Not so with ‘Ghost Stories’. You’ll be just as invested and frightened by what’s going on his life as we are any of the three case studies. Another thing the film did so well was refusing to let up in its scariest moments. Whereas most modern horror movies feel mostly safe with punctuated moments of terror, ‘Ghost Stories’ inverts that feeling for me. I never knew when the light at the end of the tunnel of dread would be coming, but I knew the light wouldn’t last long.

The performances are also all incredibly real and well done. Every actor is giving this film full effort and that’s much appreciated in a horror movie. Lawther in particular stood out for me. He conveys a very typical fear that young men often have, and what would happen if supernatural forces intervened. They would completely overwhelm those fears and he does a perfect job of capturing that. The stories also make a great and unique use of humor. Laughs don’t come from conventional jokes, more so from the uncomfortable feeling you get before fear sets in. You laugh in this movie to hold off the feeling of being scared just a little while longer. There’s a particular moment with Martin Freeman calling out into the dark that got a good nervous chuckle from me.

I did a have a couple issues with the opening 10 minutes of the film. A few performances and moment felt false and didn’t quite gel I felt. However, all of those moments were made understandable by the last fifteen minutes of the film. I don’t intend to be annoyingly vague, but this film ends with one of the strangest and possibly most brilliant moments I saw at the whole festival. It’s been a few days since I’ve seen it and I still cannot stop thinking about it. All I can say is ‘Ghost Stories‘ absolutely goes for it and I loved it for doing so. This is going to be a movie that horror fans will be talking about all year.

‘Ghost Stories‘ was a movie I barely made it to and i’m so glad I did. I would have been kicking myself until it comes out later this year knowing I’d missed out on an opportunity to see a great entry in the anthology genre. It’s being released by the IFC Midnight label in America so it could be more likely to be available on VOD in your area. But I would encourage everyone to seek this out in a theater and a full theater. Being surrounded by hundreds of people at 1:30am and feeling the room collectively sink in our seats and grow more tense was one of my highlights at the movies this year. 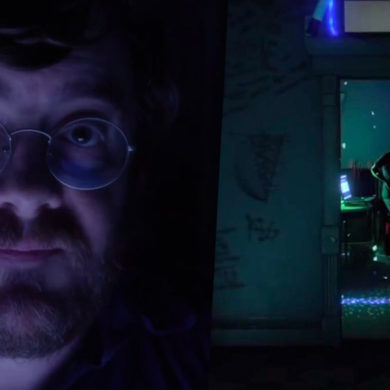 E3 2018: Ubisoft and SpectreVision Team Up for First Look at ‘Transference’ VR Trailer