Review: ‘Puppet Master: The Littlest Reich’ is the Wildest & Most Uneven Film Of The Year

When thinking about the longest running film franchises, what comes to mind? Aliens? Star Trek? Star Wars? It may surprise you then that the Puppet Master series has endured for almost 30 years and 12 features. Sensing the series was running long in the tooth, the latest entry is a soft reboot of sorts. Wiping the slate clean means everything is new again and in The Littlest Reich, it’s an excuse to get into all sorts of crazy, disgusting and horrific shenanigans. When a film combines the writing talent of S. Craig Zahler (Bone Tomahawk) and the directing duo Tommy Wiklund & Sonny Laguna (Wither), you can expect something weird. In this case, everyone gets more than they could hope for.

Starting out in 1989, Andre Toulon (Ude Kier) is killed by local police. Well, after unleashing his murderous puppets on a pair of unsuspecting lesbians, that is. This version of the Puppet Master lore strays immediately from the original, reenvisioning Toulon on the side of the Nazis, rather than against them. Rather than over explain his backstory, a beautiful black, white and red montage overlays the opening titles, an artistic flourish in a film unworthy of such a move.

Jumping ahead to present day, Edgar (Thomas Lennon) a recent divorcee,  ponders attending a convention celebrating the 30th anniversary of the Toulon murders. His reason for going involves wanting to sell one of his brother’s Toulon dolls, which are able to fetch upwards of five thousand dollars. Shortly after he, his boss (Nelson Franklin) and new love interest (Jenny Pellicer) arrive, things get strange and bodies start dropping. Adding to the insanity is a veritable who’s who of genre icons, from Barbara Crampton to Michael Pare to Matthias Hues, all of this before the emergence of the film’s MVP, a simple bartender named Cuddly Bear (Skeeta Jenkins).

The best thing that can be said about The Littlest Reichis also admitting its greatest weakness: there’s little to no story to keep it churning. What semblance there is of a plot boils down to “things that happen in two seconds between kills.” Now, that’s not necessarily the worst thing in the work, specially when the practical effects on display are this ooey-gooey and absolutely brilliant. Tate Steinsiek’s SFX work is utterly fantastic and an ode to why sometimes it’s better not to use CGI. For anyone who’s ever seen a Puppet Master film knows, the kills have to be creative and good. These on display here aren’t just the best of the series, they’re flat out some of the best death sequences of the year.

Make no mistake about it, you should probably see this film in as sold out a theater as possible and at the latest show time available too. The Littlest Reichis for all intents and purposes, a Midnighter film best enjoyed with friends and booze. Seeing it at home, or alone, there’s a good chance the charm wears thin. Or, at least the less parts of the film will become that much more apparent.  In a way, it feels kind of silly to have to quantify the enjoyment of any movie in such a manner, but in this case it’s a helpful suggestion.

Thankfully, any time the film attempts to slow down or land an offensive joke, the puppets pop back up to save the day, or at least divert attention back where it belongs. And, oh, are there puppets galore! To use an over-adopted and trotted out phrase, “this isn’t your father’s Puppet Master”. Somewhere around 30+ puppets make appearances throughout the film. There could be even more than that, as there are multiple variations of old stand-bys like Blade, Torch and Pinhead.  Not only that, but several new puppets make their premiere here, including, you guessed it, a Hilter (as a baby) puppet, replete with tiny mustache, brilliantly named “Junior Fuhrer.” If that bothers you in the least, this may not be your cup of tea.

The Littlest Reichruns into that issue constantly, operating under the threat that its non-pc humor could be its undoing. Honestly, it can be a bit jarring, but that’s the grounds the movie wants to exist on. It wants to rankle viewers, either by the copious amounts of blood, troublesome jokes or a combination of the two. Harder to overlook is a slapdash production, whose story is so thin that the ending’s promise of “to be continued” doesn’t foretell of a coming sequel, but a proper ending to the movie. Entire subplots are developed almost entirely off screen!  Should the team behind this reboot gain a stronger focus next time, then there may be a Puppet Master film to suggest to the masses. As it stands now, this is a film to suggest to horror hounds and those adventurous souls in search of something offensively entertaining. 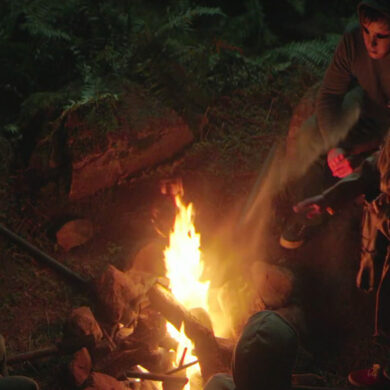