The Haunting of Bly Manor: ‘The Great Good Place’ Is Perfectly Splendid 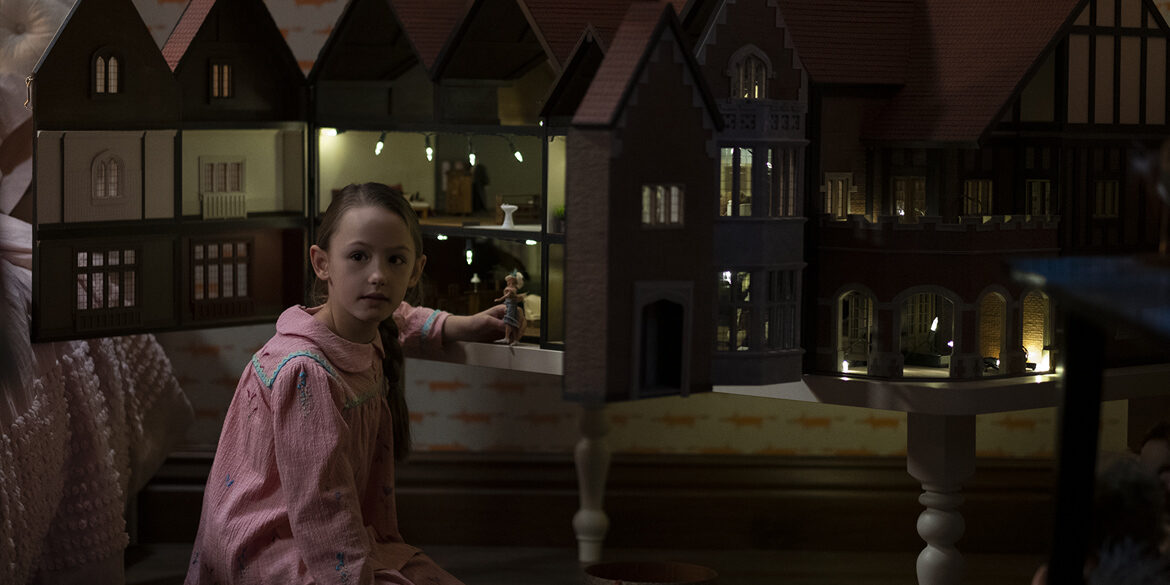 Before I get into the specifics of the episode, I will warn you now – read at your own risk, spoilers are below.

The pilot episode of The Haunting of Bly Manor is ‘perfectly splendid’ as Flora would say. We have all the great attributes for a good old fashion haunted house – shadows lurking behind corners, creaking floors, and all those creepy dolls Flora has.  Although there aren’t too many frights in this episode, the pilot establishes our main characters and the future plotlines that will definitely bring the scares.

The year is 2007. The episode opens on a woman (Carla Gugino) stands over a sink of water, singing ‘O Willow Waly’. We cut to a wedding rehearsal dinner as the guests talk about the extents of loving someone. During this speech a guest (Carla Gugino) arrives, a surprise for some of the guests. Later on in the evening, as the guests recant about ghost stories from different vacation spots, Gugino speaks up. The guests are drawn in with her ghost story, about a manor with two child who are subject to some very not nice things.

We are brought back to 1987, where an optimistic Dani Clayton (Victoria Pendretti) tries to navigate her way to the au pair interview. But as she crosses the street, a cab zips past her, and in the reflection?

A spirit with hauntingly bright eyes.

During the interview, Lord Henry Wingrave (Henry Thomas) dismisses Dani’s intentions for the position. He turns his nose up at her not having any prior au pair experience, even though she was a fourth grade teacher, and can’t fathom why a young woman would want the job. When he asks about what her ‘catch’ is, Dani bites back that the job must have a catch as well since it hasn’t been filled for at least six months.

Cut to Dani sitting in a bar, drinking a beer and circling jobs in the newspaper. When lo and behold, who walks in? Lord Wingrave. Dani grabs her drink and tells him she wants to give a toast to the most awkward job interview she’s had. Now that she knows she hasn’t gotten the job, she wants to know what the catch really was. Lord Wingrave recounts about the last au pair, Miss Jessel, who died on the grounds the previous summer. In a tit-for-tat, Dani gives him her catch – she can’t return home because she suffered from burnout teaching 25 kids. But she believes she could make a difference with his niece and nephew since she knows what its like to lose someone.

Dani returns to her hostel where she calls home informing them about her trial job over the summer as an au pair. We learn that she is totally ‘not running from anything’ as she packs her items, including removing the sheets strung about the mirrors. Before she leaves the room, we see the glowy-eyed figure once again, prompting Dani to leave for good.

A driver from the Wingrave estate, Owen (Rahul Kohli), talks with Dani as they approach Bly Manor. We learn that Owen was born and raised in Bly and left to Paris to train to become a chef. But he had to come home to take care of his sick mother. Towards the end of the conversation he states: “The whole town’s a big gravity well. It’s easy to get stuck.” Which if that isn’t a big red flag for future episodes, I don’t know what would.

After asking to walk the rest of the way to the Manor, Dani meets Flora Wingrave (Amelie Bea Smith) who sits at the ponds edge, singing the same song as Gugino’s narrator. When Dani asks about the song, Flora expresses she wasn’t singing. Concerning. Flora offers to show Dani around the grounds and to meet the others. Before they leave, Flora warns Dani to never go into the pond and she leaves behind a small handmade doll by the waters edge.

They come across Mrs. Grouse (T’Nia Miller), the housekeeper who is very preoccupied by a well, and Miles (Benjamin Evan Ainsworth) Wingrave. Who acts much older than his age. Everyone goes back to the house where Flora walks them through the house, calling everything and everyone ‘splendid’. They come to the parents wing of the house, where Dani is warned it is off-limits. Which I’m sure she will completely abide by for the rest of the season.

After being shown to her room, Dani is in the middle of ‘freshening up’ when she catches Miles peeping on her. Concerning. Miles apologizes and gives her a butterfly pin before leaving.

During dinner, Dani opens up about wanting to see the world before questioning why Owen is leaving early. Mrs. Grouse reveals that Owen’s mother was quite sick, and contrary to what Owen says, his mother is not doing better. Mrs. Grouse excuses herself from the table, claiming she will eat later. Not too concerning at this point, but still a little strange.

Flora becomes upset during bath time when she spots Dani wearing the butterfly pin. She tells Dani that the pin belonged to Miss Jessel and should give it back. When Flora looks behind Dani, somehow communicating with something that is very much not there. Concerning. Soon, Flora says she has permission to keep it. Moments later, Dani sees the glowy-spirit in the bathroom mirror. She stares it down before wiping away at the built up steam, causing it to vanish.

At bedtime, Dani tells Miles that he can tell her anything, even about the boarding school he was suspended from. Dani goes into Flora’s room, where Flora plays with a scaled model of the Manor and dozens of homemade dolls in varying levels of creepy. When Dani comments that Flora needs to learn to pick up her toys, Flora becomes unsettled when Dani picks up a faceless doll from under the dresser, demanding for her to be put back. Before Dani can leave for the night, Flora gives her another warning: do not leave the bed at night, and only come out once its morning.

A restless Dani ventures out of her room to make herself a cup of tea. As she waits in the kitchen, the faucet begins to drip and creaking begins to amplify. Dani goes out into the hall to see where the noise is coming from then – the tea kettle begins screaming. Dani shakes it off, gathers her tea and a biscuit, and heads back to bed. Without knowing of the shadow lurking behind her.

The next morning, during their walk, Flora expresses how unhappy she is with Dani for venturing out at night. When Dani asks why shes concerned, Flora responds that she doesn’t want for her to find her. Who is she? The Lady in the Lake. Miles comes back, scaring Flora off before Flora can expand further on the Lady in the Lake.

As they return from the walk, Dani spots a man on the parapet. When she waves, and he does not return the greeting, a sudden whoosh is heard – he’s gone. Dani runs inside to lunch where she brings up the man to Owen, Mrs. Grouse, and the gardener, Jamie (Amelia Eve). They dismiss the vision as being a townsperson who ventures through the gardens. Mrs. Grouse, once again, does not eat lunch. Which, now, is concerning.

Dani ventures through the house and gets to the parapet. Here, she discovers one of Flora’s straw dolls. But she is distracted by a lights in the chapel. At the chapel, Dani finds Mrs. Grouse praying before candles lit for the dead. Which is strange since four are lit and we only know about three – the children’s parents and Miss Jessel. We also learn that ‘That Man’ brought down Miss Jessel and took off with most of the Wingrave money. Mrs. Grouse also retorts that Flora’s dolls are like talisman’s, meant to keep the family safe after Flora found Miss Jessel dead in the lake.

Miles is acting on another level of Weird, asking Dani about playing games. Dani talks to Flora about the talismans and tells her that she should keep herself safe first, and leaves the straw doll with her. But on her way out, Dani kicks the faceless doll. When she turns to Flora, Flora is sitting up, scared. Miles pops in, asking about for a fan, claiming he cannot sleep without it. Flora confirms that its in her cupboard. When Dani goes in, the children lock her inside and refuse to let her out. Dani panics and begins to breakdown when she sees a mirror in the cupboard, with the glowy-eyed spirit. After an indiscernable amount of time, the children let Dani out. The faceless doll is back under the dresser.

Dani goes back into the dark hallways and sees muddy footprints everywhere upstairs. She begins to follow the footprints out the front door, and into the foggy front garden. When Dani turns around, she sees the children watching her from their bedroom windows.

To catch up on The Haunting of Bly Manor news and other episode recaps, check out our tag here on Downright Creepy.