The Haunting of Bly Manor: ‘The Pupil’ Becomes Perfectly Dreadful 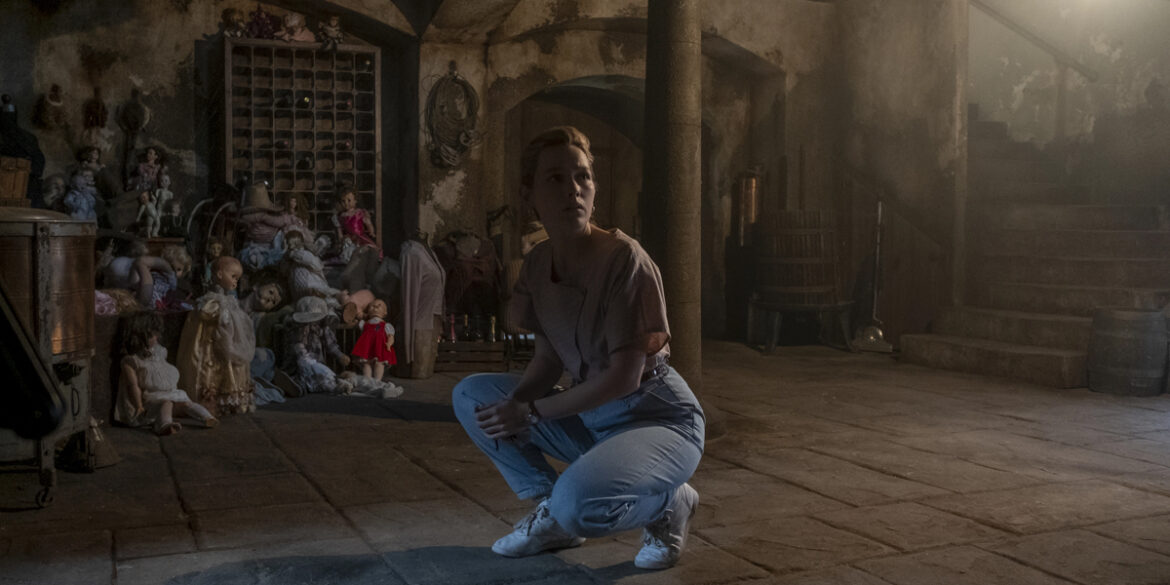 Before you catch up on the second episode of The Haunting of Bly Manor, make sure to check out my episode 1 recap, here on Downright Creepy.

After the exposition-heavy premiere, I was so ready for the scares to exponentially increase. However, ‘The Pupil’ follows its predecessor with filling us in on the information about Miles’ mysterious suspension from boarding school and our first looks at some of the more sinister beings in Bly Manor. Although there aren’t too many spooky scenes until the last act, the intensity of unnerving actions and reactions from our main characters will keep you on the edge of your seat.

And, as always, read at your own risk, spoilers are below.

We open on Mrs. Grouse mopping the muddy footprints where we learn from the narrator that this is a thing that happens multiple times a year, and always follows the same path to the forbidden wing and back.

After, Miles tries explaining that the cupboard door was stuck and the footprints were ‘just a bit of mud’. Dani accepts their apologies but doesn’t believe them.  Flora grabs the faceless doll form under her dresser, but before she can make a point, Miles grabs it and tosses it down the laundry chute. In a shocking turn to Mrs. Grouse, Dani has Miles mop up the footprints. After all, it’s just a bit of mud.

As Dani and Flora pass through the kitchen to get to the cellar, Flora asks to stay behind. ‘It’s perfectly dreadful’, she says. Flora stays behind under the watch of Owen. Dani enters the cellar to find the light switch doesn’t work. Because of course it doesn’t! Nothing bad ever happens in dark cellars!

Upstairs, Flora tells Owen that Miles truly isn’t a bad brother. Strange, but ok. Down in prime scaring territory, Dani gets the faceless doll. We stay on a wide shot of a pile of dolls, that, you guessed it, one begins to move after Dani leaves.

Dani tries asking Flora about the faceless doll, who according to Flora, ‘doesn’t remember her name’. Then Dani tries asking about the straw talisman, but Flora claims it doesn’t work. Spooky. As they get to Flora’s room, Dani realizes Miles is nowhere to be seen. On her search (and past a ghost child), she finds Miles staring out the schoolroom.

It’s Miles’ first day of boarding school after winter break. Father Stack announces that a classmate is staying home due to ‘taking a tumble’. Miles glances back at the empty desk – foreshadowing? I think so. During the class discussion, Miles asks several questions about demonic possession. Which, as you know, is a giant red flag. It can also resolve the question of why Miles acts so much older than his age and is a giant creep at times. Before he leaves class, Father Stack hands him a letter from Flora and offers to be a source of confidentiality for Miles and tells him to turn to John 16:22. Which you might have guessed, yes talks about the dead not really being gone.

Some normalcy at last! Miles and Hooper climb trees like perfectly normal boys. Hooper warns Miles about being so high in the tree, and when Father Stack calls out to him – Miles falls. It’s not clear here whether he jumped because of the trauma he has endured from the past year or if he was influenced by something. My guess? Demon from Bly. When Hooper asks him about what happened later that night, Miles tells him he was looking for a ‘key’. Which, yeah, I have no idea what that’s about.

Over the next few days, Miles engages in some next-level behavior. He almost chokes out his friend Hooper, he sneaks into the church and leaves behind Father Stack’s dove, which has now been strangled, on the altar, and refuses to comply with the school’s requirements for him to stay. As Hooper is clearing out the dorm bunk beds, he finds the letter from Flora. ‘Come home’ it says, accompanied by three figures. My best guess? Flora, Miss Jessel, and the man who brought her down.

Dani watches over Flora as she cleans her room. When Dani leaves to check on Miles’ room, Flora keeps hold of the Victorian baby-doll. I think it’s the same one that moved in the cellar, but we’ll talk about that more in another post.

Down in the kitchen, Mrs. Grouse stares at a crack in the kitchen wall. Yet again, we don’t see Mrs. Grouse consume food – is she a supernatural being of some sort or just superstitious about eating at Bly Manor? Jamie walks in where she gets informed about Dani putting the kids to work. So naturally, Jamie enlists them to work on the gardens. Mrs. Grouse, Jamie, and Owen share ‘Christian concern’ over Dani’s abilities. Jamie teases Owen over how pretty Dani is, making him tongue-tied. As a flustered Owen leaves, Mrs. Grouse asks Jamie to fix the crack in the kitchen.

Back inside the Manor, Dani finds that Flora has cleaned her room and is now donning a pair of broken round glasses. Who’s are they? Dani becomes overwhelmingly upset over it and escapes outside, and cries next to a topiary. Jamie finds her and reassures her that she’s doing just fine.

Jamie goes to fix the crack, but when she gets to the kitchen, it’s gone. She catches Miles in the house, who answers her back with ‘Jamie darling’. Gut feeling? Demon possession again. Meanwhile, Dani washes her hands in the bathroom, and who’s in the mirror again? Glowy-eyed spirit. She quickly opens the medicine cabinet door, sending him away. Also, the glowy-eyes are in the shape of the glasses Flora had before, right? I’m beginning to connect these dots.

Things Are Getting A Little Spooky

The gang is in the kitchen when Owen delivers a pun that I still groan at. The other ladies agree as they all collectively give him grief about it. Miles comes in, announcing that he needs to speak to Dani privately. While Dani goes with Miles, Flora answers the phone – another ‘prank call’. In the hallway, Miles apologizes for what mischief has unfolded including excusing himself for childish behavior because he forgets himself when Flora is around. He then produces roses for Dani and, very creepily, tucks strands of hair behind Dani’s ear. Say it with me: Possession.

Out in the gardens, Dani and Jamie discover the source of Miles’ bouquet. Jamie explodes about this and Dani has to calm her down as she complains about them ‘not being ready’. If I had to guess, I’d say Jamie knows a whole lot more than she’s letting on. Or maybe there’s a body under the roses.

That night, after sending the children to get ready for bed, Dani tells Mrs. Grouse about a special surprise for the kids. Mrs. Grouse excuses herself from the surprise game. After her inspection, Dani announces that they can play a game because of their hard work. Flora offers to play hide-and-seek. Because that is the perfect thing to do in a haunted manor. At night.

Then Dani is off to look for the children. As she searches the house, she comes to the schoolroom, where, unbeknownst to her, a black dress wearing ghost stands in the background. As Dani turns around, the black dress ghost disappears. Naturally, Dani is drawn in that direction. Unable to find the kids, she heads to the forbidden wing. She uncovers a family portrait, and is brought out of her reverie by a music box playing ‘O Willow Waly’. Not spooky at all.

We go to Flora, who sits behind a chest in the cellar? Attic? As she is humming the song mentioned previously, we hear and see a red gown wearing, faceless spirit. Flora, with her strange connection with the ghosts in Bly, just shushes her.

The Man in the Window

Back with Dani in the forbidden wing, where she has now found polaroid’s of a young couple (Oliver Jackson-Cohen and Tahirah Sharif). As she gazes at the pictures, Miles sneaks up behind her, wrapping his arms around her neck, and slowly choking her. He takes off through the house, with Dani yelling about the game being called off. When she reaches the first floor, she sees the reflection of the man from the parapet. She grabs a fire poker and runs out, shouting about calling the police. She turns and sees Miles in the window, who suddenly faints.

Mrs. Grouse comes to the sitting room and sees Miles on the floor. After warning Mrs. Grouse about the intruder, Mrs. Grouse heads off to lock up the manor. However, the man is back in the reflection, staring in at Miles and Dani.

If you haven’t checked out my recap and review of episode 1 ‘The Great Good Place’, check it out here.