Review: ‘The Nun’ Has A Bad Habit Of Conjuring Nothing But Jump Scares

No one ever wants for a movie to be bad. Plain and simple. Specially when it comes to major studio horror releases. So often they’re judged even before they get out of the gate. Sometimes it’s warranted. Sometimes not. One company though, has been able to tap into the genre, through movie going public: Warner Bros. With IT: Chapter 1, they found a hit on their hands. Coupled too with the surprising success of their Conjuringefforts, they’re able to churn out horror offerings that largely turn a profit. By comparison, their latest outing stumbles a bit. While not an outright disaster, The Nunleans too heavily into cheap tactics, than relying on the natural atmosphere it initially creates.

In the early 50’s, outside Romania, a young farmer finds a hanged and partially eaten young nun. The Vatican (seriously) receives word and dispatches Father Burke (Demián Bichir). Burke helps the church as a sort of “miracle hunter”, though past endeavors have ended in exorcism. Tagging along, via Vatican suggestion, is Sister Irene (Taissa Farmiga), a postulant. This fact is constantly restated, by having every single character utter “you haven’t taken your vows yet!” You know, no foreshadowing or anything. Lead by the farmer, the trio head to the castle, to investigate if the grounds are still holy.

So much of The Nun exists simply to tie back into the growing Conjuring Cinematic Universe. It starts and finishes with footage of the Warrens, attempting to create a tidy package. Much like the two Annabelle films though, the scant few scenes of which the terrifying specter is featured there, is by far more effective than ever done so here.

The basic problem is, the story adds up to nothing. It’s a sham. A haunted house of only one horror. When nervously re-entering the castle late in the film, Sister Irene points out the ever growing pool of blood on the front steps. “Another puzzle” states Father Burke. Yet it’s just one a dozen that have no resolution. Mythology is hinted at, but never actually explored. Even the supposed central figure gets the shaft in a film that’s supposed to work as their “origin story”. It’s hard to justify the existence of a film called “The Nun“, which continually relegates the titular character to the wings.

If you are over the moon for jump scares and only jump scares, then this is the film for you. The Nun approaches becoming Inception of jump scare films. Featuring jump scares within jump scares within jump scares. Just when you think everything’s safe and a musical sting won’t almost deafen you into submitting to the jump scare, it’s only because people are talking. You can tell when every scare is going to come, long in advance. When the camera pans to the side & starts to come back, there’s gonna be a jump scare. If someone is in a room alone and everything is quiet, there’s gonna be a jump scare. Should the story’s internal logic starts to get wonky, there’s….Ok, you get the idea.

What’s disappointing is that for all those misgivings, The Nun has stuff going for it. The atmosphere feels ripped out of a glossier Hammer horror outing. The sagging flesh and evil inside the church evoke elements of Fulci. At times, Director Corin Hardy (The Hallow) feels as if he’s got some special on his hands. Then the rug gets pulled out. The semblance of a story gets shoved to the back burner, hoping the cheap scares are enough to keep the audience awake.

The climax of The Nun is where things truly fly off the rails. Here the ridiculous, the preposterous and the unexplained slam together, bludgeoning the audience into a stunned state of slap happiness. None of it is traditionally good, but it’s so brazenly perplexing, it becomes enjoyable. That may be the most maddening aspect when it comes to The Nun. It flirts with completely insane ideas, but just goes no where with them. If the studio were bolder, it would have let the film bathe in weirdness. Creating something something wholly unique to the current big budget landscape. Instead it chooses to stick with the tried and true formula it knows will bring in the most money possible. Without a care as to how it effects overall quality.

The problem with jump scares are just that, they only make you jump. Merely momentary tension, releasing into nothingness. There’s often no lingering fear to what’s being shown during The Nun. At the same time, those scares can be effective to a general audience. Were there one group who need to be won over by horror, it’s them. In the end, maybe that’s not the worst thing in the world. Profitable movies can lead to more big budgeted theatrical  horror releases. That’s always welcome. Perhaps next time it’ll be one which places a premium on story construction. Rather than just an endless stream of jump scares. Or so one can hope. 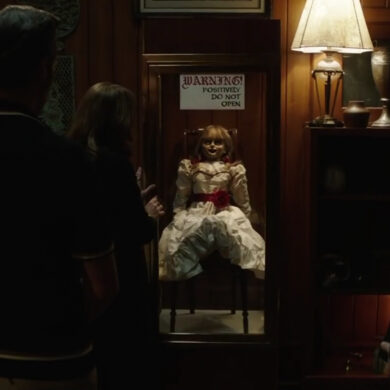