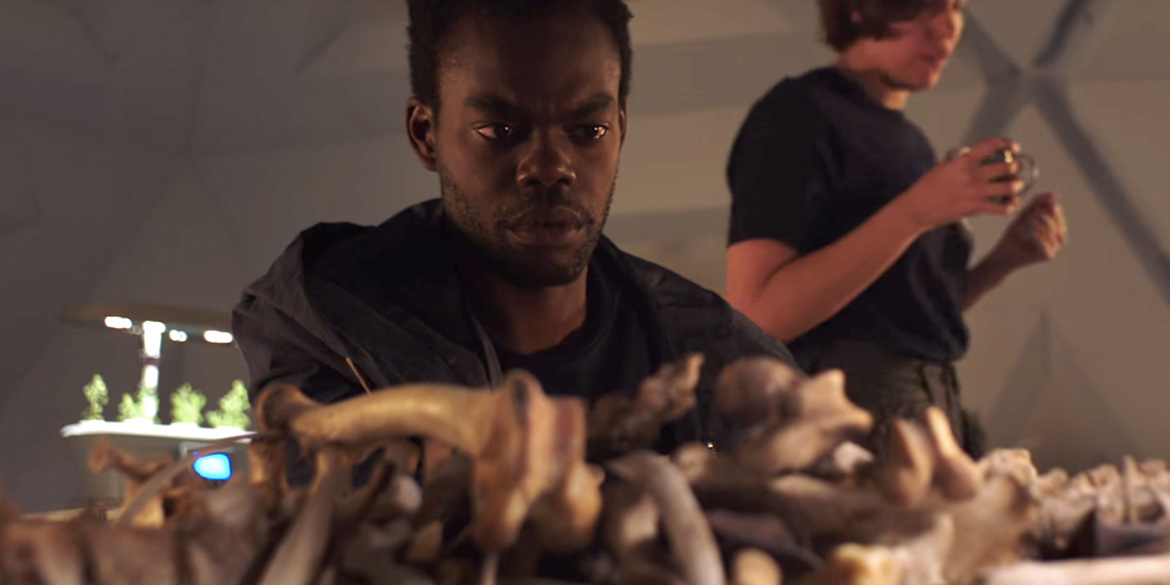 Horror and Science Fiction are two genre staples. Unfortunately, they do not cross over enough. Of course you have your ‘Event Horizon’ or ‘The Thing’ or ‘Jason X’. But unless your name is Ridley Scott, we don’t see many films coming out lately that are trying to bridge those two genres enough. The desire to see that bridge is what makes ‘They Remain’ so intriguing. Sadly, it’s slow burn plot mixed with an overused and uninteresting setting leads to a fair to middling adaptation of the Laird Barron novella “–30–“.

The film, written and directed by Philip Gelatt, is about two researchers who have set up what can only be described as a biodome in the woods. They work for a shadowy corporation and their mission is to investigate the unusual events that have been happening in this thicket. Animals aren’t acting normal and the environment is behaving strangely. Our two leads, Played by William Jackson Harper (The Good Place, Paterson) & Rebecca Henderson (Manhunt: The Unabomber, True Story), wonder to themselves if this strange activity is connected to a “Manson style” cult that used to live on the grounds.

Harper and Henderson are the really the only two actors in this film, and they are easily the best part of the film. Especially Harper, who won the best actor award at the Panic Film Festival. I’ve never seen him in anything before this, and his performance does feel like a secret I want to share with the world. I just wish the film he was in was serving his performance better. His eyes do such a great job of conveying the fear, confusion, anger and doubt he feels as the movie progresses. Henderson is also solid, although her performance feels a little wooden at times. I feel that’s what she is going for, but it didn’t completely work for me. There’s also complicated chemistry between the two where they must convey a concurrent feeling of attraction and distrust. These performances are of a high quality you wouldn’t necessarily expect to see in such a low budget film. Unfortunately, the filmmaking is exactly what comes to mind when mocking “modern indy horror”.

As I mentioned earlier this film is slow burn. That pacing decision is one of my big problems with the film. It doesn’t take long for the scenes to feel repetitive and dull. There’s a central mystery at play in regards to the cult, but we’re not given any details early on that entice to keep interested in that mystery. The film noticeably picks up in the second half, but I’m still not sure if the ultimate payoff is worth it. The film’s setting is also detrimental to its pacing as it’s only set in a handful of locations, the main one being outdoors in a forest setting. Add to that at least half of the scenes take place in full daylight. For me, there is nothing less visually interesting than surrounded by tees at midday. Kurosawa had a tough time making it work in ‘Rashomon’, so what hope does ‘They Remain’ have. To Gelatt’s credit though, he seems to realize this and does what he can do give us varied shots of the timer at dusk and dawn. The director also has some more inspired visual touches during certain dream sequences. Still, far too much of the film looked too generic and like another “horror in the woods” film.

The film’s budget also begins to show when characters are describing their past, or stories they’ve heard about previous expeditions to the area. When we hear those stories the camera is faxed on either Harper’s or Henderson’s face. Both actors are good actors and doing their best, but film is a visual medium and filming someone tell me a story is almost always less interesting than showing me that story. I will add that one element does a lot to cover up some of the weaker aspects of the plot and presentation and that is the score. It feels almost in the vain of a Johnny Greenwood work and perfectly matches the creepy and unsettling tone the filmmakers are going for.

I wish I could rave more because I found the work the actors were doing to be mostly inspired, but ultimately this film has a lot of issues. It has its good qualities to be sure, and I would give it a tepid recommendation and say you should check it out when you get a chance. If only for the awesome score and to see what I hope is the first in many lead roles for Williams Jackson Harper. I just wish the narrative had moved a little quicker and arrived at a more interesting climax.