Verónica, director Paco Plaza’s new horror release, is the hottest film lurking in the depths of Netflix’s recommendations. It was released to the streaming service with no buildup or fanfare, it isn’t even the only movie named Verónica on Netflix right now,  but it has quickly become one of the most talked about horror movies of 2018.

One of those reasons is probably the “true story” it’s inspired by. On a real Spanish police report from 1991, an officer from Madrid claims to have witnessed paranormal activity. The report has become the Holy Grail for paranormal enthusiasts in Spain, and Verónicais the interpretation of the mythos surrounding the incident.

Verónica (played by Sandra Escacena) has too many responsibilities as a Madrid teenager. She attends a Catholic girl school in the city, but she also holds the responsibility of taking care of her three younger siblings, Lucía, Irene and Antoñito. Their mother works constantly and their father passed away, the latter parent being missed so dearly by Verónica that she recruits her friends to perform a seance to hopefully speak to him.

As the entire school is outside looking at the 1991 solar eclipse, Vero and her two friends Rosa and Diana sneak into the school basement with a Ouija board for a supernatural Skype session. Thankfully the eclipse provides great wireless connectivity, because the girls get an answer back. Vero becomes overtaken by some unseen force, and she blacks out before awakened by the school nurse. When she returns home she is instantly under constant attack by this shadow force, and she desperately tries to protect her siblings from whatever she provoked.

Plaza effectively surrounds his protagonist with a disquieting and distrustful environment. There is no safe room in the family’s claustrophobic apartment. The constant needs of the children, similar to another recent horror classic The Babadook, drive Verónica’s confusion and paranoia.

One element and one element alone puts this movie squarely in 1991: Spanish grunge music.

In 1991, most teenagers were listening to Pearl Jam or some version of Pearl Jam. Verónica listens to (and even wears a t-shirt of) a Spanish grunge band by the name of Héroes de Silencio. Whenever Vero puts on her headphones, the band’s music comes on and helps create a sense of dread throughout the movie. The mood fits the film perfectly, and the band’s resemblance to Pearl Jam is uncanny. If Netflix subscribers turn on this film for the scares, they will stay for the grunge.

Verónica is not necessarily living up to its hype as Netflix’s scariest film, but it does provide a serviceable amount of scares to keep horror fans from switching back to Comedians in Cars Getting Coffee. This film is for the audience that loves watching falling picture frames and figures in mirrors. The acting from the teens and the children are fine, the standout performance easily goes to Consuelo Trujillo, who plays a haunting and wrinkly nun named Sister Hermana Muerte. Her presence alone adds an extra level of haziness and consequence to Vero’s actions. 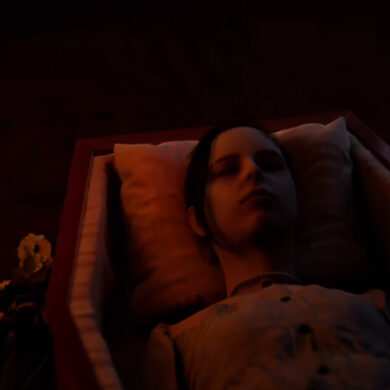