REVIEW: ‘Beyond the Woods’ and Perception Versus Reality

Mental illness is a tricky narrative element. It is easy for the story to slip into assumptions, misnomers, and downright falsehoods that our society has perpetuated through the ages. Mental illness in a horror film is event trickier, to use real sickness as a motivating tool of violence is damaging to the story and to those above mentioned falsehoods. In reality, someone with a mental illness is far more likely to be the victim of violence than to perpetuate it. So when the horror genre, or any art form, leans on mental illness to create villainy it can be anything from laughable to offensive.

In the film Beyond the Woods, written and directed by Brayden DeMorest-Purdy, mental illness is more than a simple element of the film, it is the entire film. Mental illness runs through every frame and slants the perception of everything we, as an audience, see. Using a unique variant of the unreliable narrator, the film shows us several realities, some broken and untrue, some impossible, and some that are assumedly true. ‘Assumedly’ because the audience is never fully given the map on narrative reality. We are given hints along the way and eventually a resolution that feels based in the communal reality of the characters in the film. But, can that resolution be trusted? When every narrative element has been supplied by a man struggling with a mental illness and has given conflicting accounts at every turn, can any reality be accepted?

That question is the real backbone of this narrative, both in a broad thematic sense and in the literal sense of the story. Within the story the realities are investigated by a police officer trying to place the pieces together in a very procedural way. In the thematic sense this approach captures the distortion of reality that mental illness can cause. Not to personally sneak into this critique too much, but when the main character takes the same medication as you do it is difficult not to peek in a little, but this broader thematic exploration is what was so appealing to me. Anxiety and Depression can distort everything. It can make a beautiful moment dangerous, it can make an innocuous moment stressful and all-important, it can stain everything a special tint of awful. So to see that portrayed on screen in such a visceral and visual way was both compelling and disturbing.

The film does not fall into the trap of mental illness as a trite narrative cliche of villainy, however. It uses it to explore reality versus perceptions. It explores how toxic your own mind can turn and ruin the environment around you. And without help, it can rot absolutely everything away. While this does not make Beyond the Woods an easy watch, it does make it a soulful one. It creeps along at a slow pace driven by long shot after long shot while presenting battling realities. By the time the credits roll, the audience feels pensive and a little morose.

In short, this film is challenging, but in the way art should be. It plants ideas and questions about what it means to experience something when our own minds can be in direct contrast to what we experience. What we do with those questions after viewing the film, though, is entirely up to us.

75
REVIEW: ‘Beyond the Woods’ and Perception Versus Reality 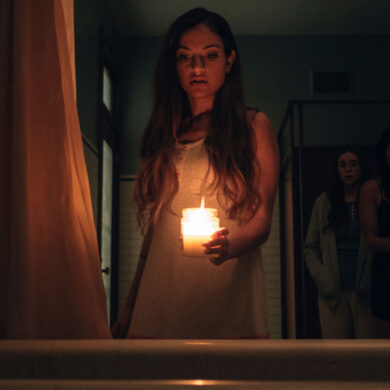