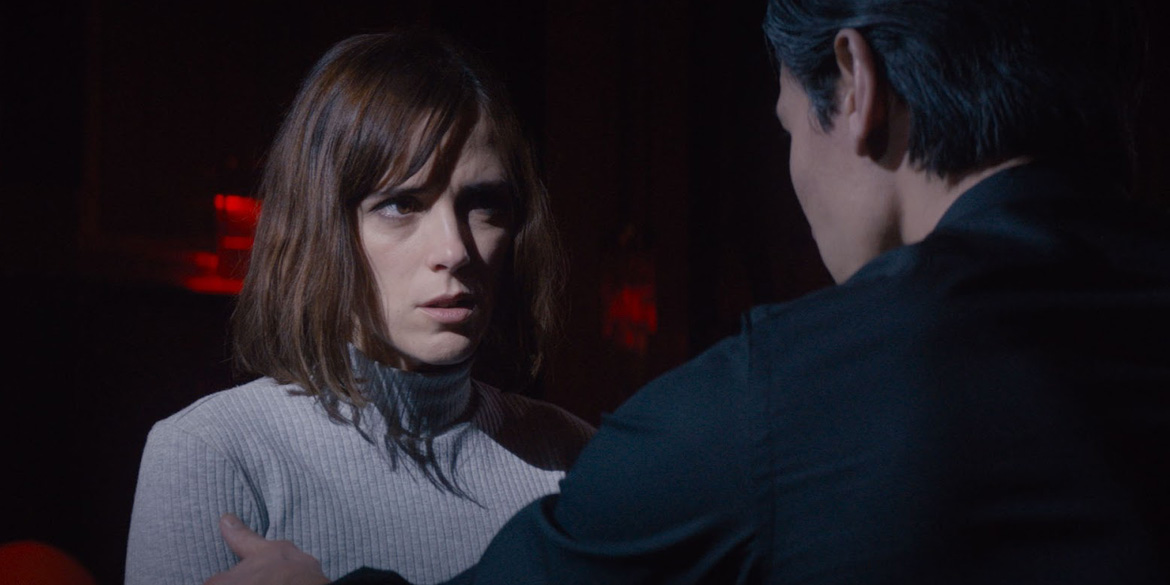 Dream logic. An evil phrase in cinematic terns. In the right hands, it can turn an average film into something truly special. Have a tenuous grasp of it though and everything happens to fall apart. Turkish filmmaker Can Evrenol should know this, as his stunning, horrific debut feature, Baskin, trod headfirst into that territory. Or maybe that was more so nightmare logic, given the images on display there. With his follow up, Housewife, he slows things down a bit, which may not be the best of moves.

Sometime in the past, sisters Holly & Hazel play with dolls, sequestered in their room. They’ve been instructed to stay there as their mother deals with “the visitors” and prays before a painting lit by neon lights. When Hazel fearfully sees she’s bleeding between her legs, mother drags her away, telling Holly to count to 100. Getting your period tends to be a death sentence in horror movies. Housewife is no difference. Things go from bad to worse Holly, who cares witness to a rather macabre scene. The results of which plague her for decades.

The adult version of Holly (Clémentine Poidatz) fills the titular role of housewife. Her husband, Timucin (Ali Aksoz) is an author and “esoteric researcher”. Normally that would add an interesting aspect to the proceedings, here it just means he’ll debunk future information by saying “I don’t believe that”. They appear to be happy, when celebrating their third anniversary. The sudden reappearance of a former friend (and lover?) sends things into a tizzy. When she invites Holly to a seminar for the cult ULM, “Umbrella of Love & Mind”, things get decidedly weird.

It’s here that Housewife turns it’s attention to that nebulous field of dream logic. Cult leader Bruce O’Hara (David Sakurai) professes the coming end of the world as well as the ability to “dream surf”. He looks ridiculous, in the way most charismatic personas do. Carrying an umbrella and dancing across the stage, before his “family”. The moment he touches Holly though and breaks through her barrier, things fly off the rails. Where once things were shrouded in mystery and compelling, they take a turn for the (surprise, surprise) more esoteric and weird.

Owing a fair share, at least visually to the Italian gialli genre, Housewife is stunning. Nonsensical, but stunning. Blues, reds and whites over take the frame at any given moment. Cinematographer Tayman Tekin does a sensational job. Every inch of the screen is packed to the gills with information. Even as things stop making sense, it’s still worth looking at.

The main problem is that Evrenol seem to be certain that weird imagery, in an of itself, makes for a compelling narrative. Nothing could be further than the truth. A music video? Sure. Short film? Absolutely. At times and with a runtime of just 82 minutes, Housewife skirts that edge. Maybe it would have been better suited trimming a bit of and fully embracing an experimental route.

If at some point you spend more time second guessing a film, or trying to chart what is & what isn’t a dream, rather than following the narrative, there’s a problem. That’s what ultimately sinks Housewife. Evrenol is a talented visual artist. No one can argue that. Yet too much of the film’s second half features characters acting and making in odd ways only for the curtain to be continually pulled back. Until suddenly it isn’t. After showcasing a feint within a feint within a feint, the last several minutes are indecipherable as to whether they’re happening or not. The film wants you to believe this is the endgame, but when people start emerging from toilets and the dead appear to be plucked from the time stream, it’s difficult not to show your hands up in the air.

In a strange way, there’s actually the perfect inverse comparison to what’s going on here. Panos Cosmatos made an engaging moody debut with Beyond The Black Rainbow, before countering with the phantasmagorically beautiful Mandy. Evrenol did that with Baskin and himself countered with the moody Housewife. It’s easy to compliment him on his sense of composition & nightmare fuel energy. What needs to improve is his command of story or better yet, team up with an established writer for a collaborative beast. That sounds like a potential masterpiece in the making. As for now, Housewife plays like a visually, viscerally stunning sizzle real. One that showcases a talented artist on the rise, if only someone can guide help him guide his vision in the future.