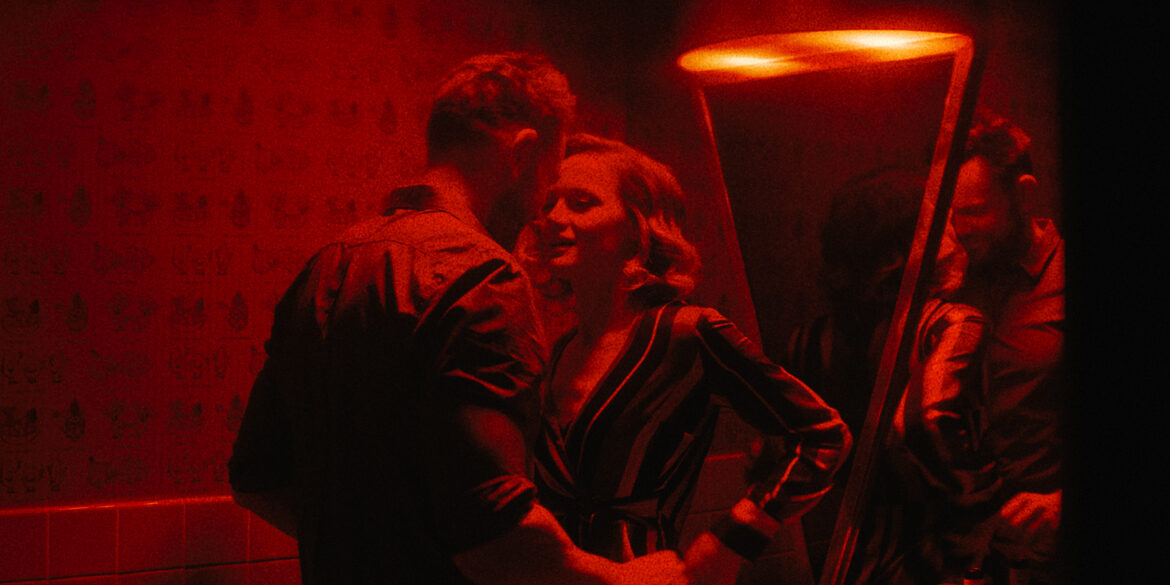 I refer to the superlative final scene of Billy Wilder’s classic comedy. After elaborately masquerading as a bass-playing woman and sharing an evening with a smitten millionaire played by Joe E. Brown, Jack Lemmon’s character reveals himself. “I’m a man!” he says, tearing off his wig. Brown responds: “Well, nobody’s perfect!”

Try as it may, ‘Happily’ does not boast an all-timer finale. It does, however, wholly devote itself to the idea that for better, for worse, nobody — and certainly no couple — is perfect. Where writer-director BenDavid Grabinski goes wrong is deciding that such an obvious thesis alone is enough.

The couple we zero on here appears to be the image of perfection. Tom (Joel McHale) and Janet (Kerry Bishé) have been married for 14 years and seem to have it all figured out. They have spontaneous sex daily and immediately forgive each other for tiny misteps. Dinner dates consist of across-the-table love note-passing and under-the-table dick-grabbing, much to the annoyance of their friends, who uninvite them to a couples retreat.

BenDavid Grabinski directs Tom and Janet’s eye-roll worthy “martian” behavior with an effectively detached deadpan — these two are oddities, for sure. There’s a satirical touch, and the focus remains sharp. It seems like we’re well on our way to a movie about facades of perfection that we put on, and the flaws that lie beneath an unsettlingly pristine exterior. Much to our misfortune, the film has a habit remaining only on the precipice of something great.

Our first major stumble comes with the arrival of a stranger on the couple’s doorstep. A suited mystery man (Stephen Root) apologizes for the couple’s “defect,” and offers an injection that would make them “like everyone else.” Again, there’s promise here: perhaps a mystery organization is assuring certain unhappiness! Or the couple is some lab experiment of the ‘Twilight Zone’ variety! Or Stephen Root has a personal vendetta! So many directions the film could go, but where does the script take us? To a couple’s weekend with the coldest adults on the planet. The film later circles back to the mystery man, but the character’s purpose is not grounded enough to make the thriller spin carry any real weight.

After the mystery man interaction goes…south, Tom and Janet are reinvited to couples weekend. Grabinski dilutes the script with four extra couples that don’t have enough room to breathe, filling a vacation house with uncomplicated caricatures. A cast of always-welcome additions including Paul Scheer, Breckin Meyer, Natalie Zea, Natalie Morales, Jon Daly, Charlyne Yi, Shannon Woodward, and more pile into the film but never get to play fully realized people, bless them.

Surprise: all of these couples are imperfect. Maybe even our beloved Tom and Janet aren’t so squeaky clean. Each pair harbors unaired grievances, all of which are treated as cookie cutter issues. These are very much adults who have been lulled into living comfortable lives of cohabitation and the occasional glass of wine. One standout party montage highlights the banality of adult small talk, even between friends. With rather uninteresting people to fill the screen, however, ‘Happily’ quickly loses our attention. Is it because adult couple life is boring? Or stuffy? And why am I so sleepy?

When at last the couples are forced to communicate, they spar for all of 5 minutes before retreating back into airlessness. Thus, the climax lands with a thud. To share a message about the reality of coupledom, we need to see characters treated like real couples. And with no follow through on its momentarily exciting twists, ‘Happily’ does not create a world outlandish enough for us to go along for the one-dimensional ride.

By the way, we never do find out what the actual, concrete deal is with Stephen Root and his lime yellow syringes. Eh, nobody’s perfect, right?

‘Happily,’ written and directed by BenDavid Grabinski, is now available theaters, digital, and on demand platforms.