Unwrapping Horror for the Holidays: An Interview with Douglas Pipes 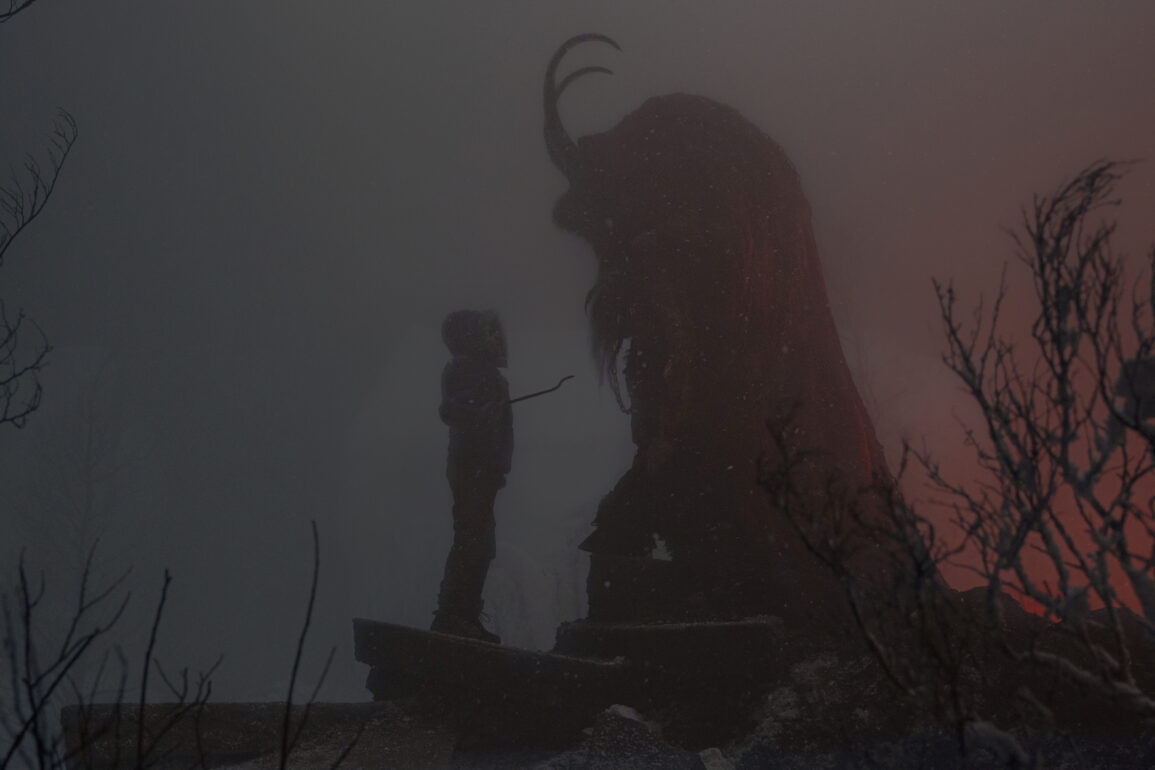 It wouldn’t be Christmas without Krampus. As much joy the holiday can bring, Krampus proves that there is a darker component looming behind the brightly colored lights and decorated Christmas trees. And if anyone can capture the spirit of the holiday (both merry and scary), it is composer Douglas Pipes. His work as a film composer includes features such as the Academy Award-nominated Monster House and Halloween favorite Trick ‘R Treat. Michael Dougherty‘s Christmas horror film, Krampus, won Pipes the “Best Score for a Comedy Film” in 2015 from the International Film Music Critics Association. The film features the horned mythological creature that torments kids who lose their Christmas spirit. I recently had the pleasure of speaking with Douglas Pipes about his influences and his work on the beloved holiday horror.

Can you talk a little bit about your background and what got you into composing films?

I grew up playing piano and being involved in music. When I graduated high school, I spent my grad money on a synthesizer and joined a band. While I was doing that, I got offered to score an independent film. I thought, “oh man, I can just sit in a room and write music all day long?! This fits my personality perfectly!” So, I did that and I got another one after that and really, really enjoyed it immensely. My biggest problem being a songwriter was always words because I’m maybe too over analytical on them so I was blown away with how this worked with my vibe as a musician, but I didn’t think I was any good at it. (laughs) I thought I needed to get better, so I went to university to study composition and orchestration to learn how to do it right. Later, I started scoring small student films. I did a score for Gil Kenan when we were at UCLA; We did four films together and his master’s thesis film was a hybrid animation. That short film got him an agency and a meeting with Robert Zemeckis and then he got Monster House. He brought  me along to do Monster House and everything took off from there.

Honestly, I never scored anything that massive before with a whole orchestra–it was an 85 piece orchestra. I was so fortunate it was an animation film because animation schedules take longer and I got to learn on the job. Sometimes, a film schedule can be so short so there’s more trial and error with all the processes, mock-ups, and demos. If that was a live-action film with that same score, I would’ve had six weeks to do it. My graduate school was basically Monster House.

How did you come on board for Krampus?

Michael Dougherty had seen Monster House and really liked it. He was also a friend of Gil and he asked me to score Trick ‘r Treat. Michael had been working on the script after Trick ‘r Treat as well as some other stuff with me for FearNet. When he finished, he called me up and sent the script over to read. Of course I loved it and we discussed capturing the essence of Christmas with the score, and I immediately began sketching ideas. A fair amount of time passes between finishing a script and a movie getting underway so it was, for me, like the longest Christmas Eve ever!

You did such a great job capturing the feel for Halloween with Trick ‘R Treat. How did you approach scoring a Christmas horror film while emotionally hitting all the notes that make the holiday so loved (and feared)?

For me the main thing is to always be playing to the characters, their emotions, and the atmospheres they would be feeling. Melody is very important, as is orchestration. For Krampus the choices of metallic instruments, a variety of bells, chains and such, as well as bones, other brittle instruments and of course voices. I felt those helped give the score a cold wintery feeling, all the while grounding it with Christmas melodies and a folk-like main Krampus theme. For the original thematic sketches I just recorded a string orchestra playing in an icy, wispy technique. The music is there to illuminate the story and it can do that in a few different ways. Melody is a big component to everything I work on because that’s the best way to get to the characters and their inner world in their heads.

How was it incorporating natural noises like wind into the score? It seems like the outdoor scenes in Krampus would be challenging to score since there is a lot of action on top of physical elements with wind and snow.

Sometimes when you are scoring against the high-pitched wind and other such elements, you orchestrate the score so as not to compete where appropriate. So lower deeper instrumentation when the sound effects are high-pitched so they complement each other. To set the tone, for the opening logos I recorded a choir of soft voices moving up and down like the wind howling through the trees and the baseboards, because the scariest thing about the wind is what it’s hiding, or what it’s bringing! Anthropomorphizing the wind and putting a human element into the wind was something we wanted to do in order to make it even more creepy.

Several Christmas songs like “Silent Night” & “Carol of the Bells” were incorporated into certain scenes. How did you go about choosing which Christmas melodies to work with, and how did you expand on those as a musical motif throughout the film?

Michael and I knew early on that “Carol of the Bells”, which is based on a Ukrainian folk song Shchedryk, would be a major part of the traditional melodic material. I also used fragments, distortions, hints and such of other traditional holiday songs in the public domain. These also help ground the score in tradition. Sometimes they are there in very subtle ways, sometimes very clearly represented, but present throughout the score to keep the sense of Christmas firmly woven into the fabric of the score. It would be a great game–I won’t say a drinking game, but I could say a drinking game–trying to spot all the melodic fragments throughout…sometimes they are layered against each other or going from one tune to another. But if you had a drink for every time you heard a melody like that, you wouldn’t make it through even ten minutes of the film. Mike and I talked about how no matter what is happening, the Christmas spirit has to be present all throughout this film. It can never go into just a horror film; it always has to be a Christmas movie. It’s also the main message of the film: if you’re going to survive, you have to keep the Christmas spirit alive. So the music is there to keep that in tune. This is the Krampus version of keeping the candle lit inside the pumpkin–that music is the candle.

In “Omi’s Theme” there is a reference to the school bus massacre from Trick ‘R Treat. I wanted to create a super subtle kindred spirit between the two stories. It’s not obvious, it’s definitely subtle but if you hear it, you’ll get it.

I love that. It’s also cool how her story is rooted in stop-animation. It makes me think of a throwback to old-school Rudolph the Red-Nosed Reindeer from 1964.

Yeah! I think that helped in aspiring the film to be a timeless classic. Any holiday movie, the greatest aspiration is the one that everyone pulls out every year. I think that was an incredible way to give it that sense of tradition.

Since Krampus has roots in German folklore and the grandmother in the film is German, how did you incorporate German musical and folklore influences into the score?

The main way was to create a theme for Krampus that was rooted in a folk-like style. The original sketches I had the melody played as if a town fiddler, just to help me get to what would be the foundation of the main Krampus theme. Of course this fiddler folk melody version never appears in the film, but it was elemental in creating the score.

There is such a duality with Christmas and the holidays, in general. It’s a merry time commercially, but there can also be a lot of pain associated with the holidays as seen in Krampus. How do you approach that emotional duality aspect with your music?

I have to focus on the characters. Holidays for many people are a battle between joy and maybe a tinge of sadness or longing, maybe melancholy or even depression. If the characters have these emotions running through them, sometimes the music will help illuminate that, or sometimes the juxtaposition of more festive music will more effectively really drive the point against a character’s performance. With Krampus things get pretty dark, but hopefully the score kept the Christmas spirit alive even in the greatest depths.

You’ve been compared to composers like Alan Silvestri, but I’ve also heard bits reminiscent of Jerry Goldsmith. Can you discuss your influences and what scores made you passionate about pursuing a career in this industry?

Any comparisons to these composers is truly humbling. I listened to a lot of film scores when I was starting out and studying composition, as well as all the orchestral composers of the concert hall. John Williams’ scores have always been a great inspiration, but I do feel a special fondness for the scores of Jerry Goldsmith for his bold experimentation and brilliant use of dynamics. Poltergeist, The Omen, Gremlins, and Magic are some of my all-time favorite scores. For Magic, the idea of those bellows being the lungs of the puppet. I mean, how perfect is that? It’s so genius! Aside from the experimentation, everything he’s done is wildly inventive. But the cornerstone, for me, is Poltergeist because it’s horror, sci-fi, fantasy, and these lovely lullabies. It’s heartfelt and childlike with this juxtaposition of danger. He made the ghosts scary but they’re also angelic and you’re in awe of them. The presence is both scary and otherworldly, like you want to stay and see them. He taught me that to really scare someone, it’s best if you can lure them into a place of comfort so they let their guard down.

You’ve successfully tackled two horror holiday films so far. If you were to score another, which holiday would you choose to set against a horror film and score the music for?

I was fortunate to bride the October – December horror film gap last year by scoring a wickedly fun Thanksgiving movie called Pilgrim. It’s a part of Blumhouse’s Into The Dark series on Hulu, directed by Marcus Dunstan, and it is a wild ride! It gave me a chance to do some rather fun musical writing with folk themes and faux hymns. It kind of reminds me of Beetlejuice in a way because there’s a funness of watching the movie. You’re into it and it’s violent, creepy, and bonkers, but it’s just an absolute blast to watch. And we had such a blast making that movie, so definitely seek it out! I also recently co-composed the score to Blumhouse’s Into The Dark July installment: The Current Occupant with my collaborator John Clement Wood, and we really got to get weird on that one…you can check that out as well on Hulu.

Waxwork Records released a gorgeous Krampus score, but they are currently sold out. I have my fingers crossed for a repressing though in the future! However, a compact disc version of Pipes’ score is available through LaLaLand Records.