For the while, horror felt like the redheaded stepchild of the film world, that no one talked about. Nowadays, at almost any time, the internet is filled with countless debates over what “is” or “isn’t” horror. The notion that such a topic can be trivialized so easily, is an unfortunate one. Further more, the very fact that filmmakers are scared to own up to the roots of their film, for fear of box office disapproval, is even more disheartening. All of this happening as a handful of films including The Neon Demon, It Follows, The VVitchor The Babadook(most from A24, no less) make horror more relevant than ever. For those who do venture into Hereditarythough, there’s no question to which genre it belongs.

Assured. That’s the key word when discussing Hereditary. And shocking. Those two words are tantamount. Or astounding. Yes. Assured, shocking and astounding. Only those three words are needed when talking about what makes Hereditary such an effective film. What Ari Arster does in his directorial debut is nothing short of impressive (Ok. So, that’s four then). Confident, mean, dense and weird as hell, this one has “instant classic” written all over it.

The Graham family is at a loss. Though the family matriarch has passed, they’re hard pressed to show it effects them at all. For Mom, Annie (Toni Collete), it’s as if a weight has been lifted. So controlling was her late mother, she’d even went so far as taking over breastfeeding duties when Annie’s  youngest daughter, Charlie (Millie Shapiro), was born. Either through supernatural forces or despair, the Graham house shifts in grandma’s absence. The family thinks nothing of it, because in the history of movies, grandma’s with secret pasts never come back to haunt anyone.

Around about thirty minutes in, a scene comes along and sucks all the air out of the room. Instead of allowing the audience to exhale, the frame lingers on what’s just transpired. And then it keeps holding. And keeps holding….till minutes have passed. In that notice, anyone viewing Hereditaryknows not to take anything at face value. From then on all bets are off. It’s a cold, cruel and devastating subversion, but one that also shows a level a confidence in what’s being don’t behind the camera. A move that almost feels cruel to dance around, as it’s a decision worth celebrating. One which pales in comparison to how the rest of the story plays out

Part of what ties everything together is a handful of amazing performances. The two that trump all others are Toni Collete and Gabriel Byrne, who also serve as executive producers here. Byrne has the tricker of the two roles. As a quiet and reserved husband, he stays well past someone’s breaking point, for he genuinely loves his family. Any praise he’ll receive is sadly short lived, as he shares the screen with Collette. An accomplished actress with a predilection for conflicted mothers and characters teetering on the edge of sanity, she absolutely demolishes any and all scenery. Don’t be surprised if weeks after release people are clamoring for awards in her honor. It’s the kind of role that actors dream of, but so rarely are found in films that flood the theaters.

Good horror is often akin to a magic trick. All seemingly pertinent information is dolled out upfront. Even if it’s not understood, or comes off as background noise. Only a brilliant combination of misdirection and showmanship are needed to dazzle an audience. The beauty’s not limited to the execution, but a film that’s just as mindful of the words it uses, as with the visual tools it paints with. Hereditary understands the conventions of its sandbox, exploiting them when necessary. Instead of relying on jump scares, he has rooms lit just this side of dim, barely concealing what’s hiding in the corner. Yet it just stands there. Arster understands knowing something is there and anticipating its action, is far more terrifying than jumping too soon. So he holds on these moments for what feels like an eternity. Like a mean spirited never-ending joke. Featuring the most sinister of punchlines imaginable.

Hereditaryis the kind of horror movie that’s sure to divide most audiences. It doesn’t conform to the normal everyday Hollywood standards. It’s content to move at its own pace, something that’s sure to rankle more than a few film-goers. And that’s fine, the fact that this movie exists is enough of a win.  This may sound just a tad hyperbolic, but after months and months of waiting, the hype from early festivals proves to be true. Hereditary really is one of the the most terrifyingly eerie films in recent memory. Strap yourself in tight, this one is going to stay with you for days. 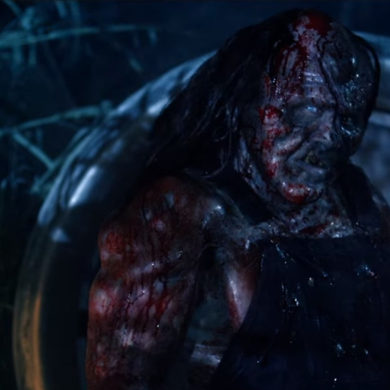