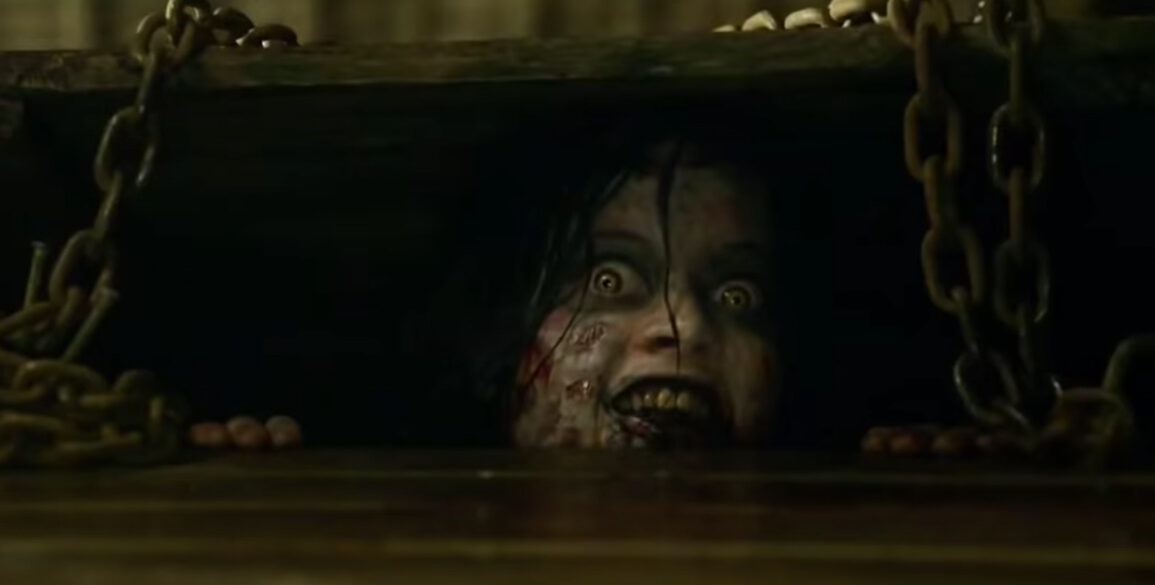 To define what a Deadite is, would be to encompass all things that create the atmosphere and universe that is ‘Evil Dead.’ From phantom hands cut off by chainsaws to a book of the dead that unleashes possessed demons in the woods that rape people. Cult collectible action figures to Bruce Campbell’s iconic chin. In 2013 we were asked to put all that aside and accept a new cast of characters over 30 years later to introduce a new chapter in the ‘Evil Dead’ franchise. Little did we know then but it would spawn a renewed interest in the beloved franchise. Spawning new toys, a TV series, another film and now the forthcoming video game. Proving we can’t get enough Bruce Campbell.

Fede Alvarez‘s re-imagining of ‘Evil Dead’ was a fantastic new chapter in the franchise. In his first feature film directorial effort he took on one of the biggest names in horror and tried to put his own unique spin on it while trying not to piss off a massive fan base that shows their devotion with Ash’s face tattooed on their chest and a fistful of boomstick in their hand.

Relying on practical effects versus the use of mass amounts of CGI was the first step to try and win over a horror audience that is often inundated with CGI ghost and blood splatters. Even when people told him a scene wouldn’t work, he stuck to his vision – and what that vision produced is a blood curdling, seat squirming theater experience that dares you to watch the next gruesome scene. It was a slow roller coaster ride into madness and I felt like each minute was more grisly than the last. At times I felt like I was being shot with a nail gun right along with the actors in the scene. Flesh being ripped open and limbs being sawed off would make even for the most hardcore horror fans flinch and grip their theater seat arm rest with a sweaty palm calling out mercy for those being inflicted with a demonic beating.

It’s not all blood and guts. There are nods to the original that can be found throughout the film, but overall it does a good job of establishing its own space in the ‘Evil Dead’ universe. Some examples include the iconic shot of a possessed woman in the cellar, the Michigan State sweatshirt, the blue station wagon, deer antlers on the wall and tool shed featuring a chainsaw and shotgun. Last but not least, the iconic cabin in the woods mantra which so many people have tried to duplicate since the original ‘Evil Dead’ – but have mostly failed.

The atmosphere Fede was able to create hit the vein of an ‘Evil Dead’ junkie spot on. After all, Fede was a huge ‘Evil Dead’ fan so what better person to recreate the iconic set than a fanboy who is as driven and hungry as Sam Riami was when he made the original 1981 classic. The cabin sets the scene nicely for the pain staking events that lie ahead and let you know something isn’t quite right from the very beginning. But we all knew that, right?

Did the film live up to the original? For my money it most certainly did. Of course there have been huge strides in filmmaking since 1981 and that of helps the film immensely. But aside from the obvious advancements in filmmaking, the actors gave a very solid performance that is usually forgotten about in horror films in leu of blood, gore and special effects. The re-imagining is able to score high marks in on all aspects which is what makes it even better than the horror films and remakes that get pushed out all too often nowadays.

Now for the bottom-line – is it scary? That depends on what you consider to be “scary.” I’m not usually a person that likes a gore fest that sacrifices blood for acting and scenes that flow nicely together. But knowing it is all practical effects and the degree that some of the scenes reach, then yes it is scary. Or at the very least hard to watch, in a good way. Will it make you jump out of your seat? Not necessarily. Will it make your stomach turn? Very likely. Reports of people fainting in theaters have popped up all over the country when this film was released in theaters.

Now we wait to see if Bruce will have any involvement in ‘Evil Dead Now’ as we already know he will be lending his voice to the ‘Evil Dead: The Game.’

In closing I’d like to pay homage to Bruce Campbell, even though he isn’t technically in the remake, and give this 4.5 / 5 Chins. 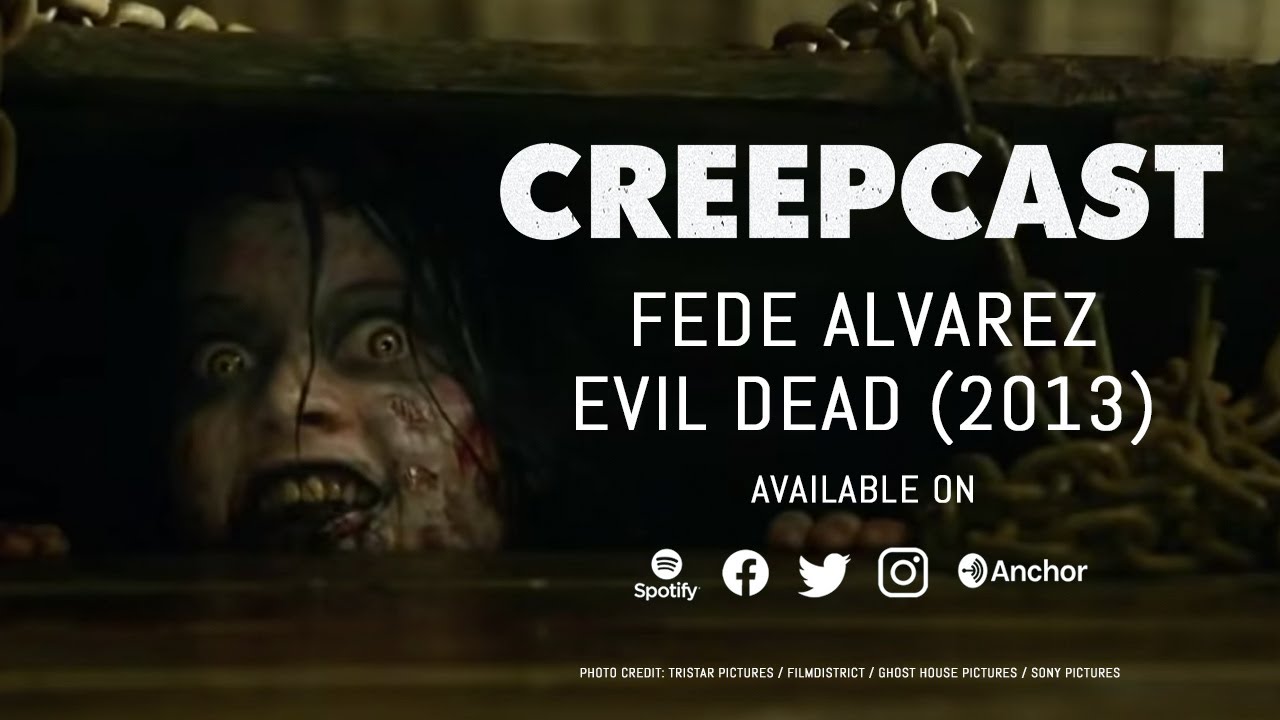 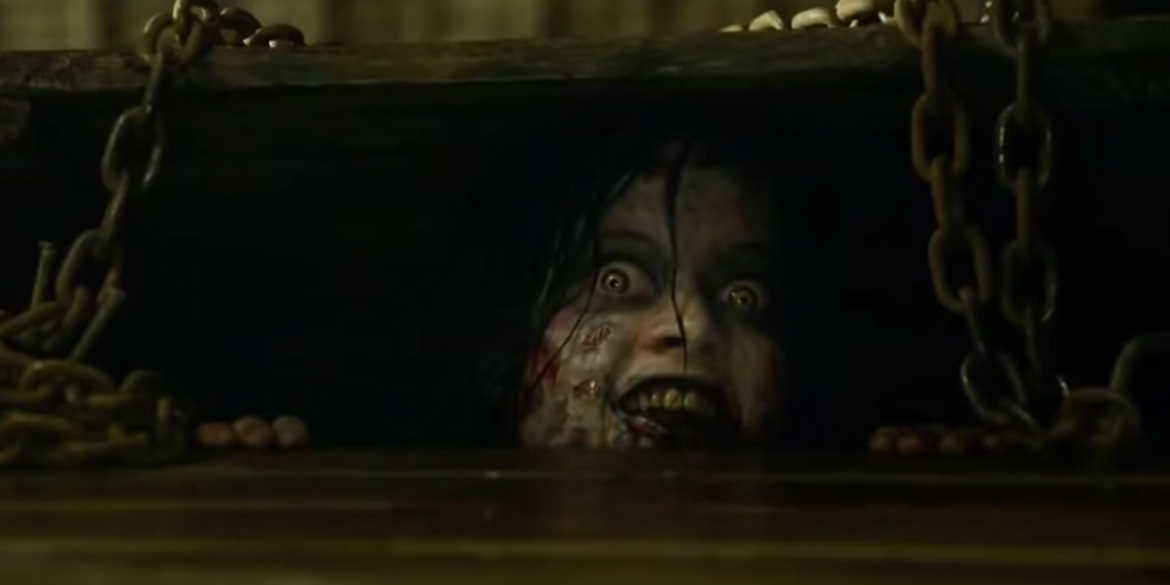