REVIEW: ‘M3GAN’ is a Campy and Cautionary Tale 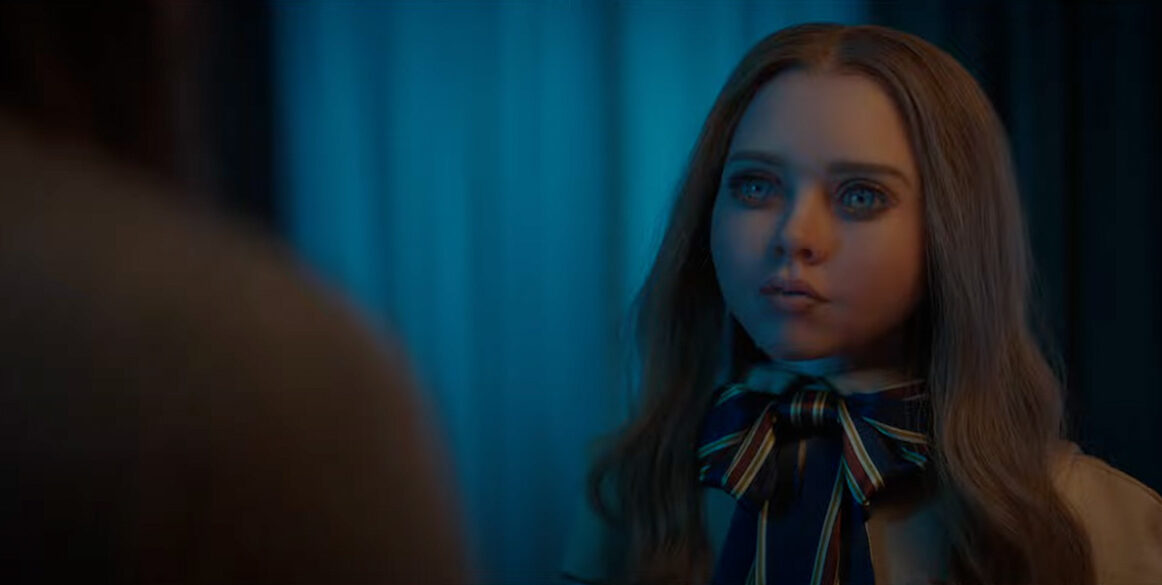 ‘M3GAN’ is not a horror-comedy. It is a damn funny horror movie though. Directed by Gerard Johnstone, ‘M3GAN’ is Johnstone’s second feature film following ‘Housebound’ (2014), another comedic, yet effective, horror movie.

Starring Allison Williams (’Get Out’, ‘The Perfection’) and Violet McGraw (’Doctor Sleep’, ‘Haunting of Hill House’), the film has a pretty— for lack of a better word— goofy premise. In addition to this, the movie’s trailer immediately sets the tone, and let’s the audience know it doesn’t take itself too seriously, and neither should they. This is by no means a negative, but simply that it is self-aware; this opens up a whole realm of possibility for a comingling of horror and humor that ‘M3GAN’ certainly makes use of.

Written by James Wan and Akela Cooper you can clearly see their involvement in the film through it’s comedic absurdity, always almost crossing the boundary into laughability, but ultimately still managing to maintain a creepy or sinister atmosphere. At times the tone takes such an unexpected turn that you might wonder if it actually is intentional, but when you consider the pair’s previous work, it makes it clear that they know exactly what they are doing. The two also worked together on Wan’s 2021 film ‘Malignant’ which had a similar absurdity to it, but still contained countless unsettling moments, scares, and— something this films noticeably lacks— a hefty about of blood and gore.

The pretty minimal amount of blood (save for one scene towards the latter half of the film) is not surprising given it’s PG-13 rating, but based off of what is shown, the potential for a much bloodier and more violent kill scene is absolutely there. And that ‘potential’ isn’t just hypothetical. According to Cooper in an interview with the LA Times, the original script for ‘M3GAN’ was “way gorier.”

“Her body count in the script was higher than in the movie. It wasn’t a Gabriel [in ‘Malignant’]-scale massacre, but she did kill a bunch more people”

“There should be an unrated version at some point. … I heard it is on the books.”

To switch perspectives for a second, this lack of gore does create a space for younger horror-fans or those wanting to get into the genre to have a good laugh and a scare. Overall being more freaky over ‘scary’, the film is perfect for For established fans of the genre, there is so much to be appreciated about ‘M3GAN’ from the genuinely unsettling scenes showcasing M3GAN’s darkest capabilities; to the practical effects and methods used to bring the character to life.

As you watch the film, M3GAN’s unnatural movements make it difficult to pinpoint what exactly it is you’re seeing: is this computer generated or practical? And the answer is it’s both! Helmed by supervising puppeteer Adrien Morot, depending on a number of factors, M3GAN was created using a mix of CG, animatronics, puppets, and a real human actress by the name of Amie Donald.

Donald is quite possibly to ‘blame’ for M3GAN’s online virality and popularity. Of course, I am talking about the dance that M3GAN does in the trailer, which later led to it blowing up on Tiktok. Although M3GAN dancing was in the script, the kind of dance she was meant to do was a lot less flamboyant. However, Donald— a highly awarded competitive dancer— decided to improvise instead, and thanks to her M3GAN quickly became an icon online.

With a background in dance and gymnastics, Donald’s phenomenal physical capabilities bring the right amount of fluidity to balance the inhuman; and situate M3GAN perfectly into the territory of the uncanny valley.

When Donald wasn’t getting her groove on, the crew used a variety of other techniques to breathe life into Miss M3GAN. According to Morot in an interview with Variety,

“We had six or seven different puppets that were capable of doing different things. We had some of the head moving, eyes moving, the moving torso, and there were a couple that were capable of a full computerized range of movements[…] For every shot where she would be seen walking in full or dancing in a corridor, that would be Amie wearing a mask”

For facial expressions, CG would be used to superimpose expressions on Donald’s mask, which they had previously shot using one of the animatronic M3GANs. Only about two or three shots in the film are entirely created using CG.

Despite being a ‘viral’ horror movie, ‘M3GAN’ does not disappoint. Usually, horror films marketed using Tiktok or relying on internet virality tend to be out of touch, or are built on preconceived notions of what ‘teens like’ or what large companies think the culture wants at any given time. Luckily, ‘M3GAN’s self-awareness lends the film more of a campy, ridiculous sensibility. An perfect instance of this that really appealed to me— and seemingly the rest of the theater— is a scene containing a certain 2011 pop song, that I won’t spoil here, but rightfully caught everyone off guard. This is absolutely one of those films where you want to catch it in a theater full of strangers.

We might be inclined to view M3GAN as a hyperbole; as just another irrational, technophobic nightmare, that even if it were to be true, it wouldn’t be for another few decades at least. However, M3GAN might be a lot closer than you think; as in a current reality.

Now, this doesn’t necessarily mean there are 4 ft. tall robot girls stalking the streets for their next human victim, but the questions and disturbing implications that ‘M3GAN’ raises are absolutely already here.

If you’re a fan of Netflix’s ‘Black Mirror’ I’m sure you’ve already been made aware of the technology that inspired the season 4 episode ‘Metalhead.’ From the Boston Dynamics robotic company, their robot-dog— aptly named Spot, is an “agile mobile robot that navigates terrain with unprecedented mobility. In ‘Metalhead,’ eerily similar looking robots hunt and kill human survivors of an unexplained collapse of humanity. Searching videos of these real-life inspirations is impressive, but makes you wonder how such a technology might be used if/when recklessly put into the wrong hands.

A much less blunt and brutal example comes less from the technology itself, and more from the way we interact with new technology. After spending basically all of her time with M3GAN, Cady (Violet McGraw) is briefly separated from her and declares, “when Megan’s around I don’t feel like this”— referring to feelings of grief, loneliness, and depression after the death of her parents (which is not a spoiler since it happens at the very beginning of the movie).

Similarly, we often use technology to take our minds off of negative feelings or situations in our lives. The film also points out how vulnerable people tend to be even more at risk for a codependent relationship with technology, and the negative consequences such a relationship might bring. Ultimately, the question of distraction vs solution is begged.

Cady’s loneliness is only exacerbated by her aunt Gemma’s (Allison Williams) meticulous nature. An innovative, technological genius, Gemma’s aloofness makes it difficult for her to properly consider Cady’s needs. At one point in the film, another engineer questions Gemma’s use of M3GAN to essentially parent Cady for her; very frankly paralleling modern problems that arise at the intersection of parenting and technology. The decision comments on the idea of ‘ipad parenting’ and asks how exactly is the prevalence of technology in our lives affecting children. Cady and M3GAN’s (eventual) dangerous relationship warn of the real-life dangers of unsupervised technology use at a young age.

Other things like voice replication— which M3GAN uses for not-so friendly purposes— are other current technologies that have already had ethical and legal problems around how such technology might be used to do more harm than good. A.I art has recently raised concerns about technological advancement superseding ethics for the sake of advancement itself.

‘M3GAN’ has everything, from a killer doll with sweet moves too layers of commentary about technology in our lives. With a sequel already in the works, it shouldn’t be too long before we see the next M3GAN model on our phone screens once again, making sure we catch her on the big screen for round two. 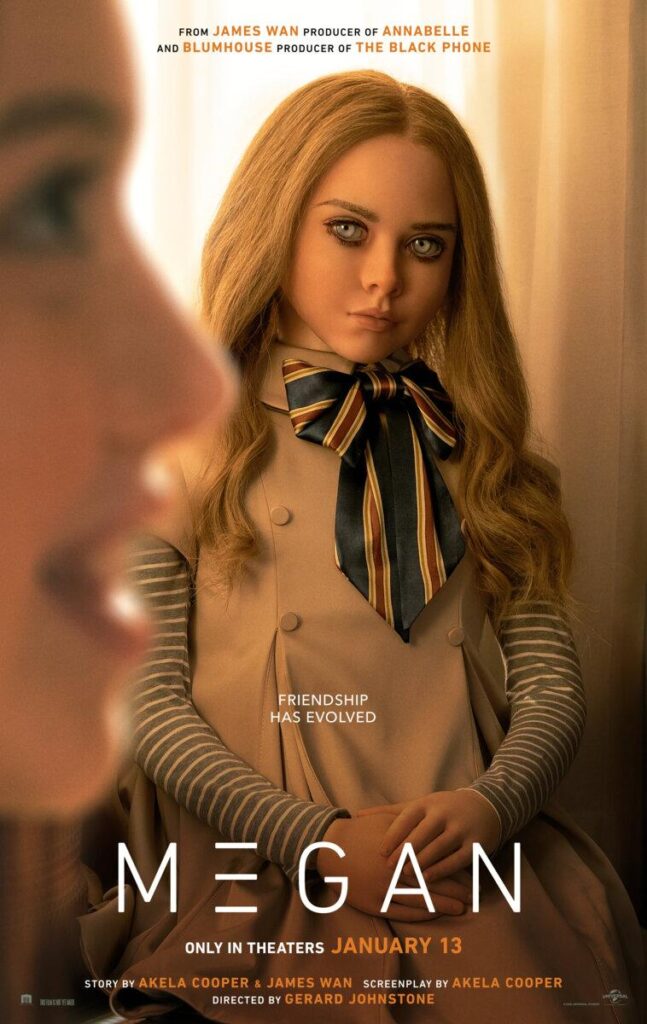 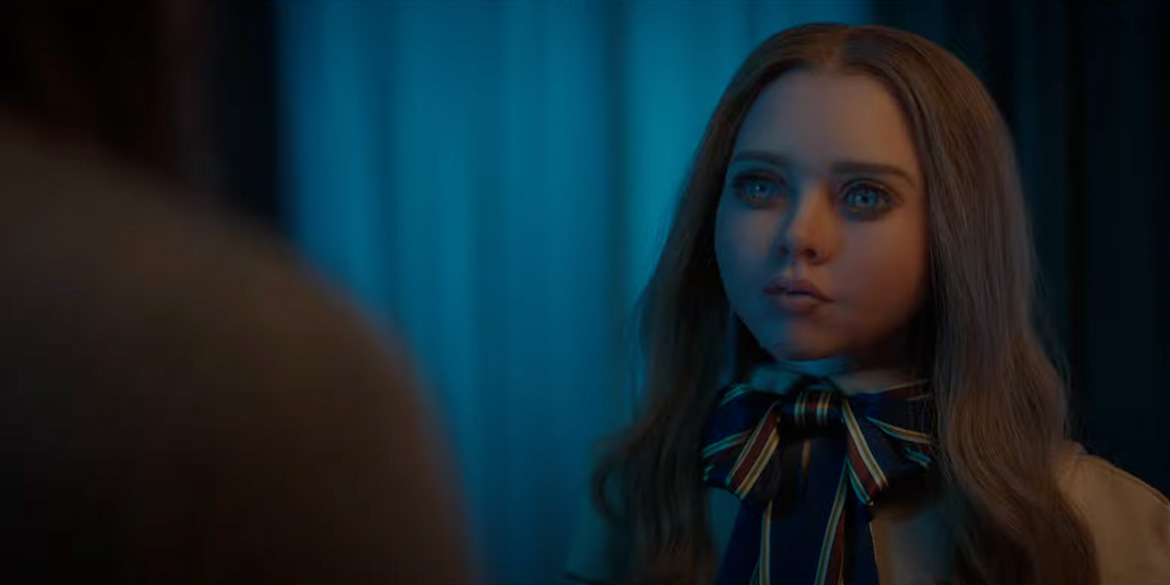 REVIEW: ‘M3GAN’ is a Campy and Cautionary Tale
85